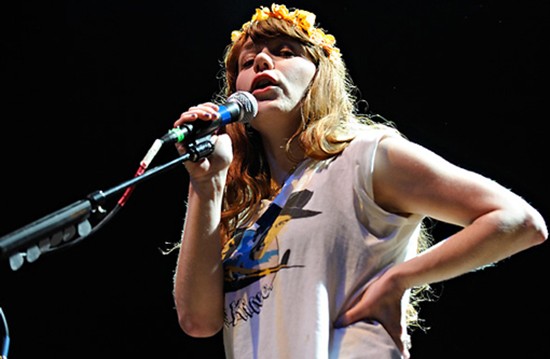 This is the week where we throw a bone to the gamers out there. On Monday night, chiptune artist Solid State Disaster opens for Japan's Melt-Banana with an 8-bit squalor made through two Nintendo Gameboys jacked into the Firebird's house system.

And this weekend, the St. Louis Symphony hosts Distant Worlds at Powell Hall for two nights of live performances and video projections from the Final Fantasy video game series, while Action Bronson caters to another world of nerdom on Tuesday at the Ready Room -- the rapper actually hosts a foodie Web series called Fuck, That's Delicious, sponsored by VICE.

Melt Banana w/ Braining, Solid State Disaster Monday, May 11 The Firebird 8:30 p.m. | $14 By Daniel Hill Tokyo's Melt-Banana has been pulverizing the brains of its listeners to mush for nearly 25 years now. Fans of the venerable noise-rock outfit know its boundary-obliterating modus operandi well by this point: Expect melodies buried under a mountain of distortion, laser sounds, barked vocals and thunderous bass, with tempos shifting from head-nodding to hyper-blur on a dime. Melt-Banana finds the common ground shared by noise freaks, punks, grind fans and open-minded indie-rockers alike, absolutely owning the center of that Venn diagram. (Disclosure: RFT contributor Joseph Hess is a member of Braining.)

Action Bronson w/ DJ Alchemist, Meyhem Lauren Tuesday, May 12 The Ready Room 8 p.m. | $30 By Daniel Hill March 23 was a pretty big day for hip-hop heads this year, serving as the release date for Earl Sweatshirt's follow-up to 2013's acclaimed Doris as well as Kendrick Lamar's huge return after 2012's good kid, m.A.A.d city -- two artists frequently named by critics among the most creative and intelligent lyricists working today. With all that noise, you may have missed Action Bronson's major-label debut, Mr. Wonderful, also released that day. His is an ambitious affair, a no-skipper featuring more experimentation than his past works, with production duties coming from the likes of Mark Ronson and the Alchemist, to name a few.

Death Cab For Cutie w/ The Antlers Wednesday, May 13 The Pageant 8 p.m. | $37.50-$45 By Diana Benanti From the RFT Music archives: This happens. Heroes grow up, their priorities change, their music changes, and truthfully we'd start to hate them if they kept playing the same shit year after year. But most of the audience has grown up right alongside these boys from Bellingham, Washington; our high school and college years were spent with Death Cab in tow, plaintively dripping out of our car stereos and iPods and stuffed into tender moments on Six Feet Under and Grey's Anatomy. They were the underdogs once upon a time, and while that ship may have sailed from the moment The O.C. showed Seth Cohen's bedroom with its Transatlanticism poster on the wall, the band has always managed to maintain a down-in-the-mouth façade.

San Fermin w/ American Wrestlers Thursday, May 14 The Luminary 9 p.m. | $12-$14 By Christian Schaeffer If you fell under the sway of the symphonic, cinematic pop of San Fermin's self-titled debut, you'll certainly find much to love on the octet's new LP, Jackrabbit. But rather than plot another suite of songs that take an intoxicating (if somewhat languorous) look at love and self-doubt, songwriter and composer Ellis Ludwig-Leone has turbo-charged his outfit, pumping synth, strings and skronky sax up front. Allen Tate still handles the male vocal parts with a fragile baritone, while newcomer Charlene Kaye displays a pop-star sheen on her songs.

Distant Worlds: music from FINAL FANTASY Friday, May 15, and Saturday, May 16 Powell Symphony Hall 7:30 p.m. | $40-$80 By Joseph Hess Conductor Arnie Roth first brought Distant Worlds to St. Louis in 2012. The two-day event featured selections from the legendary Final Fantasy video game series, along with performances from Japanese composer Nobuo Uematsu. (Here's an old concert review in which we humblebrag about our knowledge of the series to an excessive degree.) This weekend brings a different setlist than before, but expect cosplayers, avid fans and rare offerings like soundtrack CDs and DVDs at the merch table -- some of which are exclusive to the show. Uematsu won't be returning, but Final Fantasy XI composer Naoshi Mizuta will be in attendance with VIP tickets granting a once-in-a-lifetime meet-and-greet.

They Might Be Giants Saturday, May 16 The Pageant 9 p.m. | $25-$32 By Daniel Hill Stop what you are doing right now, pull out your phone and call the following number: 844-387-6962. Like what you hear? Welcome to They Might Be Giants' relaunched "Dial-A-Song" service, where each week you can listen to a brand new TMBG track. John Flansburgh and John Linnell first launched the quirky experiment in 1983, placing a mysterious ad in the back of New York's Village Voice and recording songs as the outgoing message of their home answering machine. The old number was active through 2006, pumping hundreds of free tunes into the ears of eager fans in an age before MP3 downloads ruled the industry. This January, the band revived the effort, and it remains just as silly and fun as ever.

Jenny Lewis w/ Nikki Lane Sunday, May 17 The Ready Room 8 p.m. | $22-$25 By Roy Kasten From a review from the RFT Music archives: She walked out in an ensemble that surely disappointed the overdressed shabby-chicsters that crushed onto the floor: jeans, T-shirt with sleeves rolled up and garlands in her red hair. "See Fernando" started the set with slicing lap steel from Farmer Dave, chunky rhythm guitar from Rice and utility percussion from Danielle Haim. Lewis' voice, supple and more muscular than usually recognized, was enough to fill up the room, but her band is more than just back up. They know how to move with her, whether on the fierce and funny "Charging Sky" or the omnichord-driven "You Are What You Love" (both from Rabbit Fur Coat); they know how to lift her as well.