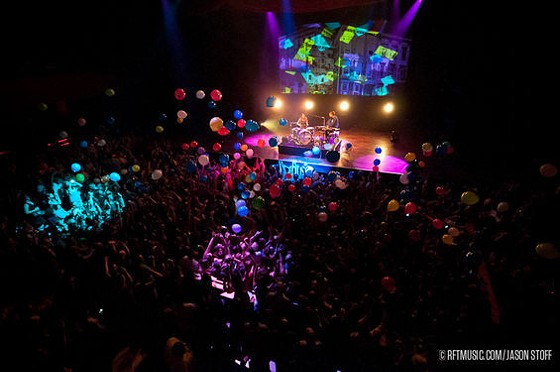 LouFest is approaching, but not before our own RFT Music Showcase, which takes place in the Grove on June 20. If the busy springtime has you reeling with festival fatigue, just remember that you never have to go far for the best acts in America. As you can see in our guide for the weekend ahead, they will come to you.

Bad Suns w/ Kiev, Talk in Tongues Friday, May 8 The Firebird 8 p.m. | $15 Bad Suns takes on post-punk with a sunny disposition. Sing-y songs come backed up by warmth synth sounds amid a strong and simple rhythms. Indie toe-tappers fill the Firebird from top to bottom.

Matt and Kim w/ Waters Friday, May 8 The Pageant 8 p.m. | $22/$25 Matt and Kim seem to be the cornerstone of lo-fi pop coming out of Brooklyn. In a decade's time, the duo has become the poster child for DIY ethics inside the genre of "indie" rock, which barely stands for "independent" anymore. Following its big blowout at last year's LouFest, Matt and Kim return to St. Louis at the Pageant -- a big-ticket venue, to say the least.

New Music Circle presents: Tim Berne's Snakeoil Friday, May 8 The Stage at KDHX 7:30 p.m. | $10-$20 Tim Berne's Snakeoil closes out the New Music Circle's 2014-2015 season with dark jazz, burnt to a crisp. The group propels loose compositions with searing dynamism. Horns swarm while woodwinds cut through under heady beats which add a certain density that ultimately sets the group apart. For every striking solo there's a bed of subtleties that fly by, likely under most radars.

Tony Lucca w/ Hey Monea!, Casey Buckley Friday, May 8 Old Rock House 8:30 p.m. | $15 Reality TV shows such as NBC's The Voice suggest that every contestant starts at zero and being on the telly is the best way to kick-start a long, successful career. That was hardly the case for Tony Lucca, but being the second runner-up on The Voice in 2012 certainly didn't hurt. He started young in the early '90s with The Mickey Mouse Club and has toured as backup for NSYNC, Maroon 5 and Marc Anthony, among many others. His 2015 release is aptly self-titled, showing new confidence after the last two years of extensive touring and recording.

Granger Smith (aka Earl Dibbles Jr.) w/ Bryson Jennings Saturday, May 9 The Ready Room 8 p.m. | $15-$20 By bringing a strong backbone to contemporary country, Granger Smith works around the glossy pop sound that tends to muck up modern singer-songwriters who only dabble in the genre. Clarity is key, and Smith sounds crystal clear but somehow never too clean -- it's just the right amount of grit for toe-tapping in the spirit of hearty folk rock.

Teenage Rehab w/ Guy Morgan, the Kuhlies, Powerline Sneakers, Dead to Begin With Saturday, May 9 Fubar 8 p.m. | $10 It's been a while since any member of Teenage Rehab has been, well, a teenager. Luckily, good hooks never get old, and this band has been doling out crunched guitars and sunny vibes with a classy take on good 'ol punk rawk for more than a decade. Break Yourself, released this past December, shows Teenage Rehab taking a lighter approach with tinges of reggae and ska popping up throughout the record.

Tom Russell Saturday, May 9 Off Broadway 8 p.m. | $28-$30 More than four decades after he began, Tom Russell keeps churning out the Texas-tinged folk rock, striking more notches on his belt with every great record. With the exception of 2010 and 2012, Russell has released some sort of album every year since 1999. Most living legends slow at least a little with old age, but apparently Russell never got the memo -- he's more prolific than ever.

The Yawpers w/ The Maness Brothers Saturday, May 9 The Demo 9 p.m. | $8-$10 This Yawpers video shows a hairy man with the stars & stripes 'round his neck, rollerskating with a cigarette in his mouth and two middle fingers in the air. The music fits the scene about as well as the dude looks in his short jorts.

Ed Sheeran Sunday, May 10 Scottrade Center 7:30 p.m. | $24-$263 At the ripe old age of 24, singer-songwriter Ed Sheeran has already done more in his life than most pop stars twice his age. In addition to touring with Taylor Swift, he has written songs for One Direction, as well as his own music, which gets more plays on Spotify than anyone else's. Kind of insane but understandable, because unlike most breakout acts in the last decade or so, Sheeran's work remains distinctly his own, without the hands of countless execs shuffling around behind the scenes. Not that Sheeran is completely old-fashioned -- his records bring a dense backline of beats and bass -- but the end result is a polished gem of pristine pop rock.

Tarpit w/ Buffalo MRI, Larva Lu, Janet Sunday, May 10 Foam 9 p.m. | $6 Tarpit is the rare act that sounds exactly like its namesake. No surprises, but knowing what to expect isn't such a bad thing. For one, you'll know to bring earplugs so Tarpit or tourmate Buffalo MRI don't murder your ears. Expect more easy-going, synth-laden sounds from local opener Larva Lu, but don't get too comfortable: Janet will harsh that mellow real quick with lingerie and a ladder. (Yes, she's the one crawling around on the ground in a cocoon in this video.)