London Quartet Wolf Alice Will Be Getting Your Attention 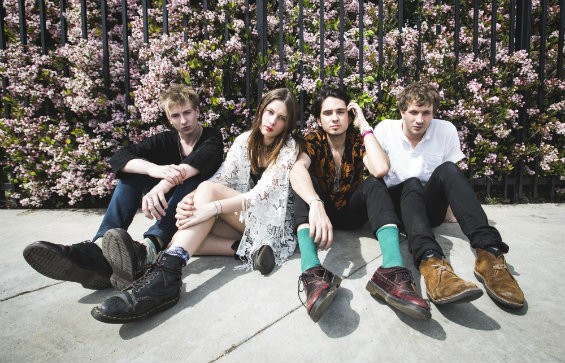 The first thing that may strike you about My Love Is Cool, the forthcoming debut album by North London quartet Wolf Alice, is how remarkably self-assured it is. Starting in 2010 as the duo of singer/guitarist Ellie Rowsell and guitarist Joff Oddie and growing from there, the band spent half a decade refining its sound. Wolf Alice released a series of EPs and spent a lot of time playing to empty rooms, all the while making its sound bigger and fuller.

With My Love Is Cool, Wolf Alice has drawn influences from myriad sources - The Breeders' loud/quiet dynamic and raw melodies, My Bloody Valentine's swirly, surreal tones and mellifluous vocals, Blur's observational songwriting, and the occasional Sonic Youth guitar break -- to create something definably its own.

After wowing South by Southwest earlier this year, Wolf Alice has hit the road for its second American tour. Drummer Joel Amey took time out of a rare day off in his hometown of Dorking to answer our questions. See the band at the Demo on May 3 and have a good time. Just don't ask Amey to accompany you to Cracker Barrel. Read our condensed interview for the reason why.

Riverfront Times: I know that Ellie and Joff started off as the original Wolf Alice members. When did you and bassist Theo Ellis join, and what did you add?

It was through a mutual friend. I'd actually seen [Ellie and Joff] play a show with two other members in Kilburn. I knew they wanted to branch out. I'd never actually played the drums before, but they asked anyway. Theo joined a couple months later.

I didn't even have a drum kit at the time, just these electronic pads. I'm not sure how I was able to pick it up, as I'm the world's worst footballer and skateboarder. But I can kind of do drums, weirdly.

The songs are credited to all four members. How does the songwriting process work?

All four of us were songwriters in our bedrooms before we were together. Even if I'm the drummer, you don't stop having that mentality; you'll pick up a guitar at some point and try to write a song, too. Other times, Ellie or Josh will have a specific idea and we'll all bat it around. Everyone has strong ideas all the time for hooks, drums and guitars. It's quite unusual, but it really is between the four of us.

With something like "Fluffy," where it starts out quiet and then erupts into the loud chorus, is that an example of something you'd develop in practice?

That was actually the first song we made together. It was made with intent. We decided: "This is the time where we're gonna get everyone's attention." Because at the time, we were playing to three or four people in London at any gig, or people would be standing at the bar, not listening. We wanted to make them listen somehow, turn it up to stupid levels of loud. I just thought of the most obnoxious drumbeat I could play and went, bash! bash! bash! the entire way through. I remember thinking, "Oh, yeah. This is where we want to be taking things." It was just more visceral and quite angry. We love that song so much. We were never totally happy with the recording, but it was a lovely snapshot of where we were at the time. But the re-record on the album is amped up even more. A lot of teenage frustration.

I liked the keyboards that come in halfway through the first verse - it feels like an extra hook.

That's actually Joff's guitar. Joff has a pedal board the size of most people's cars. I don't think I've ever really heard him play regular chords; he's always doing some sort of electronic, panning, modulated freakout. I think for that song it was a loose pedal that he was able to make phase out. His playing reminds of Graham Coxon from Blur, who uses his guitar in a shape-shifting way.

You mentioned grabbing people's attention, but there's also a song like "Giant Peach," which obviously references a child's book. Some of the lyrics seem to reference childhood memories and people who aren't there. So there's a tender side.

That's very much Ellie's corner. In terms of the sound, I think we're interested in how something can sound incredibly heavy but light at the same time. You don't have to turn your distortion up to shrill levels to make something heavy. An acoustic guitar can be incredibly heavy when played the right way. A song like the Beatles' "Happiness Is A Warm Gun" is one of the heaviest tunes I've ever heard, even though it's just voice and guitar. At the same time, there is a lot of light in our sound, and we'll want to push it to be as beautiful, happy or sad as possible. The more extreme, the more rewarding it is, especially when you go play it for eighteen months in a row. It's never gonna be blasé.

How is that sound progressing? Are you working on new stuff?

We actually started writing a lot of new material before we went in to record this album. I don't know what's going to happen to those. We always have our laptops and acoustic guitars with us. We're never like, "Let's sit down and write a song today." We're always noodling, coming up with bits and bobs.

You mentioned earlier playing to three or four people. You're now playing big shows in Europe. What's is like to come back to the smaller level when you play the States?

We really like playing in small, sweaty rooms. It's amazing to play bigger venues, but it's a different beast. We started and love playing in rooms when you're on the same level as the audience and where everyone's going mad. If anything, it rekindles our love with music and what we did early on.

I couldn't help but notice the picture on your website at In-N-Out Burger. Any other regional foods you like or are determined to try on this tour?

OK, dude, I can tell you what I didn't like. I can eat a lot of junk food. I can go to McDonald's any time. But there was one place I never want to go back to again: Cracker Barrel. I think Theo, the bassist, wanted to go. He only ever wants to order food that will make people laugh rather than what he actually likes. He had chicken-fried steak and Coca-Cola cake there. And the cake stank as if we'd literally poured Coca-Cola over it at the table, it was that strong. I appreciate any food, but I'd be happy never to go to Cracker Barrel again.

Check out a preview of Wolf Alice's "Bros":