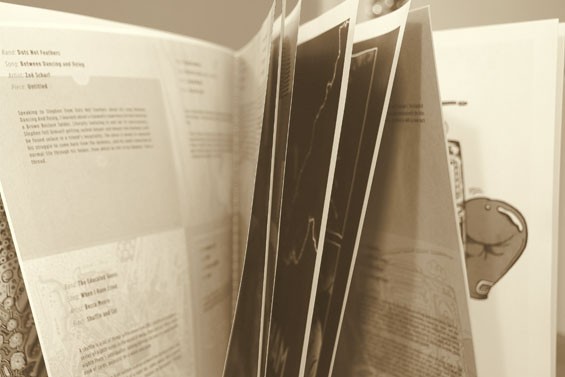 If the eyes are truly the windows to the soul, Chuck Crittenden's betray the passion behind his normally stoic nature.

"I don't usually show a lot of emotion," Crittenden says, his blue eyes pulsating with energy, "but I'm really excited."

His enthusiasm is well-justified. After sixteen months of persevering through a multitude of roadblocks, Last in the American League — a compilation of local music and visual art Crittenden curated — is finally being released. A party, celebrating both the project and the artists who contributed, will be held this Saturday, May 2, at the Ready Room.

The idea for Last in the American League began germinating in Crittenden's head in late 2013. A musician himself and friend to some local visual artists, he imagined a combination of the two mediums in album and book form. The songs would inform the art and vice versa, providing a historical record. Experiencing artwork simultaneously with music is an experience Crittenden says he has always treasured.

"There's something really special about staring at the art while you listen to [music]," he says. "You really can get lost in it. You can find a connection between the two."

At a crowd-sourcing event in early 2014, Crittenden met Leetah Nickel, who would sign on as his marketing partner. Determining that the project would require $6,000 to be fully funded, the pair turned to Kickstarter, a crowd-funding website that allows supporters to pledge money in exchange for perks. If the goal is not met, however, no money is taken from donors, and those in charge of the project receive nothing.

Though Last in the American League received around $4,000 in promised donations, it still fell $2,000 short of its goal — netting the duo zero actual dollars.

"It was disappointing," Nickel says, "but it still did the job of raising awareness about the project."

Crittenden, faced with what may have been an idea-killing defeat for some, refused to let the Kickstarter experience deter him.

"It was frustrating for it to not go through," he says, "but at the same time it's one of those things where you can't sit and sulk. You have to get up; you have to be ready to move on. You have to have a Plan B."

For Crittenden, "Plan B" was to pay for the compilation mostly out of his own pocket. Though that's a hefty sum, it pales in comparison to the project's other major investment: the time and stress that comes with organizing 36 different artistic entities.

"Getting five people to respond to an email is a pain in the ass," Crittenden says. "Getting 36 people — eighteen of which are groups — to respond to something..." He trails off.

"The fact that we've gotten to this point, I wonder: How?"

The answer is the passion with which he promotes and defends local art.

"Go to another city and say you're a band from St. Louis, and people are like, 'Do you know Nelly?' And I want St. Louis to get past that," he says. "I want other people to realize that St. Louis is bursting at the seams with so much passion and talent."

Some of that talent resides in Nickel. She's not only his marketing partner, but also a contributing artist. She created a mixed-media piece on canvas in collaboration with Stan Chisholm (better known to local music fans as 18andCounting).

"It was amazing to work with Stan," Nickel says. "I took a lot from the track I was provided, and we discussed initially what we both wanted. I would give him updates on the piece as we went and make adjustments."

Charlie Brumley, songwriter and band leader for the Educated Guess, had a similarly positive experience working with artist Becca Moore on "When I Have Cried." The song, which is on the band's self-titled album, was in its mixing stage when Moore was brought on board to prepare it for Last in the American League. Brumley says the collaboration couldn't have gone smoother.

"She sent us a few graphics she'd done, all of which were amazing, and we went with the one that resonated most," Brumley recalls. "She does great work and I'm really thrilled to have been a part of it."

Having just released his own record last week, Brumley recognizes the amount of effort it took for Crittenden and Nickel to see their project to completion. "[Chuck] and Leetah have been working incredibly hard and certainly pulled off an ambitious undertaking," he says. "It's hard enough making a record with one band, let alone coordinating with ten."

Now is the time for Crittenden and Nickel to celebrate the fruits of their labor, but the show also carries with it a hint of bitterness. Two of the bands performing Saturday night — Volcanoes and Via Dove — are breaking up soon. In fact, ten of the album's eighteen bands have either broken up already or have announced they'll do so in the near future.

"Someone commented today, 'You're the band angel of death,'" Crittenden says. But, he adds, the ongoing cycle of bands forming in this town, gaining recognition and then going separate ways up also accounts for one of the reasons he's most proud of Last in the American League.

"This really is a time capsule of sorts of what the music was like in 2014," he says.

While the project serves as a piece of history, it also takes its name from history.

In the 1890s, when the baseball team was known as the St. Louis Browns, it was said that the city was "First in booze, first in shoes, last in the American League." Crittenden took the phrase, put his own positive spin on it and shot it back at those who overlook the city.

"It's a reference to St. Louis," he acknowledges, "but at the same time, it's a tongue-in-cheek way of flipping off everybody that says St. Louis isn't worth a shit."