Pokey LaFarge on His Rounder Records Debut, Something in the Water 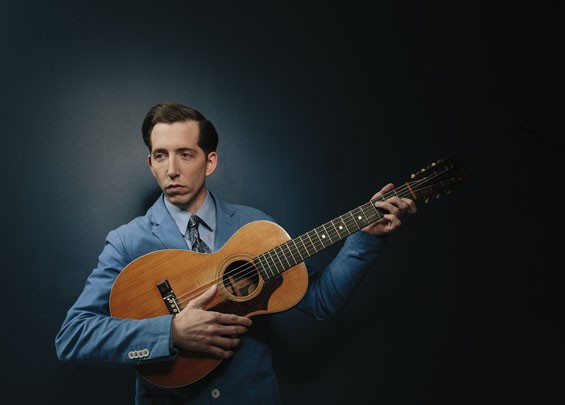 The last time RFT Music caught up with Pokey LaFarge, the year was 2010 and the St. Louis songwriter was fresh off the release of his third album, Riverboat Soul, released by Free Dirt Records. "I'm pretty happy with it," LaFarge said of the record at that time. But, he confided, "It will probably be a couple more years before I get the sound that I want, and that will be with a bigger ensemble."

Fast-forward to now: A half-decade, three studio albums and as many record labels later, and it seems that he may have finally realized that vision. His Rounder Records debut, Something in the Water, was released April 7, and sees LaFarge and his long-time companions the South City Three joined by some recent additions to the band -- clarinetist Chloe Feoranzo, trumpeter/trombonist TJ Muller, and drummer Matt Meyer -- as well as a handful of members from fellow Midwestern roots acts the Fat Babies, the Western Elstons, the Modern Sounds and NRBQ.

LaFarge will be returning to St. Louis later this month for a three-night stint at Off Broadway -- April 24 with the Loot Rock Gang, April 25 with Jack Grelle and April 26 with Margo and the Pricetags, as well as a pair of in-store appearances at Euclid Records and Vintage Vinyl. In anticipation of the homecoming, we caught up with a groggy LaFarge after a late night in Melbourne, Australia, to discuss the expanded lineup, his feelings about the new album and his misgivings about the lack of Ferguson-related material on Something in the Water.

"It's definitely been a natural progression," LaFarge says of the group's growth. His move from performing solo to playing with the South City Three to touring with his now seven-piece band may have been natural, but that doesn't mean it was effortless. "Some of that was finding the right people," LaFarge says. "That can be a challenge, unfortunately -- finding the right people to play for you. Especially drummers. Finding good drummers that can play my style of music -- people that I want to evolve with -- was very difficult."

He pauses. "But also it's a financial thing, you know? Being able to afford a seven-piece band -- it's not cheap, man."

Despite the practical concerns that arise when touring and recording with a larger band, LaFarge makes clear that it is the music itself that ultimately guides his personnel choices. "I've got to the point where you kind of have to let the records tell you what to do with the instrumentation and stuff like that," he says. "Basically, I wanted to have a lot more drums, I wanted to have a lot more harmonies for this record. Having a good groove, having good harmonies on top to accentuate my singing style, we thought would be a nice way to go forward with the record."

The resulting album is LaFarge's most contemporary-sounding one to date, both in terms of its slick, eminently digestible production (thanks to renowned producer Jimmy Sutton) and LaFarge's uniquely postmodern eclecticism. Something in the Water blends a carefully curated handful of nostalgia-inducing early- and mid-twentieth-century American styles to create an album that comes across as simultaneously familiar and fresh. "Underground" juxtaposes swinging jungle beats a la Cab Calloway and the Missourians against Bo Diddley-esque distorted electric guitar and ragtime-y rhythm banjo. In the wistful waltz "Goodbye, Barcelona," snappy castanets contrast a twangy country guitar, doubling the bass line. On "Bad Girl," archtop guitar and pedal-steel harmonies hearken to the Western swing of Bob Wills and His Texas Playboys, while LaFarge's vaudevillian vocals sound something akin to a younger, rowdier Al Jolson, both in their boisterous volume and fast, wide vibrato.

Looking back on his discography, LaFarge concludes, "This is an album I think I'm finally proud of."

Despite the pride LaFarge takes in Something in the Water, he does express some ambivalence about the lyrical material that didn't make it onto the album.

"Most of this last record was done and recorded right around the time of the events in Ferguson. I wasn't able to include anything on that. I felt pretty irresponsible for not doing that. I felt like I needed to speak up and say something, to just let people know that I was there for them, for the city," he says heavily. "It still has to be a good song. I'm not a preacher, I'm a songwriter. I have had issues in the past with making a very serious subject come across in a groovy tune."

Casting an eye to the future, LaFarge says, "I think that I've broken through in some respects. I look forward to the next record. I wouldn't be surprised if you started seeing things from more of a social commentary aspect, things that might be..." He pauses and exhales heavily. "Um...more controversial."