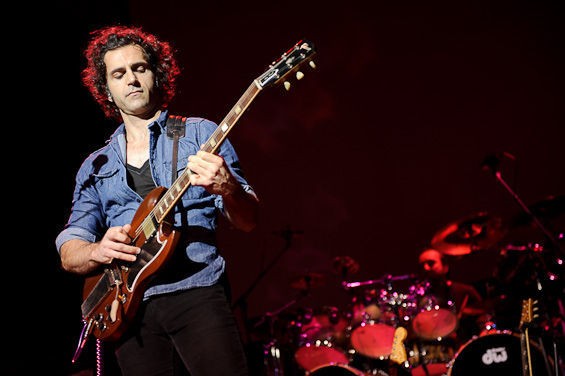 Insert 4:20 joke here. I'll help you out: Tumblr is an endless sewer of hash-hashtags and humorless stoner gifs. Those who choose to abstain on such a national holiday might find solace in the sonic equivalent of flying high as a kite.

Zappa Plays Zappa is such a band. Weed stench is sure to permeate every inch of the Ready Room, so if your office requires randomized drug tests, you could be in danger from second-hand smoke alone. Hoodie Allen plays Maryville University the next day, which might not be much safer. It's best just to give up and go green.

Here is our list of the week's best live music.

Zappa Plays Zappa Monday, April 20 The Ready Room 8 p.m. | $25-$75 By Joseph Hess Calling Zappa Plays Zappa a tribute group discredits the fact that Dweezil, the legend's eldest son, commits to the pageantry of a classic Zappa gig -- and then some. This group plays more like a sequel with the same cast but a new director. Respect to the source is a given, especially since the players here go beyond knowing just how to play -- they know why. Oh, and it's 4/20 today, so.

Hoodie Allen Tuesday, April 21 Maryville University 8 p.m. | $20 By Joseph Hess Hoodie Allen is a late '80s baby who swims in the stranger subgenres of hip-hop. He dabbles in the pop side (see the video above, a collab with singer/songwriter Ed Sheeran) but embraces the underlying fuzz of lo-fi beats. His bouncy sound invokes a party-rap vibe that revels in playful lyrics that never get too serious -- think slice of life with sarcastic cheese. This is an odd gig for Maryville, but Hoodie might be best taken in with a space full of drunken students stressed before the impending doom of finals week.

Pujol Wednesday, April 22 Off Broadway 9 p.m. | free By Kiernan Maletsky From the RFT Music archives: Daniel Pujol from Nashville knows plenty about the good in people and the celebration of life's pleasures. He is, like much of his young generation, highly educated and disillusioned with the straight-and-narrow path to the white-picket fence in the 'burbs. Maybe that all worked out for a while, but it's hard to imagine the trajectory that gets us from debt and anxiety-laden kids to stable country-club members.

Robert Glasper Experiment w/ Keyon Harrold Thursday, April 23 (also Wednesday, April 22) Jazz at the Bistro 7:30 p.m. | $35 By Charles Purnell To say that Houston jazz pianist Robert Glasper has had an amazing run over the last the six years is an understatement. The Blue Note Records signee has become one of the new leaders in jazz music, not only through his prodigious chops but also through his ability to effortlessly blend in with hip-hop, pop and rock, creating a seamless sound. In 2012 his quartet released Black Radio, which brought the group widespread critical acclaim and a Grammy to boot. The sequel, Black Radio 2, upped the ante and solidified Glasper's role as a must-watch modern jazz artist. Glasper is one of the many artists featured on Kendrick Lamar's masterpiece To Pimp a Butterfly, released earlier this year -- he went to high school with saxophonist and TPAB producer Terrace Martin.

Follow through for more concerts in St. Louis this weekend. FRIDAY, APRIL 24

Sleater-Kinney w/ THEEsatisfaction Friday, April 24 The Pageant 8 p.m. | $25-$30 By Christian Schaeffer In its later '90s/early '00s heyday, Sleater-Kinney was simultaneously a world-eater and a universe-creator; the trio of Corin Tucker, Janet Weiss and Carrie Brownstein made sure to build up as much as they burned down. Rock prowess, righteous fury and soul-deep lyricism rarely melded so well, and the band's widespread influence -- as well its multiple offshoots -- ensured that the band's signature sound was never truly dormant. And yet the near-rapture that accompanied the band's reemergence this winter, with a taut new album and generous tour, suggests that S-K fans were ever-ready for the band to reclaim its benevolent reign. Seattle hip-hop duo THEESatisfaction, made up of Stasia Irons and Catherine Harris-White, will open the show.

Juicy J Sunday, April 26 Pop's Nightclub 7 p.m. | $35-$40 By Daniel Hill Since moving away from his musical foundations in the Three 6 Mafia to pursue a solo career, Memphis rapper Juicy J has found considerable success. From joining Wiz Khalifa's Taylor Gang crew to signing a solo deal with Columbia Records to his feature on Katy Perry's huge "Dark Horse" single in 2013, J has been consistently proving that his Hustle Till I Die mentality is one that pays off. And his upcoming album, Pure THC: The Hustle Continues, is said to include the likes of Mike Will Made It, Dr. Dre and Timbaland as producers, meaning it can reasonably be expected to make a big splash when it drops as well. In this case, album titles are not just clever names. Da Mafia 6ix -- DJ Paul's new name for what remains of the Three 6 Mafia -- will be performing in St. Louis at the Mad Magician the night prior to this show. J does not have a show booked on his tour for that night, and Da Mafia 6ix does not have a show on the night of J's performance, either. Let's all start getting our hopes unreasonably high now.