Don't Like Lightning Bolt's Sharp New Sound? Brian Chippendale Is OK with That 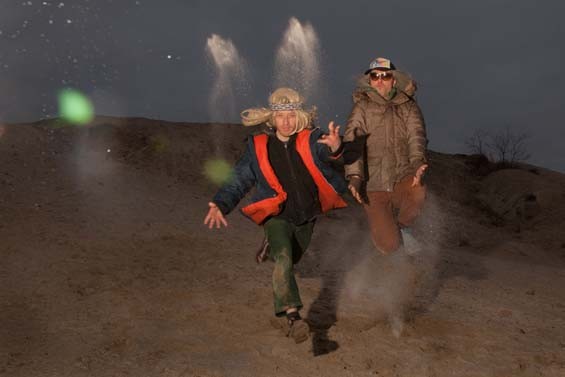 Brian Chippendale, one-half of the two-man noise band Lightning Bolt, is on the campus of the Rhode Island School of Design in his hometown of Providence, supporting the school technicians who are striking for better benefits, when someone recognizes him. They exchange a brief "hey!"

It's not a rock star move. Chippendale may be in a band that was previously No. 8 on the Metacritic "Artists of the Decade 2000-2009" list, but today he's getting more recognition for supporting the cause (his wife is a RISD grad student) and for wearing a headband than for his music. You can be a big man in the world of experimental noise rock. You can even perform with Bjork. That doesn't mean people outside the scene will ever recognize you on the street -- especially if your role involves playing the drums in a knit face mask, which also holds the tinny compact microphone that you sing/shout into.

Chippendale and his bandmate Brian Gibson formed Lightning Bolt as RISD students two decades ago. The duo specializes in riff-heavy ear-bleeding tunes that are equal parts math-rock precision and heavy metal demolition. Forged by Chippendale's frantic abstract drums and chanting ranting combined with the bloody high-pitched bluster of Gibson's bass, Lightning Bolt hurl out full-throated anthems meant to be played fast, loud and in your face. Which they often are, since the pair often performs on the floor, with the crowd surrounding them, rather than onstage.

You might expect shows to dissolve into fistfights, but Chippendale credits Lightning Bolt's audience with behaving, even at a super-intimate range. "We get some butts now and then, but our core audience has been art school nerds into aggressive music. We bring in an arty crowd, but even so, sometimes there is a cross-over [between metalheads and our people] and things get a little intense. Thankfully, no major outbreaks."

Oddly enough, the only casualties at Lightning Bolt shows tend to be the equipment. Chippendale's drums have born the worst as sometimes people hit the drums with their foreheads. "Somehow," he quips, "the IQ level of our fans is high enough" that they don't actually break the equipment. He adds, "It's all them, I'm a fool."

Fool or no, Chippendale is with Gibson in Providence for a few more days before they embark on their latest short tour of the U.S., which includes a stop at the Luminary on April 21 -- followed by some dates in Europe. They'll use that time to rehearse, see family and friends, and prepare for a hard few months. "We're not a raging tour band," Chippendale says, "We do fairly well if we're working a lot."

As for that work, Chippendale says he "gets by" doing freelance work, mostly art and illustrations -- including the album art for their new release, Fantasy Empire -- while his bandmate Gibson co-founded and works for video game company Drool. Drool's first game, "Thumper," is a hallucinatory mashup of trippy shooter REZ and racing game F-ZERO. It's described in press releases as a "violent rhythm game" -- which could also be a shorthand for the hypnotic grind of Lightning Bolt's output.

That output has slowed of late: The pair haven't put out a record since 2009's Earthly Delights. But Chippendale has kept busy recording and touring as Black Pus.

This, too, is not the rock star life. "I had found some van for like 500 bucks, fixed it for another 500 and then drove to Buffalo," he recalls. "And the serpentine belt must have rubbed against an engine part and just melted. It was Saturday night, meaning Sunday morning, first day of the tour, I was broke... Luckily I found a guy to fix it, some Dodge tech that I met through a Twitter connection. There we were in his backyard on a Sunday in Buffalo... I managed to get through it."

Getting through it is a recurring theme this year. The recording process for Lightning Bolt's new album was set back a few times for various reasons.

"There were some false starts with the record," Chippendale admits, "a bunch of recordings just didn't work out. We're recording in a studio that's new to us with a new engineer... You know how you don't always know what you want, but you know when you're not feeling it?"

But the pair emerged on the other side with a clutch of noisy raw tunes that still sound far more polished than their body of work to date -- a side effect of their new recording arrangement. Their previous efforts were noise-ridden straight-to-tape and utterly DIY. "We'd never worked in digital editing before," Chippendale says. "Or with Pro Tools. This was all new. It really opened up the sound."

Fantasy Empire drags a once bleeding-ear dissonant band into more clear-headed territory, a clarity enabled by the new recording setup. Now astute listeners can hear the frantic interaction between two players at the top of their musical game. As you'd expect from its title, Fantasy Empire is heavy in fairy tale mythology, including a sprawling finale track, "Snow White and the 7 Dwarves Fans," whose title includes a gentle nudge at Chicago punk godfathers The Dwarves. ("You gotta shout out to them." Chippendale says with a laugh.) But while it is a great gateway into Lightning Bolt's blistering style, it certainly doesn't sound like the rest of their albums.

That might turn off the diehards, but that's OK.

"It's good to hit people with something new," Chippendale says. "Keep them on their toes and keep us engaged." And then there's a pause. "I hope the van works."

Lightning Bolt plays the Luminary on April 21, with Complainer (formerly Spelling Bee) and Hardbody. Doors open at 8 p.m., show at 9 p.m. Tickets $12 in advance and $14 day of show. See theluminaryarts.com/ for ticket info.