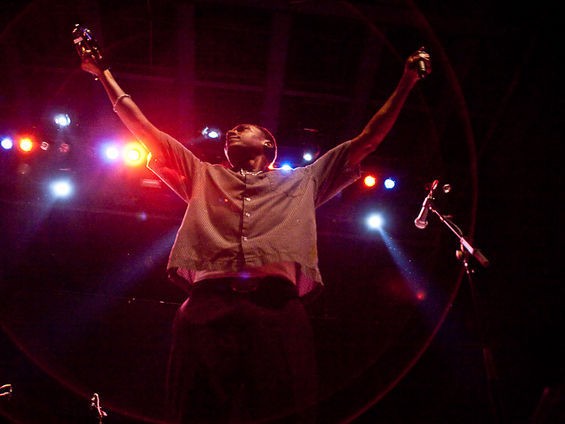 The English Beat is back, so tighten those suspenders and checkerboard-whatevers and get to skankin'. (That was really the best term we could come up with for the half-dance, half-mosh?)

Also, the prince of swoony pop-rock himself Bryan Adams returns to town this hump day with his Reckless Anniversary Tour. Intrepid writer/comedian Jeremy Essig recently broke down the seminal album track-by-track, calling it the "...one album to have on a deserted island if you happen to fall in love and break up with someone on that island (while also cheating with a third person on said island)." Whether you have a plus-one or you're going solo this week, there's great music to be heard in St. Louis every single night.

Cobalt Cranes w/ Babe Lords, Brandon Creath, Loafergang Hippies Monday, April 13 Foam Coffee & Beer 10 p.m. | free By Joseph Hess LA's Lolipop Records has a haughty mission statement: To show the world that rock & roll isn't dead. And while that may seem condescending to self-professed rockers the world over, let's face it -- if labels like Lolipop weren't breaking ground by backing new bands like Cobalt Cranes, the genre would all but croak. While Cobalt Cranes sticks to conventions, it brings a fresh brevity absent from its long-winded brothers. Psychedelics tinge the whole affair without distracting from the simple, bloodletting riffs that fire off at half-time under solid, unfussy drumming. The band's latest, Days In The Sun, was released this past December and can be heard in its entirely on bandcamp.

The Delta Saints w/ Lionize, Meghann Wright, The Green Gallows Tuesday, April 14 The Firebird 7:30 p.m. | $12.50-$17 By Joseph Hess Make no mistake, the Delta Saints are Nashville to the core, but the band trades in tradition for a fresh pair of ears raised on the big blues, country and funk of recent years. The drums hit the sweet spot between bebop and big band, breaking the beat under a crooner's dream of swingy sing-alongs. Few bands bridge the gap like the Delta Saints, who sound like a blues crew from the future, back in time to show us the path where pop music pays real tribute to the songs of yesteryear.

Bryan Adams Wednesday, April 15 The Fox Theatre 8 p.m. | $35-$125 By Allison Babka Let's get this out of the way right now: There's a large percentage of St. Louis women whose idea of the perfect musician boyfriend was solidified right around the time Bryan Adams released Reckless in 1984. Sure, Cuts Like a Knife earned him plenty of fans, but when young ladies heard the Canadian singer's recording of "Heaven" during their first middle-school dance, or came across "Summer of '69" on MTV a year later, their hormones went into overdrive. And why wouldn't they? Adams was -- and still is -- a kind-eyed, spiky-haired guitarist who sings about romance and fun times. He's the Mom-approved Peter Pan of rock, and when he punctuates nearly every verse with an enthusiastic "YEEEEEAH!" we know it comes straight from the heart. Adams is no one-trick pony. In addition to being an album workhorse and soundtrack king, he is a well-regarded professional photographer who has shot for Esquire, British Vogue and Guess Jeans.

Chuck Prophet and the Mission Express w/ the Incurables Thursday, April 16 Off Broadway 9 p.m. | $15 By Roy Kasten It's become a spring tradition, these appearances by one of the great if under-recognized rock & rollers in American music. Chuck Prophet's warm-weather return to St. Louis affords anyone who wants the thrill of a tight and daring band and the wit and wonder of a prolific songwriter (last year Prophet released his thirteenth album, Night Surfer) a chance to mainline it all like the junk the rocker kicked years ago. Onstage, Prophet and the Mission Express put the bomp in the shooby dooby, the wang in the shama lama and the fear into any who would dare follow them onstage.

Follow through for the best concerts in St. Louis this weekend. FRIDAY, APRIL 17

The English Beat Friday, April 17 Blueberry Hill 8 p.m. | $27.50 By Jenn DeRose "Classic ska album" is a phrase rarely, if ever, uttered aloud by your average music enthusiast -- the eye-rolling and groans it would certainly elicit are completely justified. That said, there are gems that transcend the genre bias typically associated with ska and its affiliates: the Specials' self-titled album from 1979, for example, and pretty much everything released during the first wave of Jamaican ska in the 1960s. The English Beat's I Just Can't Stop It, released nearly 35 years ago, fits into this elite category of timeless albums -- a two-tone masterpiece with elements of Motown, post-punk, new wave and dub. Dancing is compulsory; skanking is optional.

Saul Williams w/ Sons of an Illustrious Father Saturday, April 18 Blueberry Hill 9 p.m. | $20 By Tara Mahadevan Saul Williams is not only an emcee but a poet, even appearing on HBO's Def Poetry Jam. He's collaborated with artists and rappers including Nas, the Fugees, Erykah Badu, KRS-One and De La Soul, and even with the poet Allen Ginsberg. Williams' career is well-rounded, proving that there is indeed a connection between hip-hop and poetry -- as if there was ever any doubt.

Endora w/ Middle Class Fashion, Kristeen Young Sunday, April 19 The Demo 7:30 p.m. | $10-$12 By Bob McMahon Ellen no longer "the Felon" Cook has always had musical ambition that outpaced her minimal instrumentation. Cook's labyrinthine arrangements are still matched by drummer Matthew Reyland's Guitar Center drum-off winning chops, but the two are now joined by guitarist Pete Moss and cellist Jake Brookman under the new band name "Endora." Cook says that this lineup, which made its debut March 21 at the Tap Room, will eventually expand alongside her growing keyboard collection. She will put these new synths to use to play what she calls "Stabbaret rock" that will amp up the theatrics and place more emphasis on the group's balladry while eschewing a cheesy stage show. Expect lots of new material as well as old favorites cast in a new light. Also playing are former St. Louisan Kristeen Young and STL favorite Middle Class Fashion. Arrive on time and stay late.