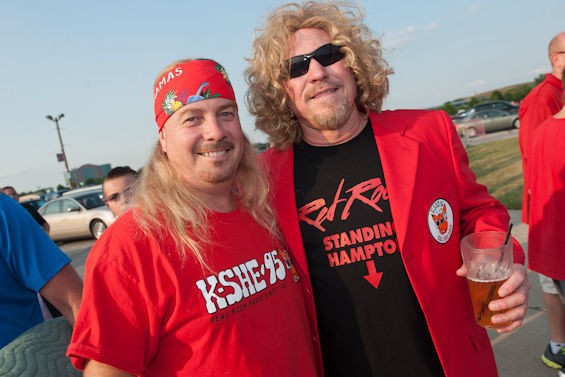 St. Louis-based fans of inferior Van Halen products and the longest wavelength in the color spectrum will be delighted to learn that, starting this Sunday, Sammy Hagar will be hosting a weekly radio show on KSHE (94.7 FM). The Red Rocker's program will air from 4 to 6 p.m. each Sunday.

See also: The Red Rockers of the Sammy Hagar Show

The move comes as part of a syndication deal with Envisage Radio Group, home to Rock All Night with hosts Scorch, Mikey and Russ, and NugLife Radio, a marijuana-centric show hosted by a Nevada man named "Medicinal" Michael Boris. (Neither of those programs will air in St. Louis, though. We just wanted to mention them because the details crack us up.)

Hagar signed with Envisage in late January -- his program is called Sammy Hagar's Top Rock Countdown and is described on its website as "a two-hour weekly show where Sammy counts down anything he wants. One week might be his favorite party songs, the next his favorite band NOT in the Rock & Roll Hall of Fame or the best songs from a year or decade. The music is safe for Classic and Mainstream Rock formats."

How anyone could think the airwaves would possibly be safe when the King of Cabo is rocking at maximum party potential is anyone's guess, but regardless, Hagar is excited for the opportunity.

"With my own radio show, I'm going to do for radio what I did for Cabo: create something that promises more fun than the average adult should be allowed to have," Hagar said in a press release. "Drinking tunes, songs for sex and fast cars -- Top Rock Countdown will be my life in music. After more than 40 years in rock & roll, I've got a lot of knowledge, a lot of love and always a lot to say, so this is going to be a blast."

KSHE's staff is excited for the program as well.

"Sammy Hagar and KSHE radio are synonymous with rock in St. Louis. It's only fitting that Sammy have his own show," assistant program director and afternoon drive host Favazz tells RFT Music. "KSHE and Sammy have a 40-plus year relationship, and that's why Sammy continues to be huge in St. Louis to this day. It wasn't too difficult of a decision."

As for content, Favazz says it will feature classic rock in a similar vein to what KSHE listeners have come to expect, but will likely include some songs that are not currently in the station's rotation as well.

"Truly, it's whatever Sammy wants to play," he says.

Check out a teaser for the show below, then start stocking up on tequila and prepare an excuse for your boss now. If everything goes according to Hagar's plans, you will be feeling far too hungover for work on Monday.