The St. Louis music community is mourning the loss of Anne Tkach, a beloved bassist and vocalist who played with many folk and rock bands. Tkach died in an early-morning house fire today in her father's house in Webster Groves; her father, Peter Tkach, survived the blaze. She was 48.

By day, Tkach was a manager at the Tower Grove South market Local Harvest Grocery, but after hours she could be found playing in a host of bands: in the rootsy quintet Rough Shop, where her plaintive voice and occasional turns on the upright bass were a highlight; performing backing vocals and percussion in the soul-fired combo Ransom Note; or laying down fervent bass lines in the fire-breathing Magic City. Few musicians in town had her reach, or energy, or comfort jumping in and out of genres. 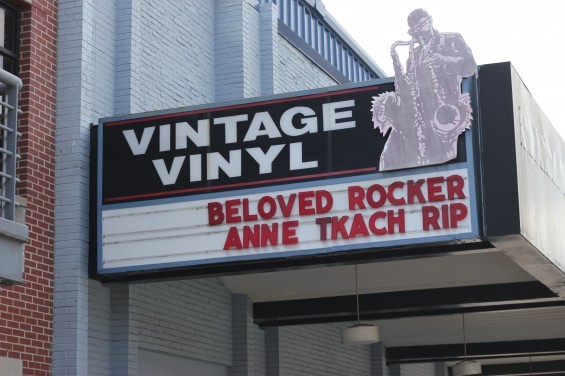 Tkach first came to national (and international) prominence as a member of the New Mexico-based alt-country band Hazeldine, a group that appeared on a few Bloodshot Records compilations but found more receptive audiences in Europe. In the past few years Tkach lent her talents to the Skekses, Bad Folk and, most notably for early-aughts fans of local rock & roll, as a member of the beloved Nadine, which was set to play a much-anticipated reunion show at the June's Twangfest concert series.

Her musical resume is certainly a testament to her skill and intuition, but her spirit -- warm, funny, uncompromising -- drew other musicians to her. When I interviewed the members of Rough Shop this past winter in advance of the band's annual Christmas concert, it was Tkach -- the one member openly, smilingly ambivalent about seasonal music -- who summarized the true spirit of the project and the musical bond that band had created.

"Is it Rudolph the Red-Nosed Reindeer where that's the Christmas special where they go to the land of misfit toys?" Tkach asked. "I kind of feel that way about this group of people...I always feel like I'm in the land of the misfit toys at Rough Shop Christmas. It's what we create together -- we're not doing it because somebody's telling us to do it, or because of the commercialism is out there -- we're doing it because we need family during Christmas too, and this is how we create that."

Anne Tkach was family to many -- her bandmates, local showgoers, the customers at Local Harvest. To say that she'll be missed feels like a massive understatement.

Lightning is being investigated as a possible cause after this morning's early morning thunderstorms, but the fire chief told the Post-Dispatch that other possible causes are being considered as well.