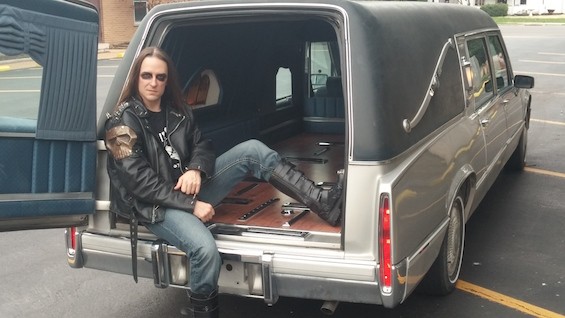 In its continuing quest to emulate its horror-punk heroes the Misfits, the Gateway City's own We Bite acquired a hearse this week to cart gear from show to show. That's right: Instead of transporting dead bodies to the graveyard, this former funeral carriage is transporting music lovers to heaven.

Or to hell, as the Misfits tribute act would probably prefer.

"It shows that if nothing else, we are authentically fans ourselves of the Misfits, horror punk and all things ghoulish, and that we have that same interest in seeing these things presented in the exciting and powerful way they deserve," says We Bite bassist Nikki Strychnine, who performs under the stage name Nikki Only -- a tribute to the Misfits' Jerry Only.

Initially, Strychnine didn't intend to buy such a creepy vehicle; he simply was in the market for an everyday car. But that changed quickly once We Bite vocalist Rob Austin [stage name Rob Whitman] jokingly mentioned seeing an ad for a hearse.

"I was immediately enthralled by the idea and began excitedly discussing the perks of how it could carry all our stage setup and gear, how it would totally work as a touring vehicle and all the ways we could modify it to our look," Strychnine tells RFT Music. "After just a bit of conversation, I was intractably in love with the idea.

"I'm a fairly unusual person, so I was easy to sell on the idea of driving a hearse," Strychnine admits.

The spooktacular vehicle is a grey 1990 Cadillac de Ville -- "Devil," Strychnine calls it -- made by S&S Coach Company, which was founded in 1876 and was one of the nation's leaders in funeral-coach craftsmanship. Strychnine -- who loves the lantern-shaped lights known as "opera lights" on the side of the car -- says that the hearse has held up well, built solidly with only a bit of wear on the blue interior.

"It just lends it more of a lived-in feel. Well, not 'lived-in' -- I guess 'died-in' feel," Strychnine jokes. "There also are some amazing wood carved reliefs of vaulted arches in the casket area that give it a very creepy feel and really bring the purpose of the vehicle home."

The hearse, which We Bite will take to Springfield for its show at the Carnival of Ink festival on April 25, has plenty of room for the band's four members, their equipment and their array of Misfits-style makeup and costumes. There's more to marvel at inside, including the rows of rollers in the casket area that aid in the loading and unloading of heavy objects -- living, dead or undead. There's also a Plexiglas window that separates the cab from the rear area, plus one questionable detail.

"Maybe most unsettling is the 'emergency door release' knob located on the inside of the back door -- the coffin door," Strychnine says. "You know, in case someone is mistakenly locked in the back." 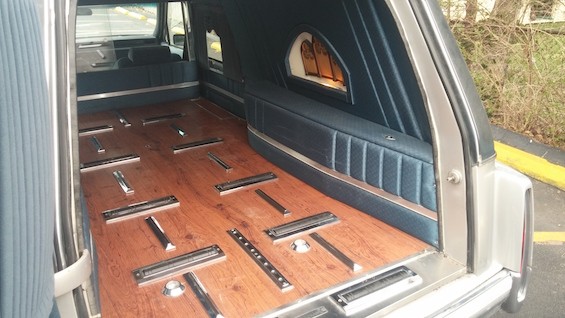 Misfits fans can enjoy a bit of ghoulish fun, as well; the band is considering showcasing the hearse in photo ops outside its music venues.

"We try very hard to not just bring the music of the Misfits but also bring the stage presence, feel and mystique of them with our stage props, the Crimson Ghost and our meticulously recreated outfits," Strychnine notes. "I think this would be another step in that direction."

And it seems that the hearse has gone from one delightfully offbeat owner to another. Strychnine says that he bought the car from a Wright City man who had purchased it from a funeral home employee for his son, thinking that it might be good for hunting and hauling deer. As luck would have it, the son was creeped out and wanted nothing to do with the car, so the hearse went unused until Strychnine bought it.

And if he ever wants to add to We Bite's macabre stage tribute to the Misfits, he knows where to turn.

"The guy seemed to like the idea of me using it with our band's theme, and he even tried to get me to buy some other antique funerary collectibles he had from his friend, like this pewter lectern stand that he thought would make a good stage prop," Strychnine says. "Frankly, if I had had the excess cash I probably would have gone for it.