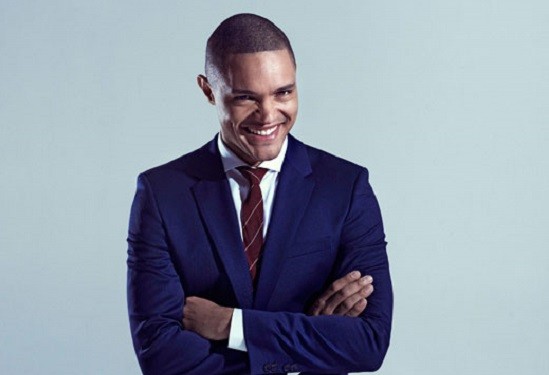 For someone who's been listing "comedian" as occupation on my 1040 for almost a decade, you might be amazed how little I know about the day-to-day workings of my industry.

I don't read comedy blogs, I don't watch late night TV and if it weren't for those I consider personal friends, I would follow zero comics on Twitter. I realize that at points this ignorance has been detrimental to my career, but what can I say? I'm a failed songwriter who fell into this job largely by accident.

So, when a friend from journalism school asked what my "thoughts on today's Trevor Noah situation" were, my first thought was, "You mean that guy with the weird hair on the Bulls? What did he do and why are you asking me? I don't follow the NBA."

A quick login to social media would show the trending topic of the day was not the 2014 Defensive Player of the Year, but rather a South African comedian who had been tapped to replace Jon Stewart as host of The Daily Show and (surprise, surprise) had tweeted things a few years ago that people found offensive.

If the discovery that someone who had been vaulted from relative obscurity to a position of prominence may have said something that someone else found offensive was almost predictable, the discussion concerning the material was even more so.

Those offended immediately christened Noah a bigot, while others (including many comics) rushed to his defense, demanding that the offended need to simply "grow up," to quote a terribly researched article from The Daily Beast I will get into later. And as the predictable, same-old same-old social media battle that rages up whenever someone is accused of being offensive rocked back and forth, any salient points relating to what Noah said, what it means for comedy and what it says about Comedy Central (and journalism) was lost in the cacophony.

Is what Trevor Noah said offensive?

In this era of media companies crying poverty, I find it amazing that one had the money to pay for someone to go back through all of Noah's tweets to find the offending ones from 2009. Having been in comedy as long as I have, I find it much more believable that some bitter comic somewhere did the sleuthing -- which should really tell you everything you need to know about my industry.

Either way, I don't have the time or inclination to go through all of his Tweets, so what I know is based on this story from NPR. Let's take a look at one of the Tweets in question:

Almost bumped a Jewish kid crossing the road. He didn't look b4 crossing but I still would hav felt so bad in my german car!

Placing anti-Semitism aside for a second, the joke is as offensive for its simplicity as it is for its grammar. Not to share too many secrets of comedy, but this joke is comedy 101. Take something Jewish; add something German. Presto, a joke! The more popular version involves a German Shepard interacting with a Jewish person, but either version is really early comedy writing. If he tweeted this more than a year into his career, then on face I question his bonafides.

Comedy criticism aside, the root question is, "Should Jewish people be offended by the Tweet?" And the answer is: It's not my place to say. I'm not Jewish.

In the aftermath of Ferguson, someone posted a quote that in essence said it's not for those to whom an injustice isn't pointed at to decide when those for whom it is pointed have protested adequately. In other words, if you're not the target of an offense, perhaps it's not up to you to decide if something is offensive.

Do people need to "grow up" and stop taking offense to everything?

The phrase "grow up" comes from the sub-headline of an article by Roland S. Martin posted in the Daily Beast. While Martin himself is not a comedian, the opinion he expresses sums up the comedian outrage that has littered my Facebook feed over the last two days -- similar to the same litter that blows through anytime a comic is accused of being offensive.

"I'm sick and tired of your scared, whiny, bullshit fake rage and your pompous-ass attitude," Martin writes. "I'm sick of weakness. I'm sick of wimps. I'm sick and tired of your soft, weak-kneed, oh-I'm-so-offended response to anything that happens today that is quickly turned into an outrage on social media and followed up by the media as if it's the second coming of Jesus Christ."

The "you're too sensitive" defense is a favorite of comedians when defending themselves or their brethren (or sisteren). "I'm a comic! I have the right to say what I want to!" is a position I've seen versions of time and again on social media.

And yes, you do have the right to say what you want -- but not because you're a comic. As far as I know, there was no federal law passed naming comedians a protected class.

The ability to say what you want comes from the First Amendment -- the same amendment that gives others the right to say, "Hey, I found that offensive," or even, "I found that so offensive I'm going to protest."

The other part of the "just relax" defense I find so annoying as someone who does comedy is it's hack-y. Comedians for decades have been complaining (or building bits) on the concept that people are too sensitive. Watch any terrible standup show from the '80s. If you can make it past the rolled-up blazers, some comic was always complaining, "Man, people are too politically correct these days." It's a tired, old premise and it's time for the comedy cow to say mooove along.

But Martin, in closing his article, proves just how little anyone knows about the history of comedy. "I'm sure there is a group of comedians in heaven," Martin writes, "Richard Pryor, Redd Foxx, Moms Mabley, George Carlin, Robin Harris, Lenny Bruce -- saying, "God, thank you for making sure I wasn't alive during the 21st century. Those m$%^[email protected]+?!(~s are too sensitive!"

LENNY BRUCE? LENNY BRUCE? The man was literally arrested for telling a joke and then spent the rest of his career so obsessed that he read the transcript from the trial on stage. It seems that just as many people think they could be a comic as apparently think they know about comics.

What does this mean for Comedy Central?

In 2004, Jon Stewart (and The Daily Show) had a breakthrough moment when he took down the hosts of CNN's Crossfire on their own program. While Stewart's appearance was widely lauded and is often credited for the demise of Crossfire, I always found his appearance puzzling. Stewart spends the majority of the interview lecturing the two hosts on what they do wrong while saying The Daily Show couldn't be held to news standards because it's a comedy program. When Tucker Carlson asks Stewart to be funny, however, Stewart responds, "No. I'm not your monkey boy."

Well then wait, which is it? If it's a comedy program, then it would logically follow that you were brought on Crossfire to be funny. If you think they brought you on as some kind of media ombudsman, then do you not have to accept some of the responsibility that comes with that position?

The Daily Show has attempted to walk this fine line of blasting criticism outward but deflecting all criticism inward under the guise of comedy for over a decade and strangely, this position has been emboldened by journalists themselves.

Multiple times during my time at the Missouri School of Journalism I would have professors argue the importance of The Daily Show. When I would contend that it's just a comedy show (as Stewart did himself in the above clip), I would be told how wrong I was, that the show was important because of the percentage of people who get their news from it.

Depending on what they do with Noah, Comedy Central will finally answer that question: Is it a comedy show or an important news source?

If they see it as some kind of news source, as many of my professors and apparently a large number of its viewers do -- on par with NBC, CBS etc. -- then of course they can't hire Noah. Mainstream news shows would never allow the same from their anchors.

If, as both they and I contend, it's a comedy show, then who cares? This is a story about a guy getting a TV show who wrote some unfunny Tweets that offended some people. That happens every day.

In the case of the latter, however, those who watch the show (and many of my j-school professors) need to admit what Stewart was saying all along -- it isn't a news source. If you use it as your sole news source, well, you don't have a news source. You have a small understanding of current events drawn through the prism of whatever a room full of comedy writers felt they could write the best jokes about.