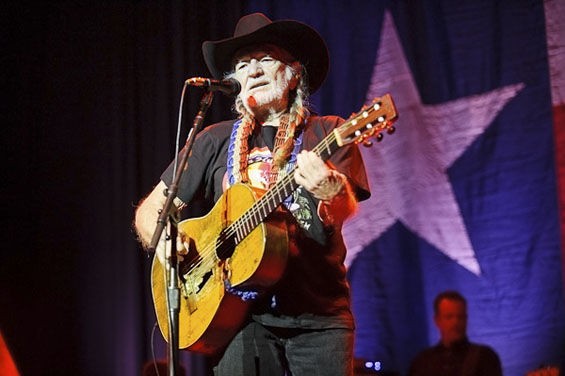 For a man known as the Redheaded "Stranger," Willie Nelson has quite the roster of talented friends and associates.

Over the course of his almost sixty-year musical career, Nelson has found himself collaborating with artists ranging from Johnny Cash to Jessica Simpson. While not all have been as successful as his Highwaymen partnership with Cash, Waylon Jennings and Kris Kristofferson, or as uncomfortable as his "These Boots are Made for Walking" remake for the Dukes of Hazzard movie he did with Simpson, the diversity of artists Nelson draws to him is quite remarkable.

So, as his arrival in the St. Louis area on April 2 is being overshadowed by yet another collaboration (Nelson's May 15 Kansas City concert with Beck), let's take a look at eight of the more interesting parings in Shotgun Willie's chamber.

"The Warmth of the Sun" - Willie Nelson with The Beach Boys

Thirty years later, the Beach Boys would re-record the track with Nelson as part of a country tribute album called Stars and Stripes Vol. 1. The addition of Nelson's weathered voice in place of Love's adds a tone of sapience -- one where the realized acceptance could be of many lost loves, lost presidents or squandered youth.

In 1989, U2's Bono wrote "Slow Dancing" with the intention of giving the song to Willie Nelson. For reasons unknown, the track would not reach Nelson until almost a decade later, and U2 would release a quiet acoustic version as a b-side to its 1993 single "Stay (Faraway, So Close!)" -- a song that was itself written for Frank Sinatra.

U2 would eventually cut the track with Nelson in 1997, replacing the spare original backing track with a full band and supporting vocals by producer Brian Eno. In a weird juxtaposition, filling out the sound with keyboards and a guitar drenched in reverb gives the Nelson-sung version more of a U2 feel, while the stripped-down original featuring only Bono and the Edge is more reminiscent of classic Nelson sound.

6. "Roll Me Up and Smoke Me When I Die" - Willie Nelson with Snoop Dog, Jamey Johnson and Kris Kristofferson

One looking for proof that people find each other through shared addiction need look no further than the combination of Snoop Dogg and Willie Nelson. Though their journeys to musical stardom may have come through very different paths, it was perhaps inevitable that the two marijuana enthusiasts would eventually intersect.

While the pair would eventually collaborate on three different songs, "Roll Me Up..." may be the best, and also serves as proof of the old adage that anyone can sing country music. Rather than rapping, Snoop sings on the song's second verse and harmonizes with Nelson on the chorus, his flighty California drawl contrasting nicely with Nelson's defiance.

In addition to peddling flannel shirts and mopey sadness, music in the '90s was also big on paying tribute. In addition to KISS and the Carpenters, alternative acts of the era also found time to tip their hats to the Redheaded Stranger on the 1996 album Twisted Willie.

As part of the album's promotional campaign, Nelson appeared with the Supersuckers on the Tonight Show to play his 1974 song "Bloody Mary Morning." Watching Jay Leno announce the Supersuckers is almost as bizarre as the combination of Waylon Jennings and L7 -- which appears on track two of the album.

4. "The Maker" - Willie Nelson with Emmylou Harris and Daniel Lanois

After releasing a gospel-themed country album in 1997, Nelson's genre shifted a bit with his next release, 1998's Teatro. The album, produced by Brian Eno collaborator Daniel Lanois, featured re-workings of many of Nelson's songs from the '60s, adding more complex drum parts and other instrumentation to bring a bit more darkness into the tracks' classic country sounds.

Nelson would also record one of Lanois' songs, "The Maker," originally featured on his debut Acadie. The remake would showcase Nelson's voice (and Emmylou Harris' harmonies) with more clarity than Lanios did in the original, as well as bringing up a syncopated drum pattern to match the level of the track's bouncing bass line.

3. "Songbird" - Willie Nelson with Ryan Adams and the Cardinals

With two artists as notably prolific as Willie Nelson and Ryan Adams, one might expect the combination of the two to yield sessions bulging with b-sides and extra material. Songbird, Nelson's 2006 album produced by Adams, however, produced only two new tracks -- Adams's "Blue Hotel" and Nelson's "Back to Earth."

While most of the album featured re-interpretations of classic Nelson tunes by Adams and his band the Cardinals, covers of Christine McVie's "Songbird" and Gram Parson's "$1,000 Wedding" serve as the album's stand-outs. The Cardinals flesh out the stark vocal and piano arrangement of McVie's original, while a choir gives robust depth to Parson's story of a jilted groom.

2. "Two Men with the Blues" - Willie Nelson with Wynton Marsalis

With the terms "alternative-country" and "country-punk" already coined, why not "jazz-country?" What sounds like a terrible combination that could only be dreamed up by Brian Setzer is pulled off quite beautifully by Nelson and Marsalis on their 2008 collaboration.

The re-interpretation of Nelson's classic "Rainy Day Blues" by itself is worth the price of admission (or download, or whatever). While the original featured jazz instrumentation as well, Marsalis and his band sped up the tempo and added handclaps and shouts, giving the track an upbeat quality reminiscent of a late-night impromptu jam in the back of a smoky club.

In the tradition of Johnny and June Carter Cash, and Gram Parsons and Emmylou Harris, Nelson paired with eighteen different vocalists ranging from Dolly Parton to Brandi Carlile on his 2013 album To All the Girls.

Showcasing Norah Jones' sweet vocal innocence against his own weary wisdom, "Walking" tells the tale of a lover ready to leave.