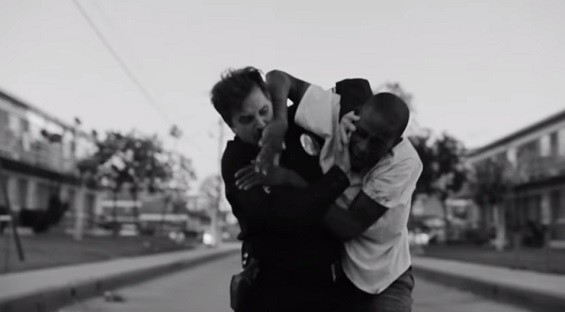 Run the Jewels, the duo of Atlanta's Killer Mike and NYC's El-P, released a gripping new video for "Close Your Eyes (And Count to Fuck)" off of last years universally lauded album Run the Jewels 2 today. The track is one of the most incendiary songs on the entire record, pulling no punches and taking aim at the criminal justice system with a seering guest verse from Rage Against the Machine's Zack de la Rocha as icing on the cake.

The video was directed by AG Rojas -- you may remember him as the director of Earl Sweatshirt's "Earl," which catapulted Sweatshirt and his entire Odd Future crew into the limelight upon its release in 2010.

While that video was an exercise in cheap shock, his new work serves as a powerful commentary on the struggle between police officers and black men in America that has been highlighted so prominently in the months since now-former Ferguson officer Darren Wilson fatally shot the unarmed Mike Brown in August of last year.

"When Run The Jewels sent me this track, I knew we had the opportunity to create a film that means something. I felt a sense of responsibility to do just that," says Rojas in a press release that accompanies the video. "We had to exploit the lyrics and aggression and emotion of the track, and translate that into a film that would ignite a valuable and productive conversation about racially motivated violence in this country."

The piece has two characters. One is a black man, clad in a white T-shirt. The other is a white police officer. When the video opens, both men are breathing heavily, exhausted, and showing marks of a struggle on their faces. When the officer yells to the man, "Don't move!" the man turns to run, and both get caught up in a tussle.

No punches are thrown. The two combatants have little fight left in themselves from the very start, and mostly just grapple back and forth, alternating positions of dominance and submission throughout.

"For me, it was important to write a story that didn't paint a simplistic portrait of the characters of the Cop and Kid," Rojas explains. "They're not stereotypes. They're people -- complex, real people and, as such, the power had to shift between them at certain points throughout the story."

The police officer puts the man in a chokehold -- hearkening to the death of Eric Garner in New York City last year. Soon, though, the tables turn, and the man has the officer in the same chokehold.

"Their violence is communicated through clumsy, raw emotion," Rojas says. "They've already fought their ways past their judgements and learned hatred toward one another. Our goal was to highlight the futility of the violence, not celebrate it."

Day turns to night in the midst of the struggle. Both men occasionally collapse from exhaustion. Each flees from the other at differing points in time.

At one point the fighters struggle over a can of pepper spray, which goes off and hits both of them in the eyes. The black man turns and heads inside his house, opens the fridge, and dumps milk over his face to relieve the burning. The visual is reminiscent of the many pictures that came out of the Ferguson protests in August, in which milk was often used to combat the effects of tear gas. The officer comes inside soon after, takes the milk and pours it on his own face as well, and the fighting continues.

At the video's conclusion, both the officer and the man enter a bedroom, one by one, and each sit on opposite sides of the bed, weary and out of breath and clearly trying to make sense of the struggle. The implication seems to be that both men will rest and awaken tomorrow to begin the battle anew. The video ends with the black man staring out the window, envisioning himself outside, arms outstretched, free.

"I am really proud of where we ended up, and I am very thankful that our actors Shea Whigham and Keith Stanfield committed to these characters 100 percent," Rojas says. "They breathed complex life into two people who are usually portrayed in simplistic ways -- as archetypes. I can tell you it was an emotional shoot day.

"It is tough to re-create moments that are so fresh and prevalent in our world today. It affected all of us in deep ways. But I believe that it is important that the way we feel when we see these events in real life has an effect on us. That we resonate with what we know to be right and we don't numb ourselves out so those feelings can simply be swept away, we must confront them and take some action, however small, or we'll be stuck in the same cycle of violence and hate."