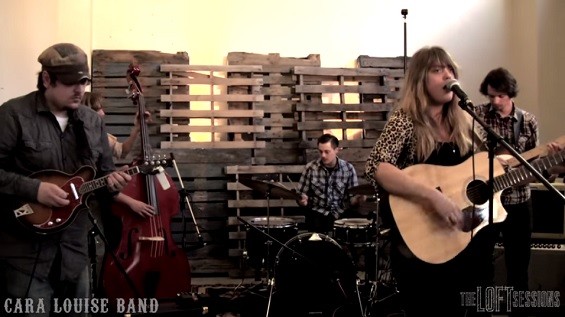 In 2015, when major world events are just a livestream away, official live albums are a dodgy proposition. In the boom days of major labels, concert recordings often served as little more than catalog fodder or stopgap cash grabs for marquee artists; these days, fans can re-create the concert experience through shakily shot iPhone videos posted to YouTube.

So there's something both charming and a little low-stakes about the Cara Louise Band's twelve-song live album, a digital release available at the group's Bandcamp page. The quintet released its debut EP To Be Dead Is to Be Known just last August, so many listeners will likely have their first taste of the band through this competent, no-frills recording captured at the Demo.

You won't hear a lot of acoustical warmth from the venue (and the sparse but supportive crowd gives only a taste of audience interaction); what you'll hear instead are the band's tightly constructed, classic-country-referencing songs given flight by Cara Wegener's strident and commanding vocals. Much like recent Nashville-via-New York export Nikki Lane, the Cara Louise Band creates a style of country-rock -- with no trace of "alt-" signifiers -- that showcases the alternating moods of strength and frailty in its singer's voice.

Wegener surrounds herself with supportive musicians who add country color while cutting a clear path for her acoustic strums and flinty vocals. Guitarist Adam Donald offers some nice, lithe lines on the steel guitar for "You Make Me Happy" and lends a starlit mood to new track "Don't Look Back." That song in particular shows off mandolin player Nick Adamson, who uses well-placed plucks to chart a path throughout its stops and starts.

Wegener dedicates the clear-eyed ballad "Worrying About My Soul" to her parents, resolving to follow her arrow as drummer Skyler Leeds switches between spare rim shots and martial snare rolls. Some static gets in the way of "South City Anthem," but that's just as well; our city's stock of country-fried odes to cheap beer and dive bars is well past full. Wegener is a much better songwriter when she shakes off some of those genre trappings.

Rich with imagery and scene-setting detail, "To Be Dead Is to Be Known" is a thrumming rumination on mortality and artistry that finally -- in the set's penultimate song -- unveils a band that throws some grist and grit behind these songs that are too content to gently lope along.

Listen to the album in full below.