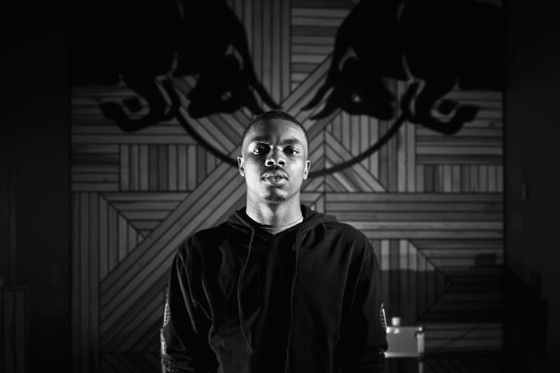 Vince Staples isn't trying to be hard when he tells stories about his gangbanging past. He also doesn't care much for smoking weed, wearing bling, banging bitches or clearing out his bank account to make an Instagram video.

Instead, Hell Can Wait -- the 21-year-old Long Beach, California, emcee's Def Jam EP -- dropped in October as a "Fuck tha Police" for the new generation. It's filled with all of the ballsy storytelling, truthful street depictions and silky poetic verse that has been missing from gangster rap for more than a decade.

"Back in the '90s, music used to emulate the streets, but now the streets emulate music," Staples says.

Like all of Staples' independently released mixtapes and albums before it, Hell Can Wait takes the harsh realities and daily struggles of life in us-versus-them North Long Beach and turns them into urgent tracks that are harrowing in their production yet inviting in their breezy vocal delivery. Rife with social commentary, the EP's seven songs fly in the face of mainstream rap's hook-loving braggadocios.

The goal, Staples says, is to raise awareness of his situation and let people know what's really going on. If rap can get the whole country to smoke weed and sip on lean, then why not use that power to make a bigger impact?

"My music isn't conscious. My music is reality," he says. Gangbanging "is not fun, and you're probably going to regret certain things that you do. My music is about that situation, and that situation is more complex than a lot of people make it out to be."

Hell Can Wait turns these complexities into sonic wonderlands. "Blue Suede," the EP's first single, wails into existence with a siren-call sample that chills to the bone and a deep bass built for trunk rattle. Its insistent chorus -- "New shoes with the blue suede/Young graves get the bouquets/Hope I outlive them red roses" -- is an unlikely leniency plea from the same emcee that earlier on the EP raps "Don't shoot for the sky/Shoot for the soul." That song, "65 Hunnid," about a revenge shooting at a liquor store, bookends its heart-wrenching story with a muted trumpet sample.

Staples' biggest enemy these days isn't a rival gang or even his own demons; it's the Long Beach Police Department. Songs like "Hands Up" (the first line of which is "North Division tryin' to stop my blackness"), "Fire" and even "Blue Suede" take the disdain head-on, calling out the LBPD, LA County Sheriff's Department and the district attorney for everything from shooting citizens in broad daylight to using Twitter to track gang activity.

Staples proves he's not afraid to confront the issues that continue to plague not just North Long Beach, but urban America on the whole: Gangbanging doesn't make you cool, today's rap is cliche-ridden and corny, and more than twenty years after the Rodney King trial (and in the immediate wake of Ferguson), the police are too often still assholes.