Ferguson's Influence on Kendrick Lamar's To Pimp a Butterfly 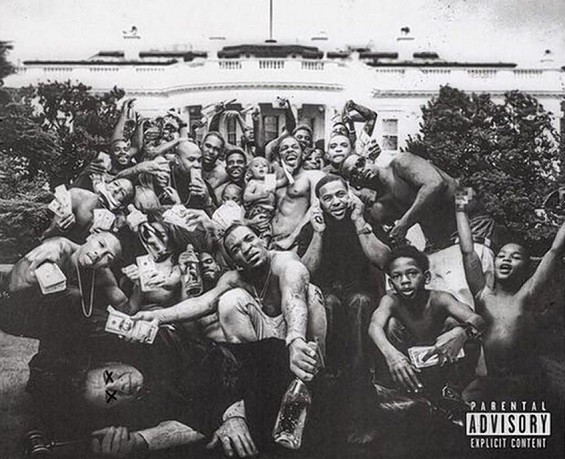 Kendrick Lamar's highly anticipated new album, To Pimp a Butterfly, was dropped like a ton of bricks on an unsuspecting world today, a full week prior to its announced release date. The whole damned Internet has since lost its mind over the album, which eschews radio-ready singles for, instead, a sprawling jazz- and funk-inflected 79 minutes of pain, confusion, clarity and triumph. The highly cerebral work offers as many questions as answers as Kendrick attempts to bring the lessons he's learned through his rise -- from the streets of Compton to Grammy-winning, international fame -- back to his community.

See also: Kendrick Lamar Addresses Criticism to His Ferguson Remarks With "The Blacker the Berry"

In an interview with the New York Times, published today, one of the producers from Lamar's TDE crew acknowledged last year's turmoil in Ferguson as an influence on the direction of the album:

Mark Spears, an in-house producer at Top Dawg Entertainment known as Sounwave, said there is "a whole lot of anger, a whole lot of frustration" in the music, which was influenced in equal parts by Miles Davis and Dr. Dre. "The world today has a bunch of problems. That rubbed off," he said, referencing the unrest in Ferguson, Mo.

"Kendrick is somebody who, in his music, is very much aligned with movement and activism, and the whole 'Black Lives Matter' movement," fellow rapper and activist Talib Kweli, who spent time on the front lines in Ferguson, told Rolling Stone in another interview published today. "I hear that movement in his lyrics."

Throughout the course of the album, themes of guilt and pride run side by side. The guilt comes through in Lamar's fear that he has abandoned his community in the pursuit of wealth and fame, and is especially evident in the song "u," which can be seen as a self-hating counterpoint to his single "i," which bursts with positivity and netted the rapper two Grammy awards for Best Rap Performance and Best Rap Song early this year. The pride found on "i" and throughout the rest of the album is largely in celebration and empowerment of those with black skin, regardless of the particular shade -- see "Complexion (A Zulu Love)."

Lamar's "The Blacker the Berry," released in February as the second single from the album, plays both themes concurrently, a confrontational, fiery track that doubles down on his controversial Ferguson-related remarks to Billboard in early January. At that time, Lamar drew criticism from some in the activist community for saying, "I wish somebody would look in our neighborhood knowing that it's already a situation, mentally, where it's fucked up. What happened to [Michael Brown] should've never happened. Never. But when we don't have respect for ourselves, how do we expect them to respect us? It starts from within. Don't start with just a rally, don't start from looting -- it starts from within."

See also: Kendrick Lamar Addresses Criticism to His Ferguson Remarks With "The Blacker the Berry"

In his new interview with the Times, Kendrick clarifies this sentiment even further:

"When I speak, I speak for self first -- this is my experience," Mr. Lamar said in response to critics who said he was ignoring institutional racism. "I know where I come from. I know the hurt that I've caused families," he added. "These are my demons."

As for police brutality and political disenfranchisement, "I know the history," he said. "Black and brown pride have been taught in my household for a long time."

At 15, Mr. Lamar said, he experienced his first of two Los Angeles Police Department house raids. "I've been stomped in the back," he said. "I'm not talking to people from the suburbs. I'm talking as somebody who's been snatched out of cars and had rifles pointed at me."

But, he added, "Playing the victim only works so long."

On the album, after some "soul-searching," including visits not only back to Compton but also to Nelson Mandela's cell on Robben Island, Mr. Lamar preaches black unity in the face of oppression. Self-pity turns to on-the-ground action and consciousness-raising.

Lamar's Billboard interview call for "respect" within the black community is brought into further focus on the album's twelve-minute closing track, during a spoken-word passage that splices audio from a Tupac interview in with Lamar's words in order to give the effect of a conversation between the two, with Lamar reading this poem at the passage's outset (emphasis added):

I remember you was conflicted
Misusing your influence
Sometimes I did the same
Abusing my power, full of resentment
Resentment that turned into a deep depression
Found myself screaming in the hotel room
I didn't wanna self destruct
The evils of Lucy was all around me
So I went running for answers
Until I came home
But that didn't stop survivor's guilt
Going back and forth trying to convince myself the stripes I earned
Or maybe how A-1 my foundation was
But while my loved ones was fighting the continuous war back in the city, I was entering a new one
A war that was based on apartheid and discrimination
Made me wanna go back to the city and tell the homies what I learned
The word was respect
Just because you wore a different gang color than mines
Doesn't mean I can't respect you as a black man
Forgetting all the pain and hurt we caused each other in these streets
If I respect you, we unify and stop the enemy from killing us
But I don't know, I'm no mortal man, maybe I'm just another ni--a

"Would you consider yourself a fighter at heart, or somebody that only reacts when they back is against the wall?" Lamar asks Tupac, through the ether of death and time and archival recordings and modern technology.

"Shit, I like to think that, at every opportunity I've ever been threatened with resistance, it's been met with resistance," Tupac says. "And not only me, but it goes down my family tree. You know what I'm saying? It's in my veins to fight back."

Later in the conversation, Lamar asks, "What you think is the future for me and my generation today?" This is Tupac's response:

"That's crazy man," Lamar says. "In my opinion, only hope that we kinda have left is music and vibrations -- lot of people don't understand how important it is."

Listen to the new album via Spotify below: