On his debut LP, Black Sunday, University City native Arshad Goods is a man divided. Over nine tight, soulful tracks, Goods presents myriad versions of himself with any number of knowing contradictions: a hedonist with a higher calling, a status seeker who rejects the material world, a college-educated African American man in a city that will always see him as a black boy.

Closing track "Marginalized Man" serves as a mission statement for everything that precedes it and ends the album on a note of soul-searching uncertainty: "Sometimes I wanna rap about money and bitches instead of saving the world," Goods delivers in a dry croak. 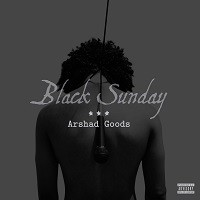 He does both on Black Sunday, and that duality, among others, serves as the engine for Goods' pinpoint lyrics as he examines the external and internal. The hard-hitting 90-second title track opens the album with a critique of hip-hop tropes, some of which he'll deploy later in the album. Even the simple, arresting album cover offers no easy answers: Goods' body dangles from a noose made from a mic cord -- was this self-inflicted, or a modern update of "Strange Fruit"?

Goods' refusal to be put in a box goes past his rhymes; the rich sonics and stuttering beats (many were supplied by local talents Orlando Vaughn, Davy Jones and Ace2euce) range from hard-hitting trap music to funky Soulquarian vibes. One of Goods' strengths is his willingness to not just bounce around styles and subgenres of hip-hop with comfort, but to subvert expectations and change directions within the track.

The Quiet Storm jam "Mary Go Round" is as close as the album gets to a slow grind (aided in no small part by Aloha Mi'Sho's breathy vocals), but Goods drops a particularly spitfire verse where most emcees would keep it smooth. That he ends the track with an emasculating voicemail message from his paramour is further proof that these songs thrive on conflict, tension and a refusal to play straight.

Though not overtly topical or political, Goods' best lines are rife with questions of race and identity, and this smart, searching album comes at a time when those personal questions have citywide implications.