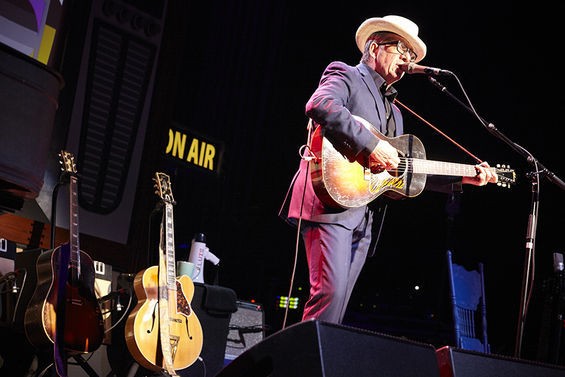 About three songs into his nearly two-and-a-half hour show at the Pageant last night, Elvis Costello informed the crowd on how he plotted out this mostly acoustic, mostly solo show.

"I thought tonight I would just sing about love and fidelity -- and then I thought it would be a pretty short show."

See also: Our Complete Slideshow of the Concert

He had just finished a beautifully languorous version of "Watch Your Step," about the machinations of a gang of neighborhood toughs; he was about to start "Accidents Will Happen," one of his finest romantic mea culpas. For a singer who famously told reporters nearly 40 years ago that his two chief songwriting motivations were revenge and guilt, the idea of a night of love songs was an easy laugh.

And yet, Costello -- a famously chameleonic talent who has dipped a toe in almost every form of popular song -- managed to spin out a few legitimate, heart-on-sleeve love songs throughout a setlist that was part career retrospective, part record-crate dig and part parlor show. Costello is calling this early springtime run through a dozen or so American cities his "Detour" -- a change of pace from playing shows with his versatile rock & roll outfit, the Imposters. Armed with a few acoustic guitars and as stacked a songbook as any living songwriter, Costello charmed, crooned and rattled the rafters. "The Beloved Entertainer," once used as a bitter epithet on the cover of 1989's Spike, is now a more-than-apt descriptor.

After a 30-minute opening set from Larkin Poe, the Atlanta-based folk duo of sisters Rebecca and Megan Lovell (who would join Costello for an extended encore), Costello took the stage, tipped his wide-brimmed chapeau, and launched into a shuffling, resonant "(The Angels Wanna Wear My) Red Shoes." He didn't take long to go deep into his catalog, moving to "Cheap Reward," a cast-off from 1977's My Aim is True that eventually morphed into "Lip Service" on his next LP. Fans of his greatest hits would have plenty to love over the set's 32 songs; hardcore devotees would have more than enough rarely played gems and nearly forgotten b-sides to brag about at the next CostelloCon.

The biggest swoons came when Costello altered the one man/one acoustic guitar format. A three-song set at the piano opened with "Shipbuilding," perhaps the clearest distillation of the man's personal and political pathos. He acknowledged his own clumsiness on the instrument, but the song's jazz-inflected melancholy rang out. The song garnered one of several standing ovations from the seated crowd. He had a lighter touch on "Let Me Tell You About Her," a song from North which serves as a love letter in both lyric and in composition to his jazz-pianist wife, Diana Krall. While at the piano, Costello turned his cover of "I Can't Stand Up for Falling Down" back into the soul ballad that Sam & Dave originally recorded.

While his last proper album, Wise Up Ghost, was made with hip-hop lifers the Roots, much of Costello's last decade has been spent in the thrall of Americana and folk idioms: pre-war blues, soft-touch bluegrass, odes to Jimmie Rodgers. That fascination colored much of his performance last night, from the modified finger-style guitar playing on "Ascension Day," his riff on Professor Longhair's "Tipitina," to a brief interlude where he played storyteller while seated on a rocking chair. Armed with a parlour-sized guitar and looking every bit like Leo Kottke (down to the crossed legs and big white hat), Costello wove stories about his family into a short but sweetly played set of songs. He dedicated a dulcet-toned version of the 1930 standard "Walkin' My Baby Back Home" to his eight-year-old twin boys, dusted off the Get Happy!! b-side "Ghost Train," and deconstructed the knotty "Beyond Belief" and turned it into a folk strummer.

After ending the proper set with a few more best-ofs -- a discursive, clanging "Watching the Detectives" and an arrow-true take on the brilliant "Man Out of Time" (introduced as "a song I hate") -- Costello returned for an extended encore with Larkin Poe. Armed with a mandolin, an overdriven slide guitar and rootsy harmonies, the Lovell sisters gave thumping support to "Pads, Paws & Claws" and rescued 1984's "Love Field" from the recorded version's infamously dated production.

Since fans are used to seeing Costello with some version of the Imposters (which is itself a slight change from his golden-era backing backing the Attractions), hearing the singer supported by folk instruments and female voices put a new shine on his songs. "Indoor Fireworks" and "Brilliant Mistake" were the standouts of this set; both are from 1986's King of America, Costello's first foray into what we now call "Americana" and what was, in hindsight, a predictor of his fascination with our country's folk heritage.

Costello returned for a brief solo set, this time inside the oversized television that served as the stage's backdrop and scrim. "Alison" came first, played tenderly on an overdriven Fender Jazzmaster, while "Pump It Up" and a cover of Dinah Washington's "TV is the Thing (This Year)" were broadcast through a jumbo-sized hollowbody. The ladies of Larkin Poe came out for the obligatory but always stirring "(What's So Funny 'Bout) Peace, Love and Understanding" before ending with a soulful, contemplative "Lost on the River." It was one of several songs from The New Basement Tapes that Larkin Poe assisted on; Costello seemed especially taken with those formerly lost songs of Bob Dylan that he helped revive.

Fans who missed out on the sold-out show can take some solace that Costello and the Imposters will be back this summer to play the shed formerly known as Riverport as the opening act for Steely Dan. Just don't expect this range of songs or for the intimacy of the Pageant to translate to the lawn seats.