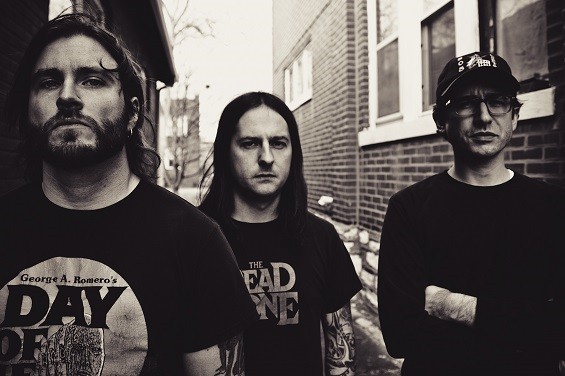 St. Louis' own Lions Daughter has inked a deal with France-based metal label Season of Mist, home to extreme metal acts including Mayhem, Morbid Angel, Saint Vitus and more. The band is slated to enter the studio this spring, aiming for a late 2015 release date for its debut with the label.

It's crazy as fuck that they'd want to work with us," vocalist/guitarist Rick Giordano tells RFT Music. "They put out albums by Deathspell Omega, Drudkh, Nightbringer -- shit that's truly a higher level of artistry than I can even wrap my head around. They are undoubtedly the best label a band like ours could ever hope to work with, and we consider it the highest honor."

The Ten Best St. Louis Metal Bands
It's a good time to be a metal fan in St. Louis. No, not because of the corporate metal shows...
Read more


Seasons of Mist seems equally excited. From its press release:

The band was originally conceived out of a hatred for the insincere and uninspired fodder choking the mainstream metal scene. They take notes from a myriad of metal's extremes, but live by no musical limitations and are driven to please no audience but themselves. The band doesn't play as if it simply wants to see the world end; it sounds like they want to be the ones to destroy it.

"The only way I can make sense of it is that we just got lucky," Giordano tells us of the how the deal came about. "We played some shows with Pig Destroyer last year, who were kind enough to tell a few label friends to look us up. [Label owner] Michael Berberian contacted me by email a few weeks later saying Misery Index had also been telling him about us, so a huge thanks to both of those bands.

"I don't know what time it was in France but it was about 3 a.m. when I got that email here and I'm surprised my drunken rambling response didn't scare him off," he adds. "We immediately demoed some new songs for Michael and everyone at the label to hear and holy shit, we were offered a contract. A goddamn Cinderella story."

RFT Music has been championing the Lion's Daughter for years, repeatedly naming the group St. Louis' best metal band. Congrats to the boys.

"We'll be heading into the studio in mid-April," Giordano says. "I'm not able to say with who yet, but I can say that our absolute first choice for a producer is the guy that we somehow got. And holy shit we couldn't be more excited."

Listen to two tracks from the Lion's Daughter's 2013 collaboration with Indian Blanket, A Black Sea, below: