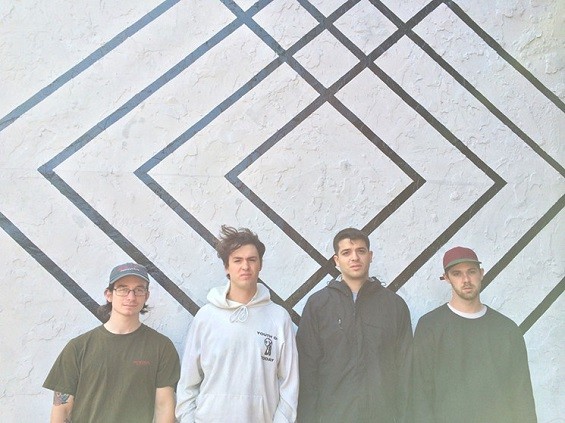 When you're a musician, the place you grow up in has a huge impact on the type of music you write and the message you convey to the rest of the world. The Ramones talked about the chaotic struggle of living in New York and doing anything to get by in "53rd & 3rd." Years later, the Los Angeles band FEAR told us about its cockroach- and piss-filled apartment in "I Love Living in the City." Tom Waits serenaded his hometown of San Diego, and Elvis Presley never seemed to shut up about Memphis.

But what if you're from a town that no one's ever heard of? Title Fight, hailing from the relatively obscure town of Kingston, Pennsylvania, is a perfect example of how not all good music comes from big cities. Hyperview, the bands latest, is a blissed-out, down-tempo dream with a heavy, hardcore spirit. Although it may not be intentional, it is indicative of the group's hometown, because it is working class and tough enough to exist in a local scene but ambitious and inventive enough to want to break out into larger markets.

We asked bassist/vocalist Ned Russin to tell us about the town where he and the band comes from.

Andy Thomas: What is the music scene like in Kingston, Pennsylvania?

Ned Russin: Kingston is the suburb to Wilkes-Barre, Pennsylvania, so when we speak of Kingston it's usually referring to a larger area. Kingston's population is only 13,000 some [people], so the "Wilkes-Barre" scene consists of all surrounding towns in the general area. There have been punk and hardcore shows going on in our area since the early '90s, so we have a really cool history of bands, venues, shows, etc.

The scene is really all over the place genre-wise, but I guess if there was one main genre it would be hardcore. Right now it's a little rough because we don't have a venue, but we have been doing shows at VFW halls and churches, so we are moving slower than normal but still going.

What are some of the best bands from there or still playing there?

Here are some of my favorite local bands: Cold World, Frostbite, United Youth, Life of Reilly, Magnus, On Deck.

Do you still live there when you are not on tour? If not, where did you move to and why?

I recently moved out of the area because my girlfriend is going to graduate school, but I still visit home a lot.

What are the best venues to play there?

As I previously stated, we don't have a current venue. My favorite venue was Cafe Metropolis in Wilkes-Barre that was open for like fifteen years. It had a nice sized stage and was the perfect sized room. Some of my best teenage memories were held in that room.

What was your first show like here? Was it with Title Fight or another band?

The first show Title Fight ever played was there on October 17, 2003. We played like five songs and were extremely nervous because we were thirteen years old and playing for the first time.

Do you write any lyrics about your hometown?

Not specifically about our hometown, but there are a lot of local references. I guess everything in my life is within the context of Kingston because that's what I know.

Is any part of the band inspired by where you're from?

Yeah our identities were formed because of where we are from, so it is an integral part of the band. I can't separate the place from myself or vice versa, but I think a lot of my young adult self and therefore the formation of the band is directly influenced from the local scene.

Anything else I should know about this area?