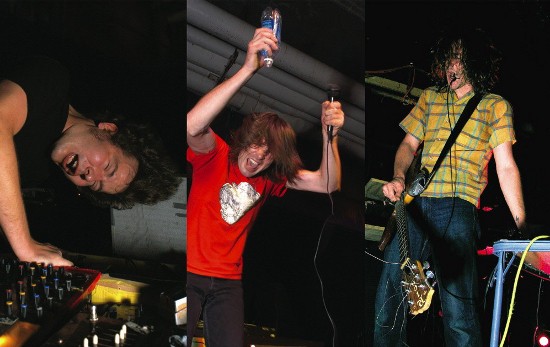 Wolf Eyes came along in the late '90s, a time when noise was in vogue and breached the walls between audience and performer. Fashion tends to move in twenty-year cycles, so the world is about due for a new noise renaissance. Led by American noise alum Nate Young, this trio builds strict industrial beats over a metallic-guitar mess. Tones drop and climb in rapid succession, twisting in tandem around scratchy sonic abrasions. The whole affair feels both confined and completely free -- a testament to the band's versatility.

Wolf Eyes w/ Yowie, Brain Transplant Monday, March 16 The Luminary 8 p.m. | $10/$15 Remember when Yowie received the RFT Best Of St. Louis award for Best Noise Band in 2004? From ten years ago: "Describing this as noise music is unfair; it implies that they merely make noise. Fueled by frantic pounding from drummer Defenestrator (Shawn O'Connor to his mom), the band sounds like Einstein discovering the theory of relativity while hopped up on meth and psilocybin -- genius ideas of how everything connects spewed raw and uncontained, formulae and fact swirling in broken code, riding between rational thought and complete breakdown. Now that the band's signed to Skin Graft Records and is working on a full-length album, the grandiose chaos of Yowie will soon be loosed on the world. Will the world understand it? Not even Rod Serling could say."

In the late '90s and early '00s, Brain Transplant founding member Chris Smentowski was responsible for bringing some of America's most prominent noise acts to St. Louis (including Wolf Eyes). His influence not only helped inspire other local promoters to book experimental shows of their own, but his work in Brain Transplant no doubt inspired many to follow the path of noise. Many people in this city discovered the genre because of this band.

And for the (un)official Wolf Eyes afterparty: O'ó of Dallas performs with Bludded Head and Van Buren at Foam. The ensemble (featuring members of the Unconscious Collective) blends frantic free jazz with low harsh tones to build a dark, threatening sound.

Follow through for more experimental concerts in March. Skarekrau Radio w/ Curt Oren, Googolplexia Thursday, March 19 Schlafly Tap Room 9 p.m. | free Free-jazz vagrant Curt Oren brings his singular style of spazzy saxophone to a free Thursday night gig at the Schlafly Tap Room featuring St. Louis natives Skarekrau Radio and Googolplexia. With circular breathing, Oren builds a raw, unrelenting cycle of sound for both composed and freely improvised pieces. He also tends to collaborate with other acts, so don't rule out a possible guest appearance. This show's for fans of both punk and avant garde -- and those who like to hear the bridge between.

KDHX 88.1 FM and New Music Circle present Matthew Shipp w/ Michael Bisio Saturday, March 28 The Stage at KDHX 7:30 p.m. | $10-$20 "Legendary" is a loaded word, especially when describing musicians. Whether it's from his own solo records, countless collaborations with world-renowned players or his most recent (and very publicized work) album Root of Things, most fans of free jazz will know Matthew Shipp from his name alone. The video above gives a fairly accurate preview of what this show has in store (sans the drummer). Shipp's style tends to be more busy than not, but he pays careful attention to texture, laying low only so he can work through exhaustive runs. Dense, melodic layers of piano drift over rhythms with a steady flow. As part of the Matthew Shipp Trio, bassist Michael Bisio provides a rich low end with a subtle but swarming style of fretting. Expect melodic bass to crash in tandem with chaotic keys.