Louis Wall Is a Tireless Asset to St. Louis Music 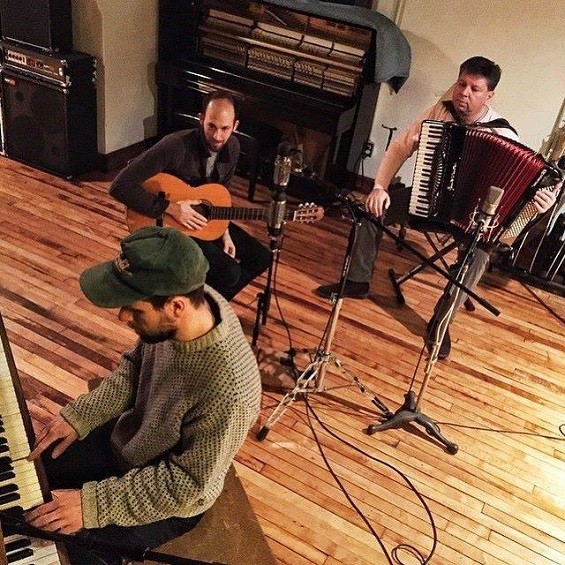 If music can knock down walls and build community -- and here's hoping it still can -- then local drummer and producer Louis Wall is using it to do truly holy work within some forgotten communities in St. Louis.

Under the aegis of his recording project the Texas Room, Wall collects musicians from across St. Louis, but with an emphasis on our immigrant population and the songs and sounds of their homelands. If the St. Louis community has taken baby steps in bridging the divide between scenes, styles and neighborhoods, the inroads to our newest citizens have, historically, been nil.

Wall's project is both idealistic and ambitious, and in February the first fruits of this collaboration were unveiled. He plans to release one song a month until the year's end, and the first track, "Under Dragoste," mixes a Romanian-sung pop song, Klezmer clarinet and a Latino children's choir while still producing a cohesive composition. As melting pots go, this one coalesces nicely.

Singer and guitarist Ben Tulin delivers the song in a lush, laid-back tenor that drifts along like a breeze despite the slightly dirge-like tempo. His singing style is reminiscent of Andrew Bird's, though given the old-world elegance of the song, Beirut's Zach Condon is a more fitting signpost. Chloe Feoranzo, best known as the saxophonist for Pokey LaFarge's band, lends a growling, resonant clarinet counterpoint to Tulin's vocals that only hints at her Dixieland bona fides. Wall handles percussion and his Jumbling Towers bandmate Joe DeBoer adds plinky barroom piano, but it's the normally Spanish-language children's choir Adria and Her Treasures that gives the song its second wind.

The kids might not know what the words they are singing mean (and unless your Romanian is up to snuff, you won't either), but the song's message comes through in their enthusiasm. The lyrics translate to "where there is no love, there is nothing." It's a simple, potent message, and Wall's project hopes to build something where there once was nothing.

If the Texas Room is Wall's main concern these days, he still finds time to lend his production and percussive talents to more straight-ahead fare. He appears on Natalie Huggins' latest batch of songs, the three-track maxi-single "Giving Gifts." Huggins, an emotional pianist and expressive, acrobatic vocalist, formerly performed as part of the strings-and-piano trio Wax Wine and recorded a sextet of Wallace Stevens poems with the Rats & People Motion Picture Orchestra, but this collection finds her in her purest state: facing love's slings and arrows with breathy intensity and dramatic instrumentation.

A sawing string section and Micah Mickles' insistent drum programming give a steady, suspenseful pulse to "Giving Gifts." Huggins' message can get lost in the clouds when she pushes her voice to its highest range, as she does in parts of "Lullaby," though she's more direct on "Typically Funny." These are more performance pieces than pop songs, and that suits Huggins' theatricality. Casual listeners, though, may be thrown by the tracks' tendencies toward halting tempos and ruminative songcraft.

Listen to both of the projects via the streaming links above.