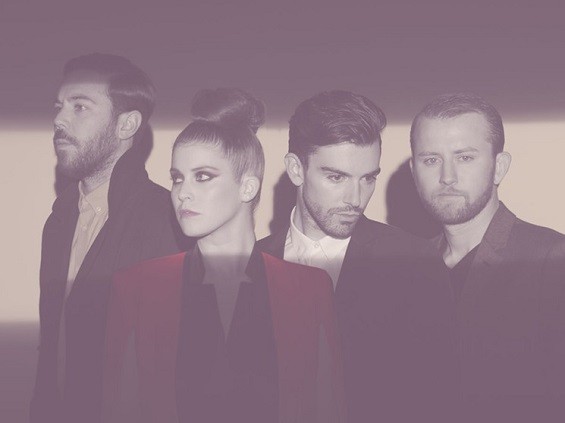 Milo Greene's 2012 self-titled debut won the group plaudits for its inventive, cinematic pop. For its followup, however, the band's members decided to challenge themselves. They wanted a more lively, exciting sound as opposed to the dreamy, melancholy feel of the first LP.

In the years that have passed since the recording and completion of Milo Greene, they agreed that their sound would inevitably go in a new direction. Though it may raise some eyebrows among long-time fans, Andrew Heringer says the change was a natural progression.

"With the four of us, there's a lot of ideas and inspirations," he explains. "We bought new toys, synthesizers and played with different kinds of drum samples and grooves. At times on the first record, we were protective of this baby. There was a different agenda from where we wanted to start with this record."

"The idea of switching genres doesn't exist anymore," adds Robbie Arnett. "If the songwriting is there, it doesn't matter if it's a synth or mandolin -- it will be good."

For its first album, the quintet stayed in what its members called the "cabin in the woods" on the property where they recorded outside of Seattle. This time, they chose the luxury of a fifteen-minute commute from their homes in the Los Feliz and Silver Lake areas of LA to a studio in nearby Highland Park. Working with producer Jesse Shatkin (Sia, Foster the People, Ellie Goulding), the group originally wrote 50 songs that were whittled down to thirteen.

Getting to that point was a challenge. As a band with four singers, songwriters and multi-instrumentalists (drummer Curtis Marrero yields to his bandmates on these matters), there were inevitable arguments and disagreements.

"Everyone has their own opinion and everyone nitpicks the shit out of everything," Arnett says. "We have different influences and like different things, so it's a miracle when we can get anything done."

"You have to know when to fight and let things go," Graham Fink continues. "Our differences are our greatest strengths, and there's something really special about the contrast. It may be difficult at times, but we also realize it's incredibly valuable."

Excited to show off Control, the band released songs one by one ahead of the album's arrival. Because the group hadn't released new music in two and a half years, its members were eager to see fans' reactions.

Ultimately, fancy new toys aside, they all agree that the songwriting is exactly the same. Even with what seems like a drastic sonic change, they insist that the blend of old and new songs will remain cohesive.

"These songs all can be played on an acoustic guitar, which is generally how things start out," Marlana Sheetz explains. "Each album will have specific vibe, but the origins will always be the same."

Control is more than just the title of the new album. It's a theme and a mantra, something incorporated into the band's ethos.

"Since we have four different voices and influences, this project has the potential to swing as far as the pendulum of sound goes from record to record," Heringer says. "The four us could be into something totally different four years from now. As an artist it's scary, but at the same time, it's very exciting."