Updated: St. Louis Punk Band Raising Money to Have Its Own Drummer Killed

[UPDATE: Needless to say, GoFundMe pulled the crowd-funding effort after only two days, with $27 raised toward the goal. Perverto isn't upset though.

"We sold some more CDs, a few people are asking for interviews, a bunch of fat gals say they want to gobble my penis," he says. "The only downside is Crash is still alive and well, but you can't have everything.

"And just for the record, I had every donation refunded," he adds. "I don't want your money. I'll take cigarettes though."

St. Louis' long-running kings of shock-punk, Without Mother Fucking Order, have started a new crowd-funding campaign to have the band's drummer, Crash, killed. With a goal of only $100, it actually seems like one of the more fiscally feasible efforts of its kind.

From the GoFundMe page:

Crash has gotten so old, that we at Without Mother Fucking Order Industries have decided it's best he be euthanized. We have waited 16 years for him to die of old age, but recently discovered that he is a Highlander much like Connor MacLeod, and the only way he can die is by decapitation.

The members of the band envision a sort of head-ripping-off machine with which to get the job done. "We tried to cut his head off with a sword," vocalist Captain Perverto says, "but everyone at W.M.F.O.I. are a bunch of nerds who only have those cheap Samurai replicas."

"Above, you will see a diagram of the Death Machine we need to make in order to accomplish our goal and to pay our super scientist Tex Johnson to finish and build the design," he adds.

It would indeed seem as though Crash is immortal, having been a part of the local punk scene since the early days of St. Louis' Very Metal in the mid- to late-'90s. (If ever you found yourself standing around outside Vintage Vinyl in that timeframe, sporting any manner of punk-rock apparel, there is a decent chance he approached you and started talking about it.) 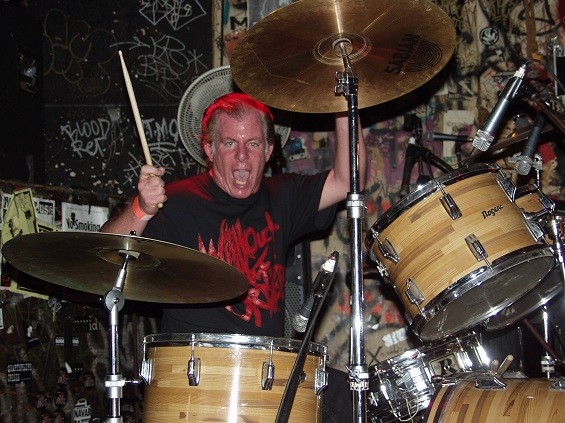 At press time, $10 had already been raised toward the goal. It should also be noted that WMFO presently has a listing on Craigslist seeking a new bassist. It can probably be assumed that the band has ripped the head off the old one already.

"We beg of you, please help make this happen. It is for the greater good, the betterment of humanity," Perverto pleads in the campaign's conclusion. "He's eating all the vegetables that animals need to eat to get nice and fat so they can feed the children.

"Do it for the children!"