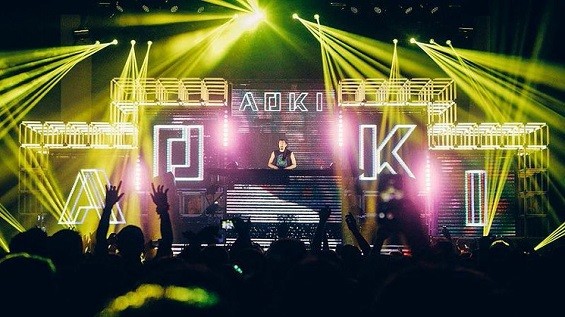 When Steve Aoki hits the Pageant on Monday, fans will have the chance to check out the DJ/producer's much-lauded new stage show, the "Neon Future Experience." At 50 feet wide, the monster set explodes with animation and LEDs that highlight Aoki's last name spelled out for the crowd.

See also: Steve Aoki on How His Gigs Are "About Gettin' Crazy and Going Wild," With or Without Cake

Aoki is no stranger to big productions. Back in 2009, when he landed his second Coachella gig, he wanted more than the standard DJ booth. He bought rafts and Supersoakers and hit up thrift stores to get brightly colored fabric that he and his pals could turn into cloaks. Then he commissioned an artist to make large boxes that lit up. "I spent more money than my guarantee," Aoki recalls.

But the expense worked out for the DJ. Photos of him riding a raft above the crowd made it into press coverage of the event and spread online. Kanye West mentioned the raft to Aoki. It's fair to say that this event helped catapult Aoki into the upper echelons of EDM superstardom.

As Aoki's reputation increased, stagecraft became more important to his live show. In 2011 he joined the Identity Festival. Because this was a large-scale tour and Aoki was about ready to release his album, Wonderland, he decided to go all out on the production.

"That was the first time where I spent six figures in developing those Aoki letters," he says. Since then, the stages have grown even more elaborate.

For V Squared, there were a few issues to take into consideration with the project. The biggest one is that Aoki's tour will take him to venues of varying sizes. For designer Amanda Hamilton, the challenge was to create a set that could swell and shrink depending on the size of the stage itself. The "Neon Future Experience" can go as large as 50 feet wide and as small as 30 feet wide.

"It was kind of like playing Legos with these grids," says Hamilton, "making sure that each piece could be reused for every venue."

The other issue is Aoki's stage style. He doesn't stay behind the gear. "We had to create a performance area," says Hamilton. In fact, they created four spaces for Aoki to jump around, get on the rafts and throw some cake.

For Aoki, finding harmony between the seriousness of his current work and the party vibe of EDM gatherings was key. "I want the themes and the environments to be based on Neon Future," he says, referring to his second studio album, released last September. "But, at the same time, have it balanced with this idea of being fun and not so intellectual, too."

Virkhaus found inspiration in a sci-fi fan favorite. He described his idea of the "Neon Future" as akin to "Neo-Tokyo," the setting for the anime Akira. "The Akira movie was always fascinating in the scale of it and how much devastation there was and how they came back and had a hopeful message at the end," he says. "That always resonated with me."

While rehearsing for the tour, which consists of live PA performances as opposed to DJ sets, Aoki and the team went through the songs to make sure that the visuals match up with the mood of the music. Aoki cites "Cake Face" as an example, noting that it will be accompanied by footage of his cake-throwing escapades from the past three years.

Aoki is quick to point out that the elaborate stages aren't necessary for dance music. "When you think of a deep-house DJ, you don't expect that DJ to have a huge production," he says. But for someone like Aoki, whose style is perhaps a bit more pop-minded, the big show works.

"Everyone is different," he says. "With my kind of music, because I've been consistently able to play in front of large, large crowds, I feel like I need to communicate to them constantly -- not just with the music, but with other things."