"I want this to be the place where old punk rockers come to die," says Steve "Doc" Dachroeden of his bar. When Dachroeden and his wife, Shelly, opened the Silver Ballroom nearly five years ago, it was designed around just a couple of key elements: pinball and punk rock. That's what they liked, so that's what they provided.

It's an unlikely business model that has found solid success in south city's Bevo Mill neighborhood. Since opening in April 2010, the Silver Ballroom has become an internationally renowned destination spot for pinball enthusiasts and a home away from home for St. Louis musicians looking to unwind. Patrons are drawn to the flashing lights of the arcade-style setup and the sounds of the games dinging beneath the blast of classic punk rock provided by a carefully stocked jukebox. 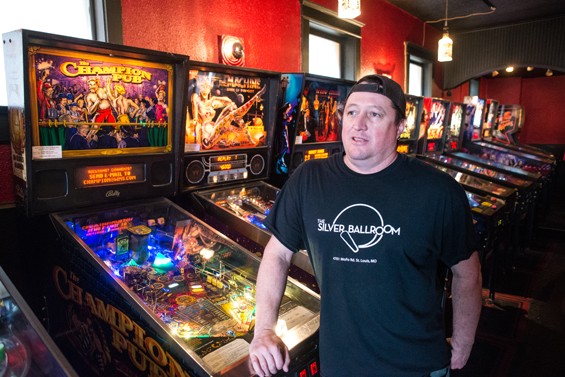 The jukebox selection is a well-earned point of pride for Dachroeden. It's loaded with classic punk albums and selections from local bands including Nineteen, 7 Shot Screamers and the Humanoids.

"If you're going to have a real punk-rock bar, there's no Blink-182 in the jukebox," he says. "When the jukebox stops, nothing comes on. Not the radio or anything. It's punk rock or nothing. No Nelly songs on after the Dead Kennedys or anything like that."

It's a musical place, and not just because of the jukebox. Dachroeden's connection to the music scene goes back much further than the existence of the bar. In addition to drumming for the UnMutuals, Dachroeden has played in fifteen or so bands since moving to St. Louis from Australia in 1987. He also spent years as the "artist relations guy" at instrument distributor St. Louis Music, specializing in Ampeg amplifiers and Alvarez guitars.

Doc mentions, almost offhandedly, that he'd "have to do things like fly to AC/DC's rehearsal and make their practice sound good."

Tim Jamison, singer of St. Louis' long-running punk band Ultraman, met Dachroeden many years ago while filming an episode of Critical Mass, a late '80s public-access show not unlike a smarter, St. Louis-based version of Wayne's World. His favorite aspect of the Silver Ballroom is the inclusion of historic concert fliers, displayed on the actual bar itself. 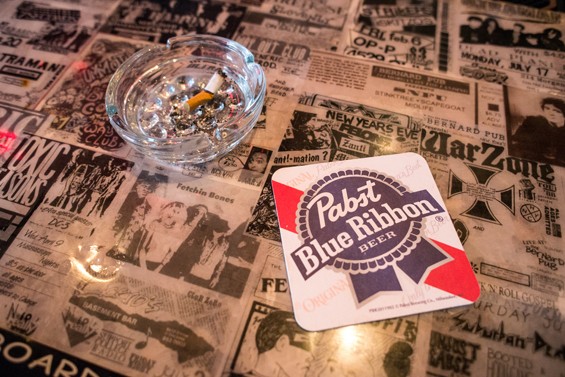 "The coolest thing about them is that they're a totally lost art form," Jamison explains as he taps a flier near the far corner of the bar.

The flier is for Scream, Dave Grohl's punk band from the 1980s. It triggers a hilarious story from Jamison, who explains that the show was canceled, rescheduled for a different location and then shut down during sound check, with the bands eventually bailing on the whole thing and hitting a house party instead. A different flier for a Minutemen show at Mississippi Nights has Jamison recalling that the raucous event occurred just a month before the death of Minutemen vocalist D. Boon, with five "hoosier bands" opening the show and fistfights breaking out all night.

"At Bernard Pub the threat was being mugged," Jamison explains. "At Turner's it was getting beat up just for being a punk rocker." 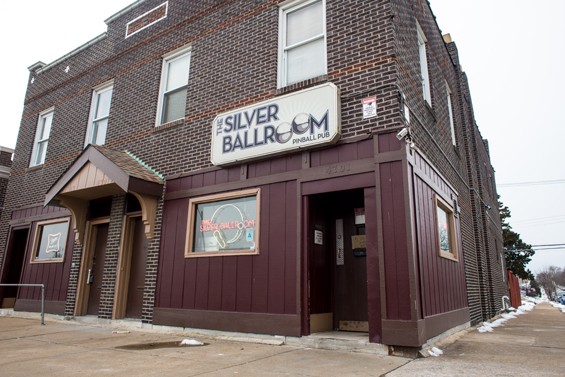 Punk rockers are still taking hits, as the Silver Ballroom and its patrons found out last month. On January 12 local musician Joe Manwarren was the victim of an attempted robbery as he left the bar and began walking to his car. Manwarren was shot in both the hand and the leg before he was able to run back inside for safety. The bar provided security-camera footage to the police, but so far no arrests have been made.

Manwarren says he feels lucky, not just for surviving the harrowing ordeal, but also because the incident happened near a place where he feels safe and has some "amazing friends." In addition to installing extra outdoor lights for security, Dachroeden is hosting a pinball tournament on March 1 to assist Manwarren with his medical expenses. He is also in the final stages of inking a deal with the city to purchase a nearby parking lot, providing another well-lit place for patrons to park.

Despite this senseless act of random violence, the Silver Ballroom has a reputation as one of the friendliest, most welcoming establishments in the city. Dachroeden smiles proudly as he boasts that his place hasn't even had one bar fight in its entire five-year history. And in many ways the Silver Ballroom illustrates how a noisy little corner bar can help to anchor a whole neighborhood. He keeps an eye out for his neighbors, and his neighbors keep an eye out for him.

Each day at the Silver Ballroom a staff member updates a wipe board that hangs inside the front door. On it is a list of shows happening that night. It's an odd move for a bar to highlight what's going on at other bars -- basically encouraging its customers to walk right back out its door -- but it's that type of spirit and consistent dedication to the community that keeps the patrons coming back. They know that customers will return after the show and tell their tales. They'll make new connections and form new bands. And then it will cycle again.