The Grateful Dead's Journey Is Far From Over 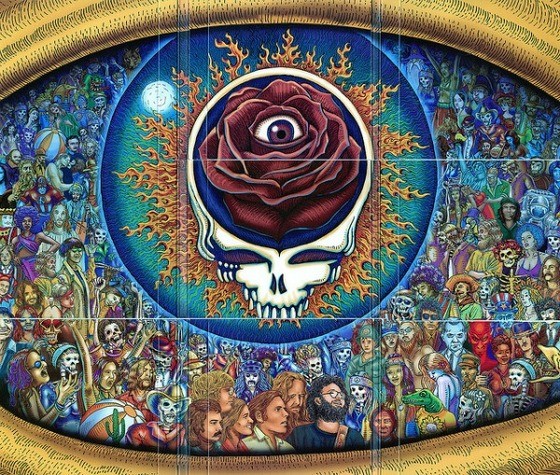 No Simple Highway: A Cultural History of the Grateful Dead By Peter Richardson St. Martin's, 384 pp., $26.99

With 2015 marking the 50th anniversary of its formation, expect a lot of attention paid this year to the musical and cultural legacy of the Grateful Dead. The four surviving members of the classic lineup (Bob Weir, Phil Lesh, Bill Kreutzmann and Mickey Hart) have announced a "that's all, folks!" series of final shows under the banner of "Fare Thee Well" July 3-5 at Chicago's Soldier Field.

According to a published report, the band has already received requests for 350,000 tickets even though the capacity for all shows is just under 200,000 -- and that's just from the group's in-house mail-order service. Phish's Trey Anastasio will fill in on guitar and vocals for the late Jerry Garcia, and Jeff Chimenti (keyboards) and previous Dead compatriot Bruce Hornsby (piano) will augment the lineup.

Author Peter Richardson's No Simple Highway mainly looks and the musical, social and political influences that surrounded the group, as well as its own unique models of traveling, touring and community which developed (and were not always successful) over the course of decades.

Not surprisingly, the band's origins in the communities of Haight-Ashbury and later Marin County had a lot to do with its outlook and then-unorthodox practices. Richardson touches on the tribalism, youth culture, sonic and pharmaceutical experimentation, and back-to-nature aesthetics found therein.

That may sound like a very dry and college-thesis-like summation, but Richardson's writing style about both the band (with side trips on the greater U.S. culture and happenings at the time) flows extremely well.

While the Dead had no declared leader, the public face and responsibilities of steering the ship naturally fell on singer/guitarist Jerry Garcia, a reluctant helmsmen if ever there was one. At times beatific, exploratory and self-destructive, he likened the band's appeal to licorice: Not everyone liked it, but those who did really did.

And, as a band that always put more emphasis and passion into the stage than the studio, he was also a father figure to millions of "Deadheads" over the years -- whether one attended one show and was somehow changed, or those who structured their whole lives around the band's activities.

"It would be nice if rock shows could approach revival meetings," Garcia told an interviewer in 1973. "Which happens occasionally when the music is good."

Some of Richardson's best observations and writing are about the Dead's practically shocking level of mass success toward the end of its career.

This outsider band finally notched a Top 10 single 22 years into its career (1987's "Touch of Grey"), which ballooned interest in the group. However, the Grateful Dead's success was often more for the spectacle of the shows and its followers' customs and practices than the music.

The song's accompanying video, in which the track is performed mostly by skeletal doppelgangers of group members, was an unexpected MTV hit. And yes, Richardson writes, they used actual human skeletons ordered from a medical-supply service.

The irony of the ultimate hippie band finding its greatest popularity in the Reagan/Bush years is not lost on the author. In 1991, the Grateful Dead was the largest-grossing rock band in the United States.

Jerry Garcia died in 1995 at age 53 from a heart attack while in residence at a drug rehab facility, another effort to try and stem years of cocaine and heroin abuse and addiction. And while members have recorded and toured in various combinations as the Other Ones, Further and the Dead in addition to solo bands and projects, as a unit the Grateful Dead died with its core spirit, Jerry Garcia -- though he lives on in the sound systems and around the neck of millions.

No Simple Highway more than serves its goal of looking at the Grateful Dead as not just a rock & roll, but a cultural institution with some insight. And while the band's story has indeed been a long, strange trip, it wasn't one taken in isolation.