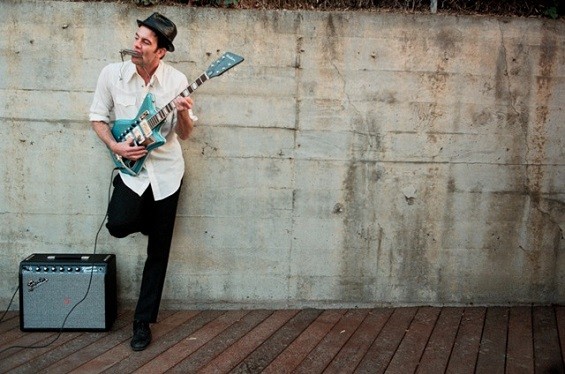 The life of Garrett Dutton -- better known as G. Love -- has been one long musical journey. It began when he was eight years old, when his mom first placed a guitar in his hands.

"I found myself through songwriting at a young age," he says. "I found this form of expression that was really pure and true."

After years spent plugging away and writing songs, Dutton became a street musician in his hometown of Philadelphia and found the element that would really allow his brand of blues to stand out: hip-hop.

"It was the best night of my whole street-music career. I made like sixty bucks, two beers and a joint, and I was feeling no pain," he says. "It was toward the end of the night and I was riffing on the end of one of my blues-based tunes, and I started rapping the lyrics for Eric B. & Rakim's 'Paid in Full' over this groove I was laying down.... It was one of those big epiphanies of my life. I knew at that moment that I was like the only kid rapping and playing a Dobro out on the street."

In 1992, G. Love traded Boston for Philly. His hometown wasn't too kind to street musicians. In Philadelphia, you could get ejected by the cops at any time, especially if it was a busy night on the street -- precisely when you'd want to be out there -- but in Boston, you could get a permit to play. Boston seemed like the better option; Dutton moved, got a part-time gig and continued to hone his craft. He met his drummer Jeff Clemens by chance after a show at a bar. Jeff later brought Jim Prescott into the mix, and the three became G. Love & Special Sauce.

After experiencing a pretty rapid snowball effect -- the trio quickly became one of the biggest bands in Boston -- the group landed a deal with Epic Records in 1993.

"We got the call from this guy who was managing us and he was like, 'We got the deal from Epic Records,'" Dutton recalls. "I started crying -- it was just unbelievable; it was such a mix of emotions. We had been having this amazing run going from street musicians to one of the top bands on the local Boston scene, which was huge. Just this groundswell of energy.

"I was crying because I had achieved my dream of my life, my life's goal," he adds. "I was twenty years old, and I was also crying because I knew that I didn't know what was going to happen, but I knew that nothing was ever going to be the same. It scared the shit out of me and excited me at the same time."

Twenty years later and Dutton's career -- both solo and with the band -- is still going strong. Over the years, his group has taken some breaks and gotten back together; last January, the original three members announced that they were reuniting, just months before they were slated to release their most recent project, Sugar.

"I think our new record has been really great for us to look back, but push forward. It's heavy with the blues and heavy with the hip-hop influence, although it's more blues influence," he says.

Overall, Sugar is a meditation on the dream of performing music professionally. "It's like the more success you have as a musician, the harder it is on your family and personal life because the more you work, the longer you're away from your loved ones. You always kind of miss home," he says.

G. Love & Special Sauce is constantly touring. For Dutton, performing live has been key for his career, bringing a kind of euphoria that has become addictive for him. He regularly tours with the band but goes on solo acoustic tours as well, allowing him to express different sides of himself as a musician. He finds that there is more freedom as a solo performer, but he also enjoys touring with his bandmates and being part of something larger.

Though he's lived his dream as a successful musician, his career hasn't been without mistakes. He recognizes that one of his biggest errors was rushing to record his second album Coast to Coast Motel, both because he wasn't happy with his band's debut G. Love and Special Sauce and because he felt passed up by hip-hop.

"Once we hit the scene, because of the hip-hop and the blues influence, and us being three white kids, and me being twenty years old, everybody wanted to be like, 'Oh, how can you be a rapper?' Or, 'How can you play the blues?' We kind of turned our back on the thing that made us sticky in the first place, and took the hip-hop out of it and did a real blues kind of record."

The band's second album abandoned the original blueprint that Dutton had created, taking a more blues-influenced route instead. Regardless, he takes his mistakes in stride -- there's a lot he's learned over the course of his twenty-year music career, especially since he grew up on the road.

"I wish I could tell myself to really learn how to play the game, and find the balance between like working the music business and playing it as a game, and keeping your soul and your music true," he says. "Every opportunity presents a number of different outcomes -- nowadays when I go on stage or play a festival, or go out to an event or sit alone in my room and practice, I try and really think about the big picture: What can we achieve from this situation? I think that's important."