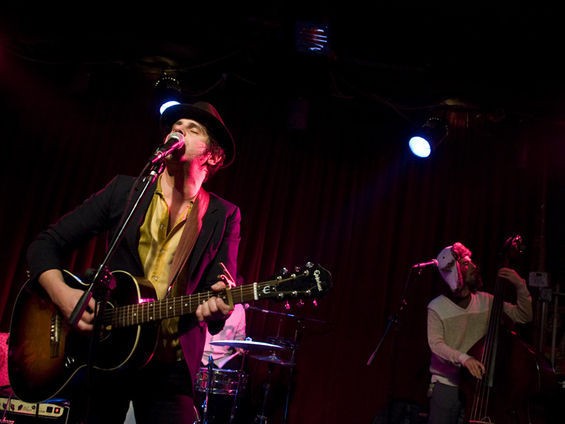 Why don't we just cram Mardi Gras and Valentine's Day into a blender and pour it out on some unsuspecting Saturday in February? Good thinking, St. Louis. Hate to put a damper on your date ahead, but designate a driver -- this is the night our city becomes submerged in a sea of beads and beer. For those hoping to find love, try our Soulard Mardi Gras/Valentine's Day Board Game, the Birds and the Beads. This might give a little insight about what you're getting yourself into before ever leaving the house. For those undeterred and still willing to brave the streets, we've assembled a handy concert guide for Saturday night. Whether you want to avoid Soulard or not, we can help.

Jason Isbell w/ Damien Jurado Saturday, February 14 Peabody Opera House 8 p.m. | $35-$45 The former Drive-By Trucker explores themes of self-destruction and regeneration with a sound sculpted by his own sordid past. The singer-songwriter rings a deeply personal tone with his own brand of Americana. Read more about Jason Isbell in this recent interview posted yesterday on RFT Music.

The Beach Boys Saturday, February 14 Lindenwood's J. Scheidegger Center for the Arts 8 p.m. | $49.50-$79.50 Recently reunited with original lead singer Mike Love, the Beach Boys plays all the hits you might expect alongside rare cuts. The band is all smiles and sunshine, and really, what better soundtrack to a cold, frigid day in February? For immediate vibes, check out the band's latest music video up above.

Follow through for part 2 of our Valentine's Day concert guide. G. Love & Special Sauce w/ Matt Costa Saturday, February 14 The Pageant 8 p.m. | $22.50-$25 From our monthly hip-hop column, penned by Tara Mahadevan: G. Love & Special Sauce beautifully straddles the line between rap, funk, blues and R&B. And the band -- with frontman Garrett Dutton, drummer Jeffrey Clemens and bassist Jim Prescott -- is able to maintain its alternative hip-hop sound while covering myriad subjects, including beverages, cereal, love and rodeo clowns. As a member of the band and as a soloist, Dutton is able to careen between alt rap, folk and indie rock with precision: In 2011, he released a collaborative album with the Avett Brothers. In 2014, the original G. Love & Special Sauce trio got back together and recorded Sugar, with a few throwbacks.

The Schwag Saturday, February 14 2720 Cherokee Performing Arts Center 9 p.m. | $10 Jimmy Tebeau and company are practically jam-band royalty, thanks to their own take on the Grateful Dead experience. The Schwag has its own brand of psychedelic tangents and could, in all fairness, call itself an original band. By wearing the Dead on its sleeve, the group pays tribute but never comes off as "just a cover band."

Downtown Brown w/ Fungonewrong, Outcome of Betrayal, Snooty and the Ratfinks Saturday, February 14 The Firebird 7:30 p.m. | $10-$12 While rap rock gets a bad, well, rap, Downtown Brown takes to the genre with a wink and a nod. Clever hooks take the lead, but the group doesn't shy on shock value, nor does it overuse those age-old cliches. If your date proudly doesn't "give a fuck," take them here. Snobs, stay away.

Langhorne Slim w/ Cory Chisel Saturday, February 14 Off Broadway 9 p.m. | $15/$18 Langhorne Slim always seems to visit right around Valentine's Day. Here's what Roy Kasten had to say in 2009 (from the RFT Music archives): Our hero made his first impression on St. Louis while opening for Clem Snide at the Duck Room in the spring of 2005. Derby-wearing Sean Scolnick (a.k.a., Langhorne Slim) beat on an acoustic guitar and, drunk off his skinny white ass, rambled and meandered and refused to get off the stage. (Our indie-rock kingdom for a rail, dreamt a polite audience, just to run him out of town and back to Brooklyn.) Since then, Slim has redeemed himself with a killer, Dylan-as-rockabilly self-titled album in 2008, and last year's bubbly, gospel-conscious, folk-pop suite, Be Set Free. It's the kind of record so many scruffy songster punks aspire to make -- but one that's out of reach for most because they lack the native charisma, charm and tunes that make life worth living and affirming. All things, naturally, our hero believes and communicates so well.

Skeet Rodgers & Inner City Blues w/ Al Holliday and the East Side Rhythm Band, Big Mike and the Blue City All-Stars, Jeremiah Johnson Band, Roland Johnson Saturday, February 14 Beale on Broadway Noon | $7 Beale On Broadway celebrates Mardi Gras with stellar blues bands featured across thirteen hours of music. Obviously, people are meant to stop in throughout the day, but technically you and yours could stick around like crazed blues fanatics. We recommended getting out and seeing some sights with your sounds. Plus, beads. Do you know what people do for beads?

Vernacular String Trio w/ Dizzy Atmosphere, May Day Orchestra Saturday, February 14 Schlafly Tap Room 9 p.m. | free Consider this: Your significant other (or potential partner) doesn't have an ear for free jazz. You call it "high art," they call it "extremely irritating." So trick them. Vernacular String Trio sits sandwiched between Dizzy Atmosphere's subtle swing and May Day Orchestra's jagged folk rock. The Schlafly Tap Room fits the kind of romantic mood you'd want on Valentine's Day, and the show's free. Who doesn't like a cheap date? No one you want to be with, anyway.