Atomic Cowboy Expands With the Bootleg, the Grove's Newest Venue 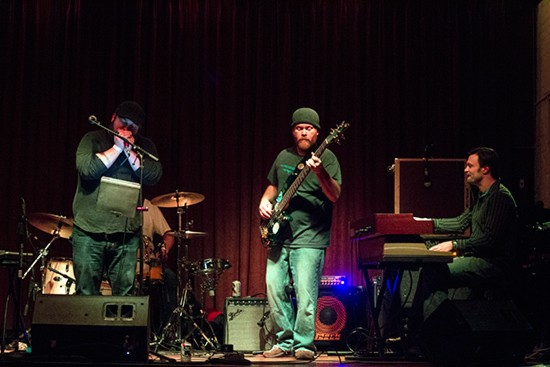 For nearly a decade, the site at 4140 Manchester Avenue has been in flux. The space has had many names -- Novak's, the Spot, Foxhole and, most recently, the Demo. Last Friday, the room reopened as the Bootleg at Atomic Cowboy, the latest addition to the Grove's growing list of concert venues.

"We used to surprise people. We used to enjoy being spontaneous, and we did that right in the midst of our restaurant. Nowadays, we want people to know what they're going to get when they walk through the door," says Atomic Cowboy owner Chip Schloss.

The Bootleg is much more than a name. It's an entertainment brand that physically wraps around the Atomic Cowboy restaurant. From the outdoor stage and patio to the indoor bar and restaurant, the whole complex has the potential to host two shows while still catering to the bar and dinner crowd.

"If you're in the Grove on a Friday night, it almost looks like the Loop, in terms of people walking up and down the street. With live music venues, late night bars, restaurants -- it's booming. We decided that it's time to up our game," he says.

When the Gramophone announced its plans to stop hosting music (to focus on food and drink), Schloss saw the opportunity to collaborate. Walking inside the Bootleg, it's hard not to feel hints of déjà vu. The Gramophone's lighting and sound system have been moved over along with its signature stage curtain -- which matches the Bootleg's new décor. Most notable is the solid hardwood floor, reclaimed from homes in the Grove and on the Hill.

"It's a casual scenario. Gramophone's Matt Keune came down to the Bootleg as our house tech as well. From that standpoint, it's very much a collaboration," says Schloss.

Drew Jameson, who was talent buying alongside Roo Yawitz at the Gramophone, has signed on at Atomic Cowboy and the Bootleg. And while Yawitz has taken his own venue off the circuit for touring acts, he will likely be presenting shows at the new space. "It won't be as rigorous for Roo as before. He can cherry-pick and just do shows he feels very passionate about. It's informal," he adds.

While the Bootleg technically opened last week, it's what they call a soft opening. That is, the show schedule for this month is lighter while the venue gets all the kinks worked out. The grand opening is planned for the weekend of March 5 through 7, with performances by Lincoln Durham, Webb Wilder and Horseshoes & Hand Grenades.

"It feels like we have the ability to be as good, if not better, a concert experience as the Gramophone," says Schloss.

Follow through for a look at the newly renovated room with shots from the soft opening on February 6.