The 57th Annual Grammy Awards came and went this weekend, and among the hobnobbing and gift-bag-grabbing and other general music-industry handjobbery -- not to mention that well-deserved award taken home by our local symphony -- were repeated references to Ferguson, the #BlackLivesMatter movement and the iconic "Hands up; don't shoot" gesture that has become its symbol.

Three performances in particular made overt nods to the cause:

Beyonce's rendition of "Take My Hand, Precious Lord," from the Selma soundtrack, featured the singer surrounded by her backup dancers, who slowly raised their hands, palms facing out, near the beginning of the song (pictured above). 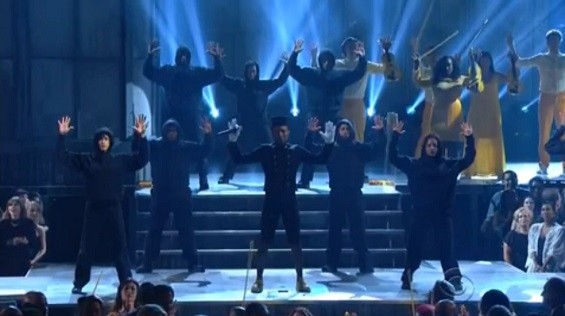 The opening portion of Pharrell's "Happy" was presented in a darker and far more morose fashion than might be expected from such an upbeat song. His backup dancers were all dressed in black hooded sweatshirts -- a nod to the late Trayvon Martin -- and they and Williams all together threw their hands toward the sky in the "Hands up" pose just before the song kicked into its chorus. An unexpected piano break that preceded drew everyone's attention to the gesture, just before the song broke back into its infectious melody.

The result was jarring and poignant, and a fascinating juxtaposition to the song's everything-is-great-hey-let's-dance modus operandi. 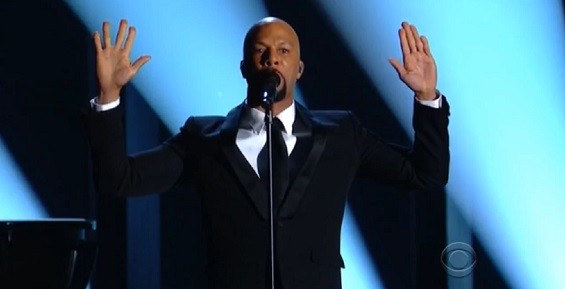 Common and John Legend showed their support for the #BlackLivesMatter movement as well, performing their song "Glory," which also appeared on the soundtrack from Selma. The lyrics mention Ferguson specifically:

That's why we walk through Ferguson with our hands up
When it go down we woman and man up
They say, "Stay down", and we stand up
Shots, we on the ground, the camera panned up
King pointed to the mountain top and we ran up

At this point in the song, naturally, Common raised his hands to the air.

Driving the point home, no less than Prince, the Purple One himself, even referenced the movement while presenting the award for Album of the Year.

Who could dare argue with Prince? Sit down, naysayers; grown-ups are talking.