The 10 Best Concerts in St. Louis This Weekend: February 6 to 8 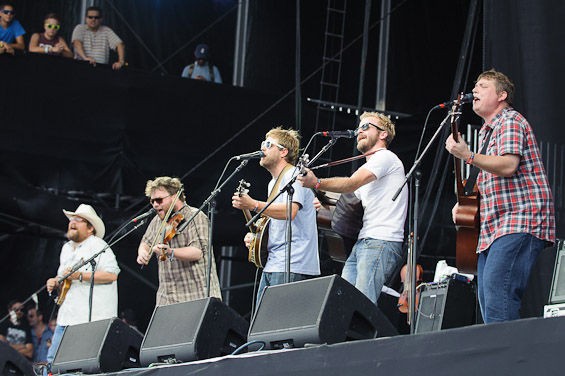 When Purina brought out The Bacon Brothers for its 2013 Beggin' Pet Parade, they kind of blew any chance of topping themselves. Sure this year we have Blues Traveler, and by all means that's a much better band musically, but we want Kevin Bacon back and slinging our (dog's) favorite bacon snacks. They're made with real meat, sort of. Riff Raff would have no problem tearing through them with his $21,000 shark tooth grill. Don't know Riff Raff? Do not pass go, do not collect $200. In fact, go straight to internet jail. He's probably the most viral dude on the whole damn web, but can he rap? You be the judge.

See also: -Riff Raff to Bring Shark Grills and Neon Clothes to the Ready Room -Sine Nomine To Perform Final Show With Interim Guitarist -The CharFlies to Release Linoleum Angel This Friday at Off Broadway

CharFlies Album Release Show w/ Cree Rider Family Band, the Defeated County Friday, February 6 Off Broadway 8 p.m. | $8 Be sure to check out our review of the CharFlies' new album, wherein RFT Music writer Christian Schaffer says, "The band playfully calls its music 'junk-folk,' and while there are some loose moments and purposefully rudimentary percussion, the instrumentalists craft more than passable strains of bluegrass and folk." (DH)

Foam Benefit Show w/ Golden Curls, Whiskey Ginger, John Krane, Eric Hall, Hands and Feet, The Fog Lights, Zak M, Kid Scientist Friday, February 6 Foam Coffee & Beer 5 p.m. | $5 Local musician Mic Boshans never dreamed of owning a coffee shop, much less a music venue. But when Foam's former owner Mike Glodeck decided to close up shop Boshans swooped in to save the burgeoning venue. In only two months, Foam has become one of the busiest bars on Cherokee Street, hosting comedy nights, open-mics and, most frequently, live music. When the spot's P.A. was swiped last month, the music scene responded in kind by pulling together a quick benefit show to not only replace the stolen gear, but to supply the stage with an even better sound system than before. The line-up ranges from ambient acts like Eric Hall and Golden Curls to the colorful indie rock of Kid Scientist. Of special note on this show is Hands and Feet, a veritable one man band who just released one of our favorite records in recent memory. (JH)

Leo Kottke Friday, February 6 The Sheldon 8 p.m. | $40/$45 The world's greatest living partially deaf guitarist, Leo Kottke, hears what he needs to hear and plays what he needs to play. His second album, simply called 6- and 12-String Guitar, was released in 1969 and recorded in less than four hours. The album changed guitar playing forever. (RK)

Rusted Skin Reunion Show w/ Sine Nomine, As Earth Shatters, Wings of the Morning Friday, February 6 The Firebird 7:30 p.m. | $8-$10 Prog-metal tends to be a sub-class of sound reserved for the snootiest sect of metal fans, but Rusted Skin pushes pretense aside for its own primal style. Sure, the band brings more riffs in a single song than most bands do through entire albums, but every note counts. Sine Nomine, on the other hand, takes on metalcore with a fearless use of sparse and minimal riffs. The band makes use of contrast to stark effect, crafting a dark but deeply heavy set of songs. This night is your last chance to see either band -- a bittersweet footnote to an otherwise stellar show. (JH)

Trampled By Turtles w/ Charlie Parr and the Lowest Pair Friday, February 6 The Pageant 8 p.m. | $20-$25 Trampled by Turtles harkens back to a time where traveling troupes plucked strings with some air of mystery -- musical gypsies that planted the roots of true Americana across the country. Now over than a decade old, Trampled by Turtles just hit its stride with last year's Wild Animals, a record that pays respect to tradition but is never held back by it. (JH)

Enabler w/ Call of the Void, Everything Went Black, Path of Might Saturday, February 7 The Demo 8:30 p.m. | $10-$13 It would be a huge mistake to write off Enabler as "that band that the drummer of Fall Out Boy was in a while ago." One, because you aren't going to find a more proficient hybrid of Converge and Tragedy in the Midwest, and two, because Andy Hurley hasn't been involved with the band for a long time. Yes, two or three years is an eternity in band/tour years. (JE)

Jim Lauderdale Saturday, February 7 Off Broadway 8 p.m. | $20/$25 As often happens in Music City, USA, you can be Nashville-famous but a relative unknown outside of the 615 area code. Singer and songwriter Jim Lauderdale has been a revered talent among country music fans throughout much of his 30-year career, working with country, bluegrass and rock & roll circles but retaining his dignified, twangy charms regardless of the medium. (CS)

Zak Marmalefsky Tape Release Show w/ Jack Toft, Little Cake, Demonlover Saturday, February 7 CBGB 9:30 p.m. | free The music of Zak Marmalefsky is simultaneously of this age and not of this world. With a finger-plucked guitar and a clutch of heartbroken but witty songs, Marmalefsky conjures Depression-era street corners and speakeasys, where his rich, sincere baritone crooning might have once made him king of the minstrels for a day. For now, he'll settle for an air of folk-troubadour mystery. Following in the footsteps of Leadbelly and Dave Van Ronk isn't for the faint of skill or heart; Marmalefsky has both. His music - sometimes poignant, sometimes off-color, often both at the same time - is never a throwback put-on. (RK)

Blues Traveler Sunday, February 8 Soulard Neighborhood 2 p.m. | free Before you try to argue with me that Blues Traveler is some kind of novelty or flash-in-the-pan, consider this: John Hopper is a harmonica virtuoso -- the Hendrix of the instrument, if you will. Harmonica manufacturer Hohner even has listed him as a "featured artist" -- a distinction reserved only for the finest. And remember that song "Hook"? That song trolled you so hard and so brilliantly, you didn't even know you were being trolled. If that's not enough, remember that time he modified his truck so that he could carry shitloads and shitloads of guns in its secret compartments? Show some respect, or it's YOUR ass. (DH)