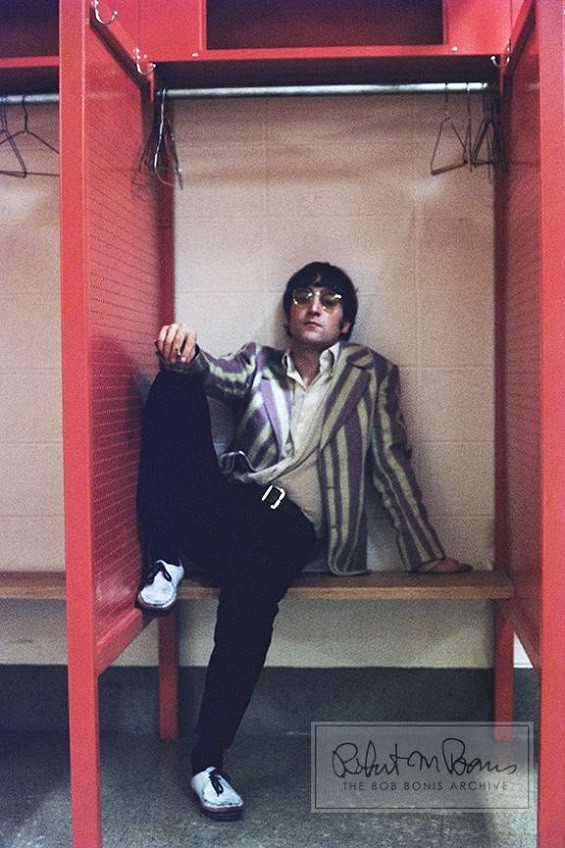 This rare photo of John Lennon, shot in the bowels of Busch Stadium during the Beatles' August 21, 1966 stop in St. Louis, was recently unearthed and made available for purchase on eBay on Monday. The photo is from a larger collection of the work of the late Bob Bonis, who served as tour manager for both the Fab Four and the Rolling Stones in the mid-sixties.

Bonis passed away in 1992, and now his collection of candid photographs is controlled by a hedge-fund investor named Kurt Benjamin, who is selling prints on eBay with a starting price of $175 for an 11" x 14" photo.

See also: Here Is the Setlist from the Beatles' 1966 Concert at Busch Stadium

"Kurt wanted to open the field for people to have the opportunity to own rare, limited-edition art," according to an eBay spokeswoman. "He wanted to create an environment that made it cost-effective."

A lengthy caption describing the photo tells the tale:

Amidst hangers and locker cubbies, John Lennon lounges backstage before the Beatles' show at Busch Memorial Stadium in St. Louis, Missouri, on August 21, 1966. These few moments of peace turned out to be fleeting, as once the Beatles took the stage, they were pummeled with a downpour. Though the venue had constructed a makeshift shelter out of slivers of corrugated iron, rain still dripped on the amps and created a downright soggy attitude in the band. Paul McCartney called the show "worse than those early days" at the Cavern Club, one of the very reasons he finally agreed with the others to stop touring forever. So the 23,000 fans in attendance were amongst the last to see The Beatles on tour as they played only four more shows before retiring from touring and live performances, although London guests at the January 30, 1969, rooftop show at Apple Records headquarters have the distinction of being the last to ever see the fab four perform live.

So the Beatles' sole appearance in St. Louis took place just days before the band stopped touring altogether. The eleven-song setlist featured some of the group's most enduring hits:

Below, watch a video of Bob Santelli, executive director of the Grammy Museum, as he talks about the Bob Bonis Archive: