The McCarthy Music Illuminated Piano: A Shortcut to Keyboard Stardom?

If you've ever seen Casablanca, you remember Sam the piano player. His fingers would glide over the keys as he simultaneously carried on a conversation with Ilsa, scanned the room for his boss, or sang, rarely needing to even look down at his hands as he kept the whole room entertained.

In reality, actor Dooley Wilson, who portrayed Sam, couldn't even play the piano. He sang while mimicking the movements of pianist Elliot Carpenter, who was likely focused on the work of playing the tunes.

But the fantasy of playing the piano with ease remains a seductive one. The latest product designed to capitalize on this daydream is the McCarthy Music Illuminating Piano, shown last week at the NAMM (National Association of Music Merchants) trade show in Anaheim, California.

The Illuminating Piano has keys that light up, showing you which key to put your finger on next -- left hand blue, right hand pink. The 61-key piano is designed to be used with an iPad, which plugs in to the keyboard, displaying sheet music and circled notes that coordinate with the lighted keys. When you make a mistake, a red mark appears on the score, so you can go back and practice that part again.

It's an enticing idea: The piano shows you what to do, and you follow the lighted keys as easily as a singer could follow a karaoke video or a gamer could follow Guitar Hero. But while the McCarthy Piano might be fun to play with, it occupies a space just a notch or so above a toy -- not likely to produce any serious pianists.

The hard reality is that piano is one of the most complex instruments there is to master, and unlike folk instruments such as guitar, impossible to learn to any serious degree of competence without some amount of formal instruction.

McCarthy Music has partnered with music publisher Hal Leonard to make 1,000 titles available for the Illuminated Piano, predominantly in the pop realm (there are plenty of songs from the Frozen soundtrack) and a few classical pieces (like piano student workhorse "Fur Elise"). The keyboard has a "listen" mode, where it plays the song for you, and a "learn" mode, where the lighted keys guide you through the score. There's also an "assist" mode, where the piano plays one hand and you play the other.

"It's really a system that's designed to make learning to play piano really easy," says Kevin McCarthy, head of McCarthy music. "Lessons are fabulous, but the problem this solves is that when you get home, and have a piece of sheet music -- as a beginner, at least for me, it was a very lonely and frustrating experience. You spend half your time trying to find out where the notes on the piece of paper are on the keyboard. And so this allows you to really be playing and having fun in a very short order. And the more fun you have practicing, the more you'll practice."

It's a beguiling promise, the idea that piano practice might be "fun." But as someone who's been taking piano lessons for about six years, I can tell you that McCarthy Music's promised shortcut seems misplaced. Learning to figure out what those little black dots mean, to read them as fluidly as you can read the words in this article is no small feat, but it isn't the main part of the struggle.

Learning the notes of the treble clef, E-G-B-D-F, or "every good boy does fine" can happen in a matter of minutes. Learning to spot them quickly, at tempo, is a slower process, but still a basically simple one. The next step is learning where they are on the keyboard: the E is the one to the left of the two black keys. There, you've done it. Now, practice, and you'll be able to do it faster. 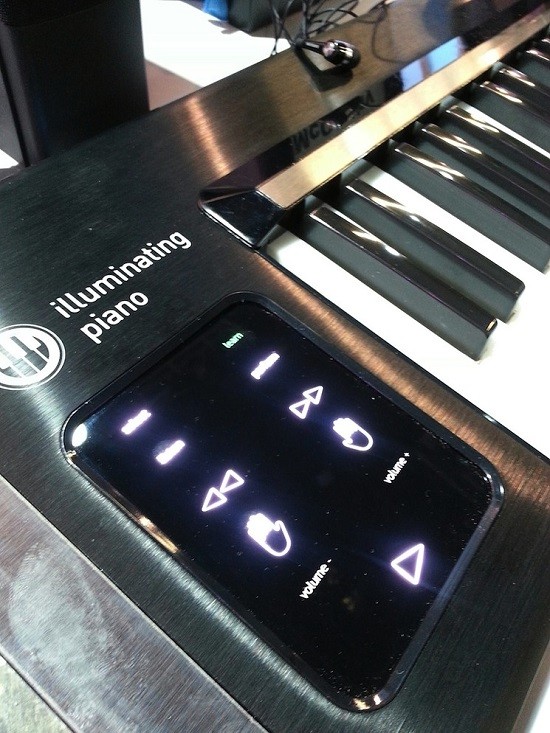 The real struggle of learning the piano is when, and where, and which finger. Where should your eyes be at this moment in the piece: on the left hand, right hand, or the music? Which finger hitting the next will best set you up to hit the one after that? What visual patterns should you be looking for? How should your forearms and wrists be moving? And what's the best way to transition from one chord to the next? And there are a million other subtleties after those.

The Illuminated Piano answers none of these questions, only telling the user which key to press next. Pick the "easy" version of a Beatles tune, practice enough, and you'll have the entertainment value of being able to play that tune in short order. But you'll likely be locked into the McCarthy system of learning, which, although it displays sheet music, is really geared toward skipping the reading part altogether.

Learning to read music is a bitch -- no doubt about it. But an even bigger bitch, long-run, would be having memorization as the only tool in your shed. Imagine teaching a child how to read not by connecting letters with sounds, but by asking them to memorize every single book they were interested in, word by word. It would definitely be fun for a while, and maybe even easier at the outset -- and this is in fact what many kids do when they're first learning how to read: they memorize and fake it. But to go on to higher-level work, reading isn't something that you can fudge your way around.

The Illuminating Piano is a fun toy, and at $499, plus $4.00 per song, it's far cheaper than years of piano lessons would be. But if you're just looking for short-term gratification, you might also want to consider choosing an easier instrument than piano.