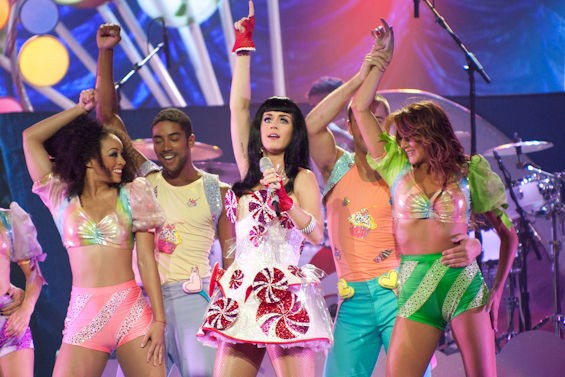 Look, we know that the recent round of pop stars infiltrating the Super Bowl halftime show has upset football purists who just want to see old white dudes play guitar. And, yeah, after what feels like a gazillion years of nothing but safe performances by Paul McCartney and Tom Petty, a butt-shaking, deliciously sweaty Bruno Mars might be a little overwhelming.

That's why Katy Perry was a genius when she combined pop princess hijinks with old-school nostalgia.

Oh, sure, Perry's halftime show for Super Bowl XLIX was plenty weird. Her songs lasted all of twenty seconds each, and her vocals weren't even that great, which, given her range, was a little disappointing. But by digging deep into her big pop-culture treasure chest for themes and showpieces, Perry found a way to keep bored bro types engaged while performing directly for her fanatical adorers -- especially during her grand entrance. Don't know what we mean? See if you recognize these nostalgic staples that Perry emulated:

Who wore it better? rt for will Ferrell, fav for katy Perry pic.twitter.com/euSIZ2aeUO

Perry's first of many costumes brought to mind Blades of Glory, the 2007 film that starred Will Ferrell and Jon Heder as the world's first-ever same-sex figure-skating pairs team. Perry's likeness to Ferrell's character as she performed "Roar" was admirable, but something about that flaming outfit made us hungry.

Katy Perry been trying to look like a flamin' hot cheeto since halloween pic.twitter.com/VcNFQeMO18

Not everyone gets a boner for cheese puffs, though (we don't understand you people), so Perry wisely pandered to the NASCAR crowd with her homage to stock car racer Jeff Gordon. See how Perry reached different audience sensibilities with just one outfit? Now think about how she entered the stage.

That's right, friends, Katy Perry rode into the stadium on a giant robot dog-lion thing. Did she name it Montecore like Peter Griffin of Family Guy did? Who knows. But she captured the nerd crowd with this and with...

Katy Perry wants to be Emboar so badpic.twitter.com/WQqIKNgOOO

Emboar, the pig-like Pokemon that fights with fire! Joy of joys, Perry's probably spent time in a basement with role-playing card games, just like us.

THAT'S FREAKING WHITE TIGERZORD! Katy had a Mighty Morphin power! Ok, her ride didn't go into full "warrior mode," but it did rear up while she made a "Rawwwrrr!" face like He-Man's arch-nemesis Skeletor. We're not going to lie -- we started crushing on Perry pretty hard once we realized what a giant nerd she was last night.

But the nostalgia trip didn't end with the opening number! No, Perry also held our attention during "Teenage Dream," when she had fun with balls.

We're just going to leave this here as food for thought.

Do you remember a cartoon from the '70s that featured a shark who talked like Curly from The Three Stooges and played in a band with a bunch of humans? Perry's Super Bowl performance of "Teenage Dream" was pretty much exactly that. This is the kind of legacy an animation career on LSD gets you, folks.

Other people -- mainly the younger viewers, bless their hearts -- thought this particular dance sequence looked more like a scene from 22 Jump Street. But really, don't all of Perry's shows look like this? We're not sure why the beach balls had sad eyes, though. Were they disappointed that they didn't get to see Perry's boobs?

Safety first! Maybe Perry has thrown a Wii remote through her TV while playing Wii Sports, so that's why she smartly added a strap to the microphone she used during "Firework." It's obvious she has plenty of Nintendo experience, because...

KIRBY! As Perry floated about the stadium with a star's help, we couldn't help but think of the pink, puffy-cheeked Nintendo character that literally inhales his enemies. Katy totally was riding around on a Warp Star here, folks.

THE MORE YOU KNOW

As we watched Perry fly under her shooting star during the big finale, we felt empowered. Inspired. Determined. And we kept hearing this damn xylophone chiming in our brain. WHAT ON EARTH? Oh, right, it's because Perry totally was copying "The More You Know," celebrity-driven public service announcements that were mega-popular on NBC in the '90s but have been pretty lame lately. Still, it kind of worked.

Because of this spectacle, would we put an end to bullying? Stand up to people who were trying to cheat on their pre-calc exams? End world hunger? Probably not. But for a few glorious moments, Katy Perry sure made us want to try.