The 10 Best Concerts in St. Louis This Weekend: January 30 to February 1 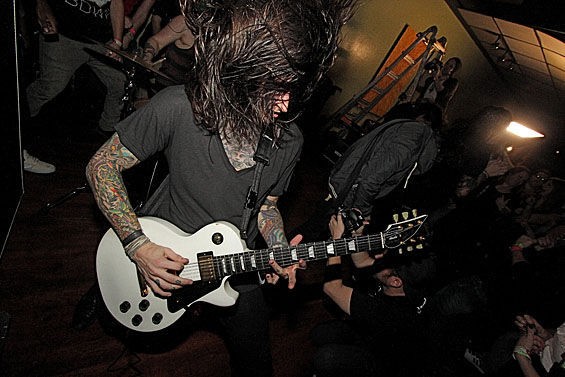 When RFT Music contributor Drew Ailes penned "Six Reasons Musicians Don't Deserve To Get Paid," I don't think he expected such a torrent of angry comments. There's more to the piece than the headline suggests, but this is the Internet and, more often than not, people respond to the title rather than the content therein. Actions speak louder than the comments section of your favorite alt-weekly paper, so go out and support live music and make sure the artists get paid. With album-release shows from Better Days, Tear Out the Heart and Sarah Jane & the Blue Notes, this weekend offers up a healthy dose of jazz, punk and more. Fans of ambient and avant-garde should check out the kick-off show for Bruxism, a collaboration between Foam and local sound artist Nathan Cook.

Keb' Mo' Friday, January 30 The Sheldon 7 p.m. | $40-$45 Kevin Roosevelt Moore, better known as Keb' Mo', has been singing the blues for four decades, and has racked up three Grammy wins at this point. This review from Wednesday night's show in Kentucky tells the tale of Moore's work today -- less traditional blues, more Americana and pop influences. Oh, also, "Put your clothes back on, baby. We're going to the mall." (DH)

"Thrash of the Titans" Classic Metal Cover Night w/ Rat Salad, Holy Smoke, Murderhead, Manifest Friday, January 30 Cusumano's 8 p.m. | $5 This should be fun -- members of some of St. Louis' best metal bands, alongside a few KC folks thrown in for good measure, will cover the likes of Black Sabbath, Iron Maiden, Motorhead, Megadeth and Metallica. An Under Cover Weekend for metalheads? (DH)

2015 Slumfest Hip-Hop Awards Show Saturday, January 31 2720 Cherokee Performing Arts Center 8 p.m. | $10 St. Louis' annual hip-hop awards is back with its latest round of artists, DJs, Bboys, Bgirls and producers from the past year. As per usual, the show will also feature live performances from local musicians and artists between award nominations. Last year's show was at Plush (RIP) -- but this year's Slumfest is being held at the incomparable 2720 Cherokee. (TM)

Basement Family w/ Men Working In Trees, Dad Jr., Bug Chaser, Shitstorm Saturday, January 31 Livery Company 8 p.m. | free Basement Family comes from Chicago to play the first, well, basement show at the new Livery location. Seasoned music fans might remember the space when it was called Radio Cherokee, but the brains behind the Livery Company have transformed the bar into a hipster-chic watering hole. Five bands in a cramped basement? Don't show up fashionably late -- secure your spot up front, or you'll have a grand time rocking out to the back of someone's head all night. (JH)

Tear Out the Heart Release Show Saturday, January 31 The Ready Room 6:30 p.m. | $15 This is the release show for TOTH's new album, Dead, Everywhere, out now on Victory Records. Watch the video for "I've Got Secrets" from the new album here. (DH)

The Sal Show w/ The Good Earth, Tit for Tat, Ish Sunday, February 1 CBGB 9 p.m. | free By Joseph Hess As part of Chicago's Animal City, Sal bounced from drums to guitar slinging visceral pop tunes. As a solo act, Sal interacts with an onscreen clone of himself to bring jangly garage rock. At the heart of his stage antics sit catchy little melodies -- the kind that get stuck in your head. What the hell else are you gonna do on a Sunday night in February? (JH)