Slipknot Is Back...But Who's Buying? 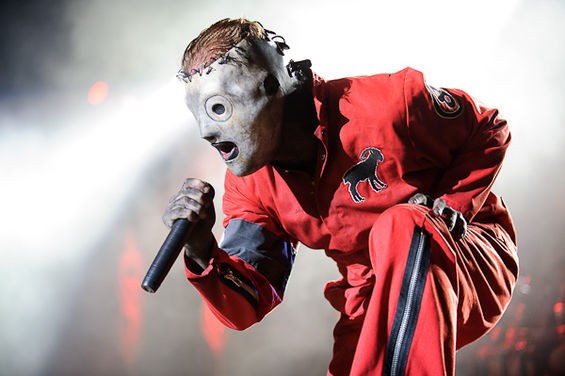 Late last year Slipknot rose from the ashes, releasing its first new record since 2008 and its first since losing drummer Joey Jordison and bassist Paul Gray in October. .5: The Gray Chapter has been praised as a return to form for the band, going back to the roots of its more successful sound on the album Iowa back in 2001. Slipknot is in the midst of a European tour with fellow nu-metallers Korn, and just this week the band announced a St. Louis stop at Hollywood Casino Amphitheatre.

This renaissance is surprising, to say the least. For the fans, it's welcome and overdue. For the rest of us, it's just raising all kinds of questions. Full disclosure: I always hated Slipknot, growing up in the era where the group was at its peak. But could that change? Could all these years have melted my icy heart?

See also: Six Nu-Metal Bands You Shouldn't Be Ashamed To Like

When I was a young teenager, Slipknot was everywhere. The group was one of the biggest metal bands on the planet, seemingly universally beloved. The members' masks and secret identities went over as well for them as it did for KISS in the '70s. People were intrigued by the fact that they presented themselves as these avatars.

It helped that the lyrics connected so greatly to what so many teenagers of the era were feeling. Where KISS traded in rock & roll cliches -- because that's what teens of the '70s were into -- my generation was an angry one, and Slipknot thrust itself fully into that niche.

The lyrics were so pissed off and miserable they felt dangerous. Songs like "People = Shit" convinced audiences that these guys could really be the sorts who would gun down innocents. Slipknot took everything Nine Inch Nails and Korn brought to the table and amped it up.

I couldn't relate. I was a sad teen, not an angry one. I never wanted to kill anybody. I was just filled with heartbreak. I listened to emo, not rage-filled music like this. Slipknot's lyrics never got over with me, and I thought the music stunk too. After all, it was essentially just slightly heavier radio-metal.

Not to mention, the mask schtick was just begging to be lumped in with lowest common denominator horrorcore bullshit like Insane Clown Posse. The whole gimmick reeked of the same desperation to be an outsider that painting your face and calling yourself a juggalo did. Emo found its roots in punk, so both traded in real, in-your-face attitudes complete with with raw, barren emotions. You didn't hide behind a mask in that scene.

So, yes, as a young man, I thought Slipknot was garbage. Not just garbage in the way that Korn or Limp Bizkit were garbage, but embarrassing garbage somewhere alongside liking ICP or liking Phil Collins. But here's the point I'm making by laying this all out: People change.

For example, I fell in love with Phil Collins somewhere around the age of sixteen and never stopped. My adoration for that man is endless. I would have called you so many names for appreciating No Jacket Required when I was younger, but now I consider Invisible Touch one of my top ten albums of all time.

See also: Jared Gomes of Hed PE Jumps Off Stage and Punches Heckler at the Gathering of the Juggalos

So let's set aside all this "embarrassing" stuff. I quit believing in "guilty pleasures" a long time ago when I started unabashedly embracing pop songwriting. Let's just look at where Slipknot is today.

Call it nostalgia -- or maybe it's just people too young to remember what it was like when Slipknot was around the first time -- but the band's stock has definitely risen. In 2014 people aren't ashamed to like Slipknot. They aren't mocked. In fact, Slipknot has become legend. The group is practically the Metallica of its time period. If you like heavy music nowadays, you probably love and respect Slipknot.

That's a huge change from the way it was when I was growing up. That also intrigues me, given the new album. Who is Slipknot now? Is it still the same band it was in 2001 or 2004? Could Slipknot win my heart now, removed from the stigma of the time period, removed from my biases and firmly established as a band with real, honest-to-God street cred?

On the real? Not really. .5: The Gray Chapter sounds pretty much like typical Slipknot. I can definitely see where critics and fans alike find it to be a return to form. Though I haven't honestly listened to Slipknot's 2008 "experimental" album, All Hope Is Gone, I have heard that it found the band in a less than stellar place.

One might say that's what a band like Slipknot gets for tampering with the formula. That's not to say that it shouldn't do so; I've long defended bands for taking artistic detours. However, Slipknot's core fan base is not exactly one that takes change with flippancy. See: Load, Metallica.

So even though I lack the context to put into perspective how refreshing The Gray Chapter might sound to a fan disappointed by All Hope Is Gone all those years ago, I can at least understand the sentiment. However, that puts me in a unique position listening to this new album: I have no nostalgia for it to live or die by.

So my initial impression is that, though it sounds like Slipknot, it also sounds like a million other bands in the world. Suddenly, I find myself appreciating how great Slipknot's influence has been on heavy music since its debut in 1999. It becomes easy to see why this legacy is so firmly cemented. The copycats lend an air of credibility, since Slipknot was so early to the party.

It engenders a certain respect in me, knowing that I like a good deal of bands who probably draw heavily on that sound. I can hear parts here and there when I'm reminded of newer bands, clearly ones who've spent a lot of time listening to Slipknot back in the day, that I love, and then it makes me like Slipknot just a little bit more.

But is it a great record? If you're a fan of Slipknot, it just might be. For the rest of us, it's business as usual for a band that, for the most part, fails to impress. There are a few segments, like one melodic part in the song "AOV," where I find myself digging it. But even though bands I love draw from Slipknot, I still think those bands synthesize what they may have learned from Slipknot to write superior music than their forefathers.

Even though I certainly find myself begrudgingly giving Slipknot props, I still can't say I'm a fan. On the other hand, I can see its members have done very well at what they do this time around, and if you like what they do, you're probably going to love this album, warts and all. "Killpop," the ballad-y pinnacle of cheese on the record (in my opinion), might be your new jam. For that, I admit, the veteran group has succeeded. I might not like it, but I do finally get it.

Slipknot's "Summer's Last Stand" tour with Lamb of God, Bullet for My Valentine and Motionless In White will come to Hollywood Casino Amphitheatre on August 16. Tickets are available Saturday, January 31, at 10 a.m. via LiveNation.com.