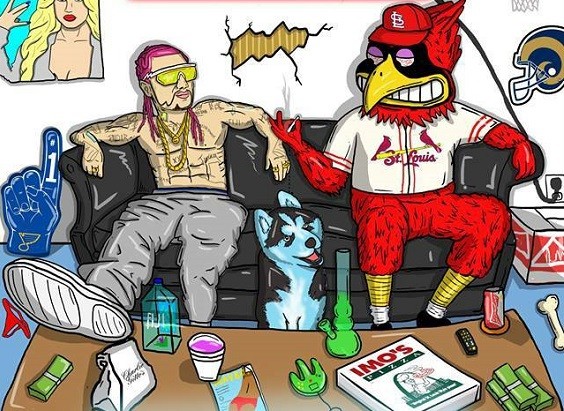 Riff Raff is coming to town -- maybe you already knew. The Diplo-approved rapper also known as Jody Highroller will make a stop at the Ready Room on February 8 -- the last time he came to town was May 23, when he brought giant cardboard cutouts of his own face, venue-shaking trap beats and ratchet babes with him. This upcoming show should be no less a lesson in the absurd.

Case in point: Check out this awesome flyer for the show.

Here we see Fredbird, the lovable and long-running mascot of the St. Louis Cardinals, passing what looks to be a joint to Mr. Raff. An Imo's pizza box sits on the table, as well as a doggie bag from Charlie Gitto's Italian restaurant -- both STL-based dining establishments. The Blues and the Rams are represented as well, and the alcoholic beverage of choice is Budweiser. This is probably as representative of St. Louis as any of the living rooms of STL's residents, if not moreso.

We reached out to promoter Mike Judy, who is putting this show on along with Wasted Potential Presents, to learn how the flyer came about. He tells us it was drawn up by Jake Reeder, a Chicago-based founder of Wasted Potential.

"They've done them for several markets and just pieced in and out things per city," Judy explains. "It's pretty cool, but I was kinda iffy at first. The original Fredbird was wearing No. 1. That's Ozzie's number, and it's retired, dammit!"

A Google image search turned up versions of the flyer for Chicago, Illinois State University and Mizzou as well, with details changed to better represent those markets.

BONUS: During our conversation, Judy relayed Riff Raff's rider to us as well. Here is what it takes to get Riff Raff to play a show in your town:

For his part, getting involved in the Riff Raff game seems to have worked out well for Reeder, who announced this week on his Twitter page that he'd been tapped to design some merch for the rapper:

pumped to announce I had the opportunity to design some of RiFF RAFF's new merchandise! available soon. stay tuned! pic.twitter.com/fMQX1jUXFV