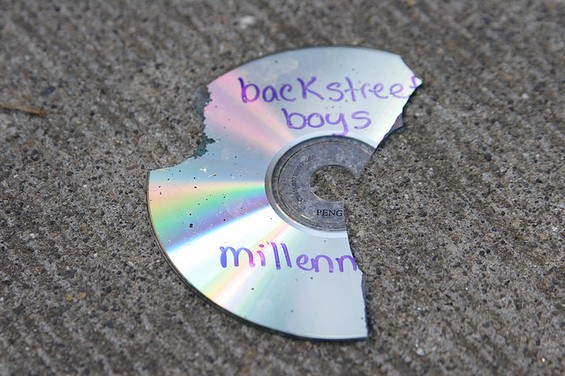 At the height of the dopey youthful experience, I had hundreds of rare European import CDs piled up and displayed by some sort of giant lava lamp rack. They're all gone now, save for a few jewel cases that are sitting in a burlap sack in my bathroom for some reason. I sold them so I could buy weed. I don't miss them, either.

Because I hate CDs.

Thankfully, there are some allies in the mainstream who have recently joined my fight against one of the music industry's biggest mistakes. Not long ago, the auto manufacturer Hyundai stated that they planned to phase out CD players in vehicles, replacing them with units designed specifically for phones and other portable music devices -- something that should have been standard in all cars since probably 2009. The announcement should be interpreted as a formal call of victory: CDs are dead.

When you picture the compact disc and all the associated headaches with owning them, it's almost impossible not to envision a devious cabal of reptilian alien record executives wringing their hands. "They're cheaper, but we'll charge more for them. They're fragile and easily ruined, so we'll place them in a case that's even more fragile and more easily ruined. And when they're unplayable, they'll just have to buy the album again."

As acidic tears of joy drip from their optical conduits, the scaly bastards celebrate with glasses of septic system cleaner.

But in addition to wreaking havoc on our pocketbooks and cluttering our cars and homes, the repercussions of making CDs the standard extended further than our interstellar enemies could have ever predicted. CDs paved the way for the disposable mentality of music listeners that eye-rolling artists constantly whine about today.

They're so cheap and easily created, eventually any asshole could burn a 60-minute album of garbage and unleash it upon the world. No need to put your best foot forward like the bands of yesteryear who spent their entire savings on pressing a single song on vinyl. These circles of sheer evil actually enabled delusional and arrogant bands to cake the entire medium in crap. Why not, right? Plenty of room for a seven-minute guitar solo in your hackneyed version of the Rolling Stones' "Paint It Black."

And did the listener mind? Not particularly. CDs allowed you to still pledge some form of allegiance to the band while allowing you to directly skip to the only two decent tracks on an album. If you didn't like the rest of the album, you didn't have to listen to it. No need to get familiar with the brilliant ambient track that the artist meticulously placed before the single. Just finger the "next" button as you thoughtlessly violate the vision of the album's creators. With the CD, you'd never have to suffer through the tyranny of getting familiar and intimate with a complex piece of art to truly understand it.

Nah, that's for those rot-brained dinosaurs with their visually captivating vinyl records and their foolishly durable portable cassette tapes -- those "fad" mediums that people keep forever and pass on to their children and that have still remained playable after decades.

While it's fairly unlikely you're going to see a mass movement to bring cassette players back to cars, we can all collectively rejoice and dream of a new age when CDs are a humorous relic of the past. At the very least, seeing a major car company admit that they have no utility to the modern consumer is a step in the right direction.

So go ahead and take your compact discs and get some genuine satisfaction out of them for once. Stab them with knives, melt them in your toaster, or throw them in the microwave and watch a glorious light show -- it's about the coolest thing they'll do next to sitting on a glowing lava lamp rack.