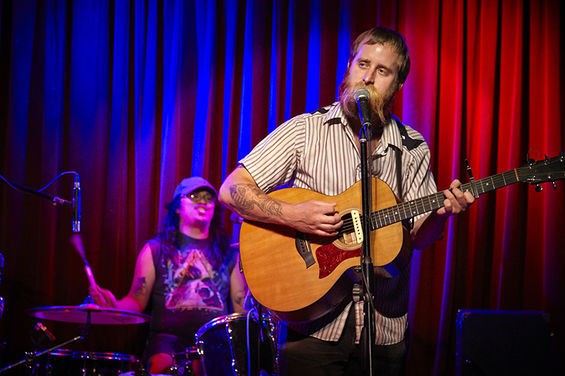 Album release shows are like birthday parties, but for bands. These events tend to be overhyped affairs, and for good reason -- they bring out family members, old friends and casual fans alike. And this weekend, St. Louis bands are releasing their records en masse: Bo and the Locomotive slings its soulful indie rock tonight while Ashes & Iron delivers metal to the masses on Saturday. Country fans can find new favorites in Jack Grelle or Falling Fences. To those who just want to party: Scroll down to Dudes Weekend and start to pre-game.

Bo and the Locomotive Album Release Show w/ Middle Class Fashion, The Carondelettes Friday, January 23 Off Broadway 9 p.m. | $10 This show will serve as the release for Bo and the Locomotive's latest, It's All Down Here From Here. Can't wait until tonight? Well, you're in luck: We have an exclusive stream of the album for you right now. (DH)

The Driftaways Album Release Show w/ Dub Heezy, DJ Trouble Friday, January 23 Station House 9 p.m. | free The Driftaways sling ska that pays proper homage to the genre's reggae roots. But don't expect a laid back night -- this is an CD release party, after all. Whether you're well versed in the ways of proper skanking or you just dabble in checkerboard pants, this show is free. Ska-vengers assemble! (JH)

Dudes Weekend w/ Bassamp and Dano, Better Days, Better OFF Damned, Braddock, Breakmouth Annie, Brickfight, The Chill Dawgs, Cool Mutants, Dethwarrant, The Dopamines, Eaten Back To Life, For The Last Time, The Fuck Off And Dies!, Guy Morgan and the FT Crew, The Haddonfields, Horror Section, Indonesian Junk, Lesser Apes, Nato Coles and the Blue Diamond Band, No Two Waynes, Pastaways, The Rackatees, The Raging Nathans, The Right Here, The Slow Death, Spruce Bringsteen, The Strait A's, Thirty Helens Agree, The Timmys, Two Houses, Ultraman, The Winchester Friday, January 23, Saturday, January 24, Sunday, January 25 Fubar 4:20 p.m. | $10-$30 This is going to be a drunken free-for-all of pop-punk hedonism and madcap one-upsmanship. Chug a handle of whiskey before you leave the house and wear a helmet for maximum pleasure. (DH)

Angel Romero Saturday, January 24 The Sheldon 7:30 p.m. | $26-$30 Angel Romero made his professional debut as a Spanish classical guitarist at the tender age of six. What were you doing when you were six? That's right: Wiping boogers all over the walls of your poor mom's house. Call your mother, you cretin. (DH)

Ashes & Iron Album Release Show w/ Fister, Indian Blanket, Heroes of the Kingdom Saturday, January 24 The Firebird 8:30 p.m. | $10-$12 Ashes & Iron's new album The Wind Takes a Side will be available at this show on color vinyl with hand-screened covers. Make sure you catch Indian Blanket and Fister as well -- two of STL's finest bands, oft-lauded in the pages of this paper. (DH)

Bear Cub w/ The Potomac Accord, Humdrum Saturday, January 24 Schlafly Tap Room 9 p.m. | free Bear Cub makes a prog-rock that never drags or wears out its welcome. Bass melodies tumble over heavy rock beats, forming depth through a shapeshifting polyrhythm. Humdrum shows have become somewhat a rarity, and that's really a shame. The band's last outing We Are Electricity (recorded by Steve Albini) showcases some of the strangest indie rock to come out of St. Louis. (JH)

Jack Grelle w/ The Hobosexuals Saturday, January 24 Music Record Shop 2 p.m. | free Music Record Shop opened in the Grove last year at the height of a battle between venues and private residences. Located between the Ready Room and the Demo, the cozy record store offers the occasional live performance -- a perfect time to dig the crates. Jack Grelle and the Hobosexuals both bring country songs with an indie slant, a solid soundtrack for perusing.

Shooter Jennings w/ Waymore's Outlaws, The Billy Berry Band Saturday, January 24 The Mad Magician 7 p.m. | $30 As the son of Waylon and Jessi Colter, Shooter Jennings has fully absorbed the "Nashville sucks" myth; the pose would be tiresome if Shooter weren't such a deadeye songwriter and band leader. (RK)