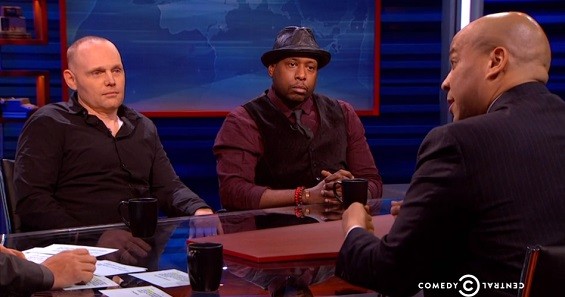 Filling the enormous vacuum left by Stephen Colbert's departure from Comedy Central is The Nightly Show with Larry Wilmore, a late-night talk show that now follows The Daily Show. The program debuted this week, broaching the topic of the protests in Ferguson in its very first episode.

Indian model/actress Shenaz Treasury and New Jersey-based U.S. Senator Cory Booker joined comedian Bill Burr and rapper/activist Talib Kweli in a freewheeling panel discussion about the unrest in the St. Louis suburb that was sparked off by the killing of eighteen-year-old Michael Brown by then-Ferguson police officer Darren Wilson as well as the overall "state of the black protest."

"You were on the front lines of the Ferguson protests," Wilmore said to Kweli early in the segment. "I saw some interviews on CNN; you were right there. Did it feel like any of that really made a difference?"

"For me, personally, it always does," Kweli responded. "Protest is a long game. You know, you think of the Montgomery bus boycotts -- it's not so far in the past for us, and that took a year and a half. And that was very strategic -- they chose Rosa Parks to be the person."

"Does it ever feel like the situation gets worse because we're out the protesting?" Wilmore then inquired. "Like, Bill, does it seem.... Are white people tired of black protest? Speak up for all of the white people, Bill."

Through laughter, Burr responded, "Speaking for all white people? Uh, I don't know. I gotta be honest with you: 'Is protesting legal?' would be my question. Because it seems like they say it is, but then the cops show up immediately, and then there's a fight, and then everybody gets arrested, and then it's over. So I don't know, like....I don't know if you're allowed to."

The panel then discussed the legacies of famed non-violent protesters Mahatma Ghandi and Martin Luther King Jr., occasionally again calling upon Burr to speak for all white people ("How did I end up on this show?" he said at one point. "I'm sitting here with my Aryan haircut, here -- it's not a good look.")

Toward the end of the segment, Burr -- a comedian well-known for his controversial remarks -- relayed his skepticism regarding protests in general.

"I'm extremely pessimistic with all this stuff," he began. "Even when you're talking about protesting, I don't believe, like, peaceful protests -- I don't know if that, in this day and age, gets you anywhere. And I just think throughout history the only way -- I shouldn't say this -- but if you read, the only way you affect great change is ridiculous acts of violence."

The shocked panel balked at this remark, with Treasury exclaiming, "Oh my gosh, no; that's not true."

"I'm not advocating it!" Burr insisted.

"I could find you a white guy who could dunk. I could find, like, the exception to the rule," Burr replied. "But generally speaking, people with no morals whatsoever are the ones that affect change."

For his part, Kweli understood what Burr was trying to say.

"I agree with a lot of the sentiment of what Bill is saying, because we wouldn't be talking about Ferguson if there wasn't a riot," he said. "Or if it wasn't a story about a riot -- because in my experience it wasn't really a riot -- but if there wasn't a story there....So that's important. It's important to understand that this protest, protesting, needs to have that type of thing.

"Right," Wilmore said, closing the segment. "And sometimes through the pain and the noise and the fire and the anger, sometimes we can find peace."

Watch the full segment below; catch episodes of The Nightly Show each night at 10:30 p.m. CT.