St. Louis Duo the Funs Kicks Off 2015 With an Art Show and a New Cassette Tape 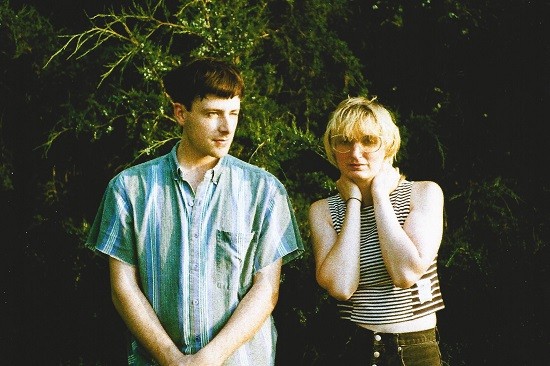 "Without an ounce of sarcasm, art and music saved our lives. I know it's sort of cliché, but we're really sincere about that," says Jessee Rose Crane, musing on the title of her art exhibit now showing at the Kranzberg Arts Center through February 4. "This Could Save Your Life" brings a culmination of music and art -- two worlds that Crane says go hand in hand.

"My experiences as a band on the road fuel a lot of artwork that I do," she says. For the past five years, Crane and partner Philip Lesicko have toured and performed as the Funs, a two-piece rock band that reflects the couple's close relationship through dense, inclusive songs. The duo's swarming guitar plays Twister on the listener's ears while sharp beats propel the blissed-out sound into outer space. It's noisy indie-rock for the ADHD generation.

The band's lo-fi approach can be heard in full effect on Still Smoking, a five-song cassette released this past December through the Chicago label Athletic Tapes. The Funs have strong ties to the Windy City, owing in part to Crane's time at the School of the Art Institute of Chicago. The pair now resides in a 142-year-old building in New Douglas, Illinois -- a house they restored with little help from others.

"Basically, Philip's grandfather had abandoned this old farmhouse. It sort of became a burden on the family. They were going to have to tear it down eventually," Crane says. Building one space for artists and musicians to stay and work was a mutual pipe dream, a common landing pad for late-night conversations between the two.

"I think if we had known what we were getting into, we wouldn't have done it," Crane recalls. "We were naive and positive enough. But it was almost like a bomb had gone off and we came into it." They trudged through a lifetime of hoarded junk -- faded packs of gum, bent silverware and hundreds of white T-shirts sat in bloated cardboard boxes. Everything was moldy or corroded, partly due to the giant hole in the roof.

The Funs worked between tours to reclaim the space taken over by time. Once a museum of lost things, the house now stands as a recording studio and general workspace for art. Much of the imagery Crane encountered through this renovation served as direct inspiration for the pieces found in "This Could Save Your Life."

"As an artist I'm already a pack rat and a hoarder, and this has really taught me to use things, recycle them or pass them on," Crane explains. "It's given me perspective on what I buy. I consume less, I buy less. After looking at a lifetime of memories, I take that into account."

"Working on the house has given me a different outlook on materials," Lesicko chimes in. "Making something beautiful out of the cheapest shit you can get. It has an illusion of being very expensive." Lesicko also has three large-scale pieces in the art show, which reflect distorted notions of fame and celebrity culture. He takes to task the lack of sincerity in the music industry, using imagery of warped feminine figures.

When the Funs started in 2009, the band played on pawn-shop guitars and broken drums out of necessity. Five years later, Lesicko still feels more comfortable working through low-cost materials. His own art, often seen in the band's album covers and show posters, remains black and white due to the low cost of printing in monochrome.

"I know it and I can control it as much as I need to," Lesicko says. "If I had all the money in the world, it doesn't mean I can make a really good album or piece of music. I'm just a working-class person that's self taught. You have to work harder for it, so it means more."

Lesicko takes DIY seriously. Counting the group's latest release, much of the Funs' music is self-recorded. The tours? All booked without the help of a publicist or an agent. He even landed the Funs an opening spot with seminal art-rock group the Breeders, simply by contacting the band directly.

"Music is thought of as magic to some people," he says. "There's a responsibility to be honest, to be sincere. But it's a rare thing to be an artist or musician and be sincere."

"This Could Save Your Life" marries art and music through visual works that challenge gender roles, the concept of fame and consumer culture. The exhibit is now showing through February 4 at the Kranzberg Arts Center, 501 North Grand Boulevard, 314-533-0367.