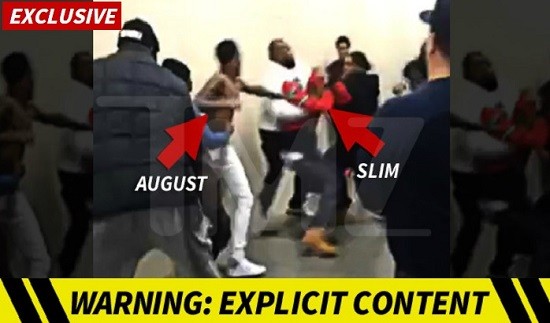 This past Saturday, January 17, Chaifetz Arena played host to the State of Emergency 2 concert, featuring rappers 2 Chainz, Yo Gotti, August Alsina, Fabolous and Migos. The show was billed as one supporting the local anti-violence campaign Put Down the Pistols, with a portion of the night's proceeds allocated to the cause. The show was also meant to honor the late Mike Brown, the Ferguson teenager killed by police officer Darren Wilson in August. (Brown's father, Mike Brown Sr., even made a statement onstage.)

Despite these admirable intentions, chaos reigned backstage as New Orleans R&B star August Alsina and his entourage got into a heated brawl with show promoter LooseCannon SLIM.

TMZ has the video:

First we see a volatile exchange in a hallway between the two men, each backed by their people, before the punches start flying. The video then smash-cuts to later in the fight, when Alsina can be seen rushing back into the fray and striking SLIM as other members of Alsina's entourage drag him to the ground and begin kicking and stomping him.

A second video published by TMZ provides a clearer angle of the latter portion of the altercation:

The reasoning behind the tussle remains unclear, with sources providing several conflicting explanations. TMZ's original report claimed "Slim got upset at Alsina for showing up late." The gossip news site's supplemental article says Alsina "was offended he had to perform before the group Migos...because, in his mind, he's way bigger than the 'Versace' rappers." A later update of the article claims that Alsina's people "say August had no issue going on before Migos -- and claim the real issue is the promoter delayed paying August until 2 hours before the show. They say artists usually get paid as soon as they get into town."

Adding to the confusion, The Shade Room pins the blame on the unorganized nature of the event, reporting that there had been issues with the sound all night and Alsina "wasn't too happy about how the show was running." (Rapper Fabolous, who can be seen looking on with a drink in his hand at the end of the top video, reportedly did not perform owing to the concert not running on time.)