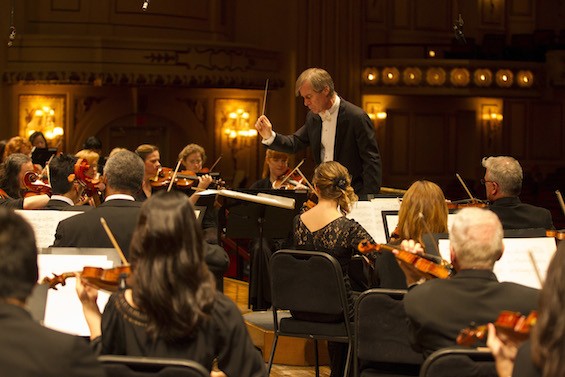 That long-held lesson from the famous children's television show on PBS is being brought to life by the St. Louis Symphony and KETC-TV, the Gateway City's own PBS affiliate, as they join forces for Night at the Symphony. Launched on Channel 9 just days into the new year and continuing monthly, the series solidifies a partnership between two of St. Louis' cultural pillars and brings viewers a symphony experience unlike anything they'd seen on television previously.

"I think we're just at the beginning of a really exciting journey," says Patrick Murphy, executive vice president of production at KETC, also known as the Nine Network. "After all this time, I'm still amazed by the magic and potential of television."

For Night at the Symphony, KETC and the St. Louis Symphony combine resources, knowledge and best practices into a monthly, hour-long television program that not only showcases the symphony's world-class sound but also introduces viewers to key personalities that make our orchestra so beloved. Interviews with musicians are framed by multi-camera views of the symphony in action and the bustle of Grand Center as patrons fill Powell Hall. During the first installment on January 5, the program brought violinist Joo Kim and cellist James Czyzewski to the forefront -- two soloists during the all-Tchaikovsky concert who, as married performers, share quite a different kind of bond than the other musicians might.

"Our philosophy for this is 'Peek behind the curtain,'" says Erika Ebsworth-Goold, publicist for the St. Louis Symphony. "They [Kim and Czyzewski] are married. They're adorable. Why wouldn't we want to feature them during the Tchaikovsky program -- when they're both soloing -- and interview them together about what it's like to be married to a member of the orchestra that you're in and both have big solos on the same night?

"They're wicked-talented musicians, but they're also real people, real St. Louisans. They live here, they've got families and they're great to talk to," she continues. "It was just a great personality piece. When you pair up those stories with impeccable music, how can you go wrong with that?"

Watch a teaser for Night at the Symphony below, and then watch the full episode here:

Storytelling is an important element in Night at the Symphony, no matter if it's through interviews, production value or the classical music itself. The concept isn't new to the symphony or to the Nine Network -- they'd collaborated previously for Living St. Louis programs or one-off specials -- but the focus on a regular program with consistent themes and its own branding is what's driving this new experience. And it had been percolating for quite a while.

"Patrick and I started talking, and we both realized that Channel 9 hadn't been in Powell Hall for years. We wanted to jumpstart the relationship," says Adam Crane, vice president for external affairs at the St. Louis Symphony. "We had the ability to do that now. We could give them content now."

By all accounts, the first telecast and its rebroadcast a week later seems to have resonated with audiences.

"We reached over 10,000 households last week -- more than 20,000 people," marvels Murphy, who adds that the Nine Network is frequently the top-rated PBS affiliate in the country. "Now it's like we have the potential to bring the music of the St. Louis Symphony, which is one of the best symphony orchestras in the world, to every household in St. Louis. It kind of blows me away a little bit."

On page two, learn how St. Louis could lead the way for other symphonies and PBS affiliates.

Bringing a high-quality series about classical music to life and having it become successful so quickly is no easy feat, though many television outlets have tried. But Night at the Symphony isn't like those older programs that simply positioned a camera on the balcony to point down at an orchestra and shoot indiscriminately.

"What is good television?" Crane asks, noting that the answer would be paramount to the success of the program. "Classical music is very hard to make into good television. I've certainly learned that along the way with this programming."

"What happens on the stage -- we already know it's world class and it's amazing," Ebsworth-Goold adds. "But the art form is really old, and it's not exactly breaking news."

Indeed, it takes quite a crew to successfully produce Night at the Symphony for today's discerning viewer. Four camera operators throughout Powell Hall and on the stage film every action the musicians make, while a conductor who's intimately familiar with that night's music advises the cameras about timing and upcoming solos. After filming, Paul Hennerich of Pan Galactic Company enhances the audio mix, and video and audio are married into the final product viewers see and hear on Channel 9. The Nine Network and the St. Louis Symphony have managed to create a dynamic, on-trend series at a surprisingly high production value with minimum budget -- something important to these two non-profits that have become cultural cornerstones in St. Louis.

"There's no substitute for the actual experience of sitting in Powell Hall and witnessing the symphony," cautions Murphy, "but in a way, you've got one of the best seats in the house. DVD quality -- completely as good as it gets."

"The musicians -- this is their life; this is important. They're trusting us with what they do, and we've been able to develop a level of trust with them, individually and with their union," Murphy continues. "We're able to do things that no other market in America has been able to do. It's just a wonderful combination. It really is a big deal."

No other market has a symphony/public television model yet, but with the success of Night at the Symphony, that might be on the horizon.

"[We could] give them a handbook, all the inside baseball of how to be able to do this. We know how to do this now," Murphy says. "This really has the real potential of what television can mean and what it can do. This is the original mission of our [KETC] founders 60 years ago -- to be able to take really cool stuff like the symphony orchestra and bring it to people's houses, which before was never possible."

And it's happening because of collaboration. The St. Louis Symphony already had been working with 90.7 FM KWMU (St. Louis Public Radio) on highly successful weekly broadcasts, and this new partnership with the Nine Network only strengthens the orchestra's place among cultural touchstones both in St. Louis and throughout the nation.

"For us it's all about relevancy. The fact that St. Louis Public Radio and the Nine Network feel that we are relevant enough to give us primetime coverage on both of their networks on a regular basis in a partnership form, that's pretty unique," Crane says.

"I hope that this is the beginning of a very long relationship with Channel 9," Crane continues. "We're lucky to have such a committed PBS station in our market. They really want to be active in the arts and culture scene, and that's special."

Night at the Symphony is broadcast at 7 p.m. on the first Monday of every month on KETC-TV Channel 9, with a rebroadcast the following Sunday. The next installment, scheduled for February 2, will feature St. Louis Symphony music director David Robertson conducting selections by Mussorgsky, Massenet, Tchaikovsky, Grieg and Copland, with featured violinists Dana Edson Myers and Rebecca Boyer Hall. For the full schedule, visit ninenet.org/symphony.