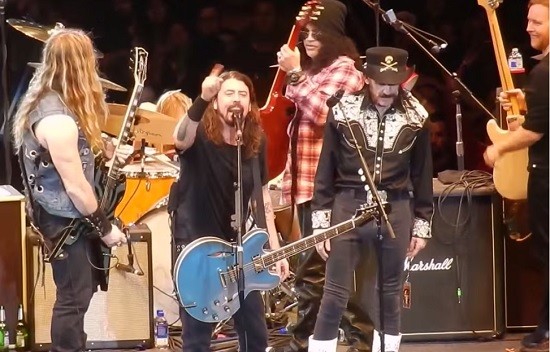 This past weekend Dave Grohl threw himself one hell of an early birthday party. The ubiquitous Foo Fighters frontman, who turns 46 tomorrow, showcased a who's who of rock talent Saturday at the Forum in Los Angeles, with appearances by Paul Stanley, Alice Cooper, David Lee Roth, Zakk Wylde, Lemmy Kilmeister, Tenacious D, Slash, Perry Farrell and Trombone Shorty.

The show was announced early last week. Despite the short notice, it sold out in short order, bringing 17,000 fans into the house -- even though no details about the night's festivities were announced in advance. Those fans gambled and won, and were treated to a nearly four-hour long arena rock spectacle that is already an exceptionally early contender for 2015's concert of the year.

The show was performed on a round platform that rotated periodically to give everyone in the venue a decent view. The members of the Foo Fighters remained onstage throughout, as the night's guests came up one by one and performed a bevy of cover songs with the group. Our sister paper, LA Weekly, had a reviewer in the house who brought back this photo of the action-packed setlist: 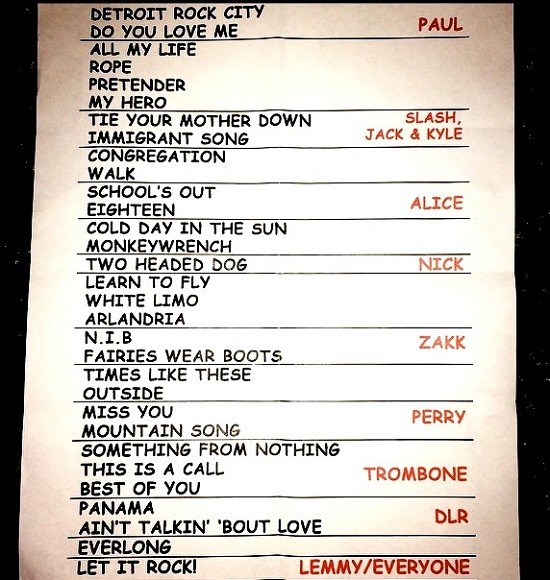 Slash and Zakk Wylde, who had each taken their turns earlier in the night, both returned to the stage as well, joining Lemmy and the Foos for a rousing, show-stopping rendition of Berry's "Let It Rock."

"And just so you know," Grohl assured the crowd at the start of the song, "Lemmy smells so fucking good, you don't know it."