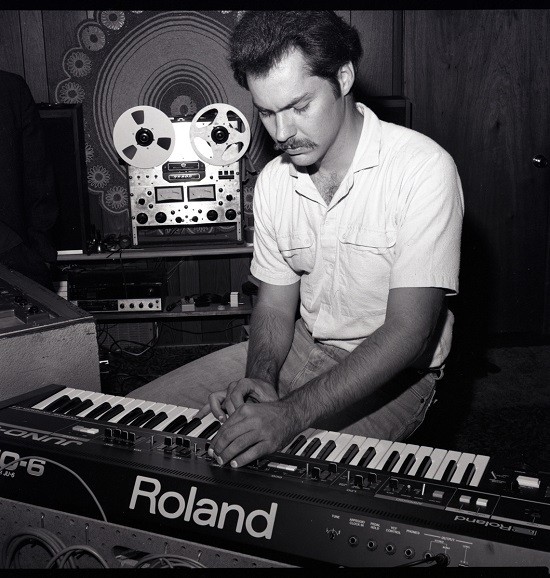 In the early 1980s, synthesist and programmer Walter Whitney composed music with tech-savvy guitarists Carl Weingarten and David Udell in the group Delay Tactics. Their work, collected on albums released by Weingarten's Multiphase Records label, was inspired by the ambient and fusion works of artists like Brian Eno and Robert Fripp. The group's 1982 debut, Out-Pop Options, even features a track called "Chasing Moroder," if that gives you any hint at its influences.

While all three musicians were avowed experimentalists who embraced the then-modern vanguard of digital technology, Whitney was responsible for rhythm programming and manning the synthesizer. He released a solo album called Composer X in 1983 but, as this digital collection suggests, Whitney has a trunk filled with his solo compositions that never saw official release. Released on January 1, Phantom Worlds collects fourteen tracks that are date-stamped with a glossy sheen of '80s synths and drum machines.

Because this is archival material, Phantom Worlds lacks a narrative arc and stylistic coherence, but that's just as well since Whitney seems to compose his songs as little dispatches of either mood or melody. Most establish a canned rhythm and repeating chord structure over which Whitney solos on synth or guitar. These songs suggest the kind of sci-fi cubbyhole into which synthesizer music is usually placed — "Land of the Lost," "Mysteries of Science" and "I Bring You Peace" are fodder for B-movie soundtracks in title alone.

The seven-minute centerpiece "After October" is the most amorphous song of the batch, eschewing a rhythm track in favor of modulating synth pads and what sounds like an electronic emulation of a flute. Elsewhere on the collection Whitney shows his pop aspirations; the fittingly titled "Cotton Candy" takes a peppy rhythm track and bright sine-waves to the beach. Slap a sax solo on it and you'd have a perfect sitcom theme song.

"Night Drive" boasts the kind of automated rhythm and accompaniment found on your better Casiotones and uses it to bolster Whitney's guitar leads, which can range from naive to proficient as he channels both prog-rock and classical guitar styles. "Play It Right!" is one of the more winning cuts here, with a chip-tune piano part that offsets the King Crimson-like guitar leads like a proggy Atari soundtrack. Whitney promises more music, both old and new, in the coming year, but fans of experimental and electronic music will at the very least be curious to hear these oft-fetishized vintage instruments as they sounded fresh out of the box.

Stream the new album in its entirety below: