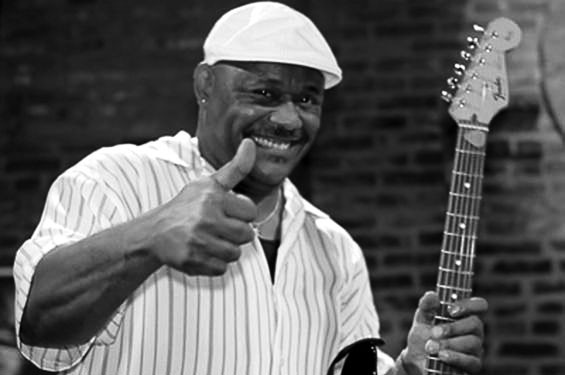 A long-time presence on the St. Louis blues scene, guitarist, singer, bandleader and songwriter Alvin Jett passed away on December 23. He was 54.

Jett grew up in East St. Louis, Illinois, in a large family of thirteen children. His father played drums with blues legends Little Milton and Albert King, and he gave Jett his first guitar. After his discharge from the Navy in his early twenties, Jett threw himself into music, and like many aspiring bluesmen in the St. Louis area, he learned from the elder statesmen of his day, particularly Tommy Bankhead, with whom he played for three years in the Blues Eldorados.

Jett was a regular contributor to the St. Louis Blues Society and its Guitar Masters concert series, and he is remembered for hosting numerous jam sessions in which he encouraged and mentored a younger generation of musicians. The bands he led included the Alvin Jett Band, Jett Sett, No Exit, the Hired Help and ultimately Phat noiZ, the group for which he's now best remembered. With Phat noiZ he recorded three albums -- Wet My Beak, Milk and Cookies and Honeybowl -- and garnered awards from the International Blues Challenge and the International Songwriting Competition.

Marc Chechik, who played with Jett in the early '90s, recalls him as a formidable and inspiring guitarist: "He was a phenomenal lead player, really intuitive. He could go toe to toe with anybody, and he synthesized a huge number of styles. He could mix in Motown and Memphis styles and hardcore Chicago blues. And he did it effortlessly. He was clean, fast and soulful. You don't find that very often."

Saxophonist Frank Bauer began working with Jett in 2000 in the cover-based band the Hired Help and later helped form Phat noiZ. "In one of those early sessions we started off with a pretty common standard, and then he called off a song in a key I wasn't comfortable with," Bauer recalls. "I told him I was going to lay off. But when the solo came around, he looked at me and grinned, 'Go ahead.' And I was like, 'No man, I just told you I wanted to lay off.' He leaned over like, 'Go ahead, you can do it.' That's the way he was. He would try to draw the music out of you. He wouldn't just let you sit back."

Matt Davis, who currently fronts the Lucky Old Sons, played bass in Phat noiZ. "I wasn't really into the blues scene when I first met Alvin," Davis recalls. "I didn't know the people in that scene. I was just blown away by his guitar playing, showmanship and the way he radiated confidence onstage. It would win audiences over and make you play better, too. He was also really supportive of me and Frank [Bauer] and anybody else who had a song. It wasn't like you were just in Alvin's band. He was very cool and open-minded."

In 2012, Jett moved to San Francisco to live with his brothers and, as Bauer says, "get his life back on track." He continued to perform in San Francisco and, according to Bauer, he was practicing his guitar when he died of a heart attack on the day before Christmas Eve.

Sylvia Jett met her future husband in 1990 and watched him develop as a musician. "Alvin loved life and was extremely passionate about music," she says. "That was the one thing he was consistent about. When I realized that was his gift, we planned out how he could do music for a living. Back then, he would sometimes play for just $20. He didn't care about the money. Sitting in the audience, I always saw how he made every person feel like he was singing and playing just for them -- whether it was for 5,000 people at a festival, or at home for my daughter and me, or down at BB's [Jazz Blues and Soups]. It was a gift, and it was electric."

There will be a memorial service for Alvin Jett on Wednesday, January 7, 2015, at 6 p.m. at the Gateway Area Bible Fellowship Apostolic Church, located at 85 Water Street in Cahokia, Illinois, 62206.

This Just In Too Soon