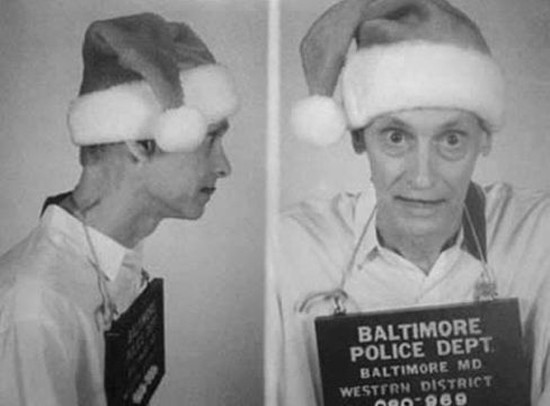 Joy to the world, it's a Christmas themed list! Oh and look, we even incorporated "punk" into it. It seems as if Riverfront Times has done it again. Look, we understand your concerns, but scan the internet. You'll find a bunch of pathetic lists with Fall Out Boy and that dopey '90s record from The Vandals. Scratch a little deeper and you'll find last holiday's precious gift: Punk Goes Christmas, a compilation with bands like All Time Low and Yellowcard - the perfect collection for your closest friend who still wears a Nightmare Before Christmas stocking cap.

While it would be easy to dig into these lists and records, we're all knee deep in holiday spirit. Instead, we'd rather give you a present. As pointed out in our recent "punk" themed list of Christmas songs, any decent deviant knows hits like Fear's "Fuck Christmas" or that goddamn Ramones song. So here's six ones you haven't heard.

Exhibit A of brilliant holiday songs you've been missing: The Night Stalkers' "Christmas Blue Balls" -- a tale which climaxes in fleeing from the cops with crotch-congestion. Good thing they used this John Waters wearing a Christmas hat mug-shot for the artwork as their other records all have human female breasts on them. But hey, they're French.

Lyrical Highlight: "She grabbed my crotch, ya know what it means / We started to fuck / when my dad came in / What what what get the fuck out of here!!''

Although this Pansy Division song found its way on the 10 Best Punk Christmas Songs list, the importance of this brilliant track can't be stated enough. Formed in the progressive city of San Francisco, the openly-gay members of Pansy Division have been blowing the minds of uptight squares since 1991. Click the video and watch as the holiday season has never been more festive -- then scribble "sequined leotard" on your Christmas list for next year.

Lyrical Highlight: "Don't be miserable like Morrissey / Let me do you underneath the Christmas tree"

Follow through for the rest of this special holiday edition of Nitpick Six. 4. Crucial Youth, "Xmastime For the Skins"

New Jersey's Crucial Youth were an odd bunch. With their bassist Gentleman Jim rumored to have been a 7 Seconds roadie, they most famously trolled straight edge/positive hardcore with songs like "Positive Dental Outlook" and "4 Food Groups." For some reason, they decided to record a take on the song "Crucified" by Iron Cross (popularized by Agnostic Front) called "Xmastime for the Skins" and release it on an EP titled "Crucial Yule".

Lyrical Highlight: "Everyone's having the time of their lives / Fighting with snowballs, not bottles and knives!"

Alright, this Minneapolis outfit didn't exactly write a Christmas song here. However, the lyrics do reference Santa Claus as being a myth, just like god! It lands on this list because, hey, you probably haven't heard it.

Lyrical Highlight: "Did he pay your rent or just save you from your sins? / Have you heard from Allah, Christ or the Great Pumpkin?"

Night Birds are one of the better bands of recent times fusing surf-rock with high energy punk. After spending 2013 on tour with the likes of the legendary Zero Boys, Red Dons and Tenement, this year they actually went out and released a total surf-rock EP called Monster Surf. But who cares about all that -- the only thing you'll probably remember anyway is the fact that they had a burning Christmas tree in the video for their angry, mid-paced rager, "Less the Merrier".

The most raw and unhinged record on this list, Finnish hardcore masters Terveet Kadet released an EP called Ääretön Joulu, which roughly translates into "The Infinite Christmas." And while it's an album, not a song, we'll overlook that in favor of its more important qualities. It's extremely odd, furious and -- most importantly for a punk Christmas -- it's very short.

What Google Translate Believes the Lyrics Are: "We are proud to go up pig carcasses / Puritan origin holes / Dogs are in the living room / Idiots fuck them"