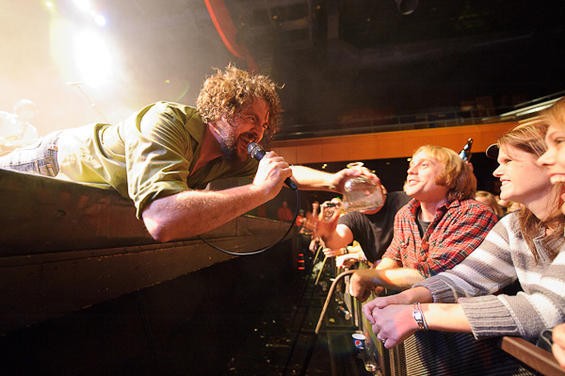 Now is your last chance to escape the house before the old ball and chain of holiday obligation weighs you down. Quick! Leave while no one's looking. El Monstero starts its string of sold-out holiday shows this weekend, but if you don't already have a ticket, have fun getting scalped on the streets outside the Pageant. There's great indie-rock, doom-metal and EDM this all weekend long, so pick your poison and get your fill before those awkward catch-up sessions with your estranged cousins.

El Monstero Friday, December 19 The Pageant 8 p.m. | $27.50-$47 El Monstero's string of (usually) sold-out X-mas shows has become a holiday tradition for many St. Louisans. The band is currently featured in our weekly comic. Did you know we have a weekly comic? Now you do! (JH)

Glass Animals Friday, December 19 The Ready Room 8 p.m. | $18-$20 Hailing all the way from Oxford, England! That's far away; show some support for these indie-rocking lads. Here's a video to show you what you're in for. It's from the band's debut album released earlier this year. (DH)

Googolplexia Friday, December 19 The Heavy Anchor 9 p.m. | $5 Calling Googolplexia a comedy act would be discrediting the man's ability to make a melody that sticks to the inner side of your skull. If you go, make sure you request the song about Mayor McCheese. (JH)

MiTiS Friday, December 19 Plush 7 p.m. | $13/$18 What sets MiTiS apart from the bulk of the EDM pack is the fact that he grew up as a classical pianist, only recently moving toward the lucrative EDM scene. In other words, the man knows a thing or two about composing a melody. (DH)

Bump and Hustle No. 3 Saturday, December 20 Blank Space 9 p.m. | $5 B&H's all-vinyl rule for its DJs is what makes it one of our very favorite DJ nights in the city -- much respect to those who still dig the crates. (DH)

Patterson Hood Saturday, December 20 The Sheldon 8 p.m. | $20-$25 Patterson Hood takes the stories of the Southern working class and works them into songs that float between country, folk and Americana. The Sheldon presents his songs on a grand scale. (JH)

Prodigy x Slum Village Saturday, December 20 Plush 8 p.m. | $25/$30 Not the lame "Firestarter" Prodigy -- this one is the guy who is one-half of the legendary rap duo Mobb Deep. An important distinction to make, I'd reckon. (DH)